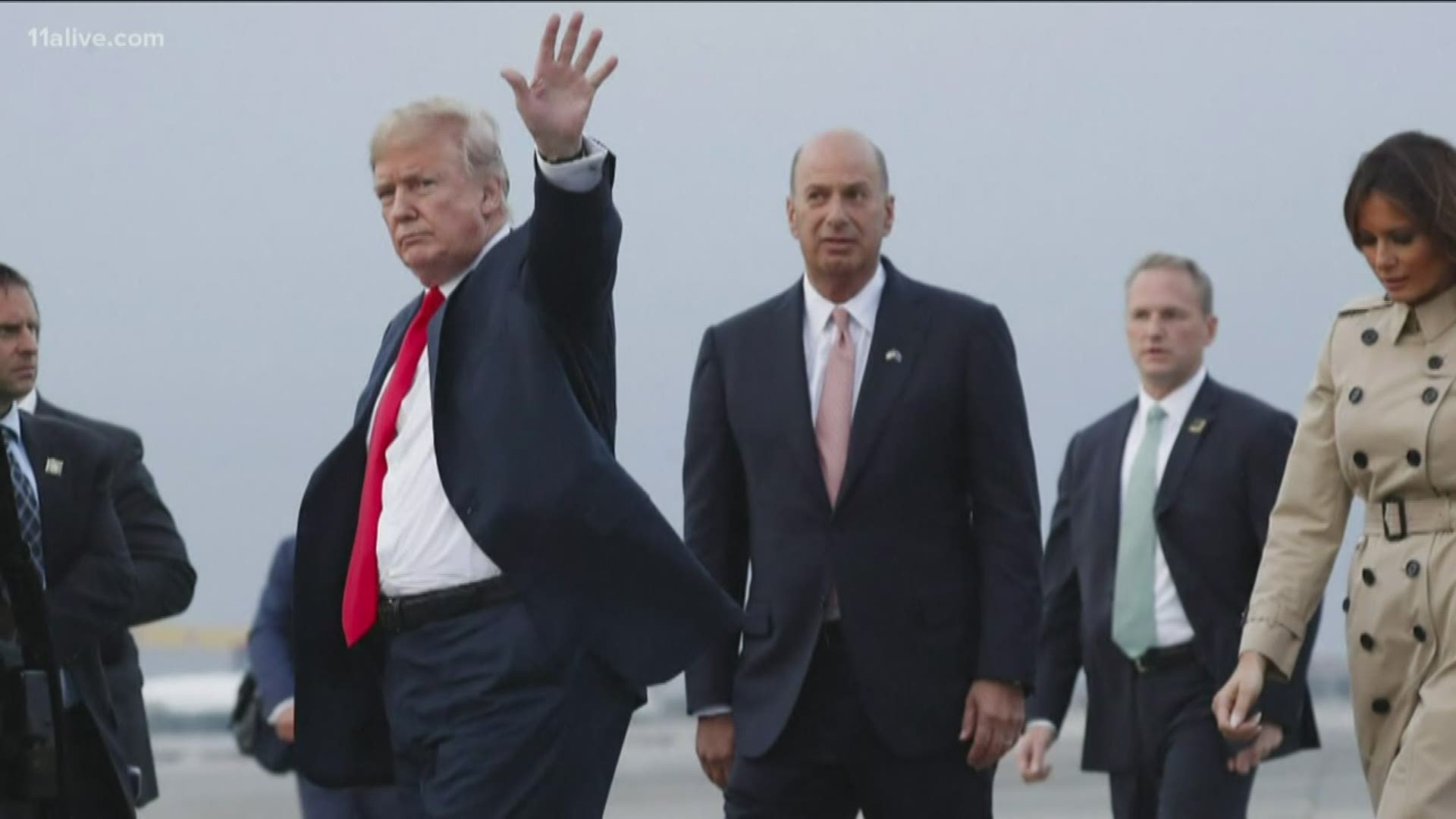 WASHINGTON — A State Department envoy told lawmakers it was his "clear understanding" the U.S. government intended to withhold military aid from Ukraine until the country committed to investigations sought by President Donald Trump, including into a political rival, according to a transcript of the closed-door interview released Wednesday.

William Taylor told impeachment investigators he understood that the security assistance, and not just a White House meeting for Ukraine's new president, was conditioned on the country committing to investigations of Joe Biden and also Democrats' actions in the 2016 election.

"That was my clear understanding, security assistance money would not come until the president committed to pursue the investigation," Taylor said.

He was asked if he was aware that "quid pro quo" meant "this for that."

The testimony from Taylor, the top U.S. diplomat in Ukraine, further connects the Trump administration to a quid-pro-quo agreement involving Ukraine that is now at the heart of the House impeachment inquiry.

Release of the transcript came as the Democrats launched a major new phase of the investigation with public hearings scheduled for next week featuring State Department officials, including Taylor.

All three have already testified behind closed doors in the first phase of the investigation. Yovanovitch, who was ousted in May at Trump's direction, told investigators she had been told to "watch my back" and that people were "looking to hurt" her. Both Kent and Taylor testified about their concerns about her dismissal as the president's lawyer, Rudy Giuliani, took a leading role on Ukraine policy.

Trump has denied any wrongdoing. But despite those denials, Schiff said Wednesday that the witnesses will show that "the most important facts are largely not contested" in the inquiry.

"Those open hearings will be an opportunity for the American people to evaluate the witnesses for themselves, to make their own determinations about the credibility of the witnesses, but also to learn firsthand about the facts of the president's misconduct," Schiff said.

RELATED: Former US Ambassador lays out Trump White House campaign to oust her

The Democrats are investigating Trump's requests for Ukrainian action as the U.S. withheld military aid from the country, which faces threats from its neighbor Russia. Trump, backed by Giuliani, asked new Ukrainian President Volodymyr Zelenskiy in a July telephone call to probe Biden and his family and to investigate Ukraine's possible role in the 2016 presidential election.

The Democrats are looking for connections between Yovanovitch's dismissal, the holdup in military assistance for Ukraine and Trump's push for the country to open investigations.

In his appearance last month, Taylor told lawmakers that it was the "unanimous opinion of every level of interagency discussion" that the military aid should be resumed without delay. He said the Ukrainians recognized that they had to commit to investigations to get the aid.

"I think it was becoming clear to the Ukrainians that, in order to get this meeting that they wanted, they would have to commit to pursuing these investigations," Taylor said. And they thought that opening the investigations, in particular on the gas company Burisma, which had hired Biden's son, would have involved Ukraine in the 2020 election campaign in the U.S.

They didn't want to do that, he said.

Taylor repeatedly conveyed concerns with the "irregular channel" that Giuliani had set up at Trump's instruction to bypass the embassy and the State Department.

Taylor said he had specifically raised his concern about the "irregular channel" with Secretary of State Mike Pompeo and told him he would resign from the job in Kyiv if strong U.S. support for Ukraine somehow evaporated.

"This would have been throwing Ukraine under the bus," he said. "And I told the secretary: 'If that happens, I'll come home. You don't want me out there, because I'm not going to defend it, you know. I would say bad things about it and you wouldn't want me out there doing that.'"

Republicans, signaling a line of attack they may pursue during the open hearings, downplayed Taylor's testimony by arguing that he received none of the information firsthand. Taylor said in the interview that he hadn't spoken directly to Trump and Giuliani.

In the final stretch of questioning, Rep. Lee Zeldin, R-N.Y., grilled Taylor on whether he had primary knowledge that Trump was demanding that Ukraine investigate the Bidens. Taylor said he had heard from other diplomats and understood that the demand had been relayed to them by Giuliani. Zeldin says that information was "secondhand or thirdhand."

The three committees that have been leading the investigation appear to be wrapping up the closed-door testimony this week.

Democrats on Wednesday withdrew a subpoena for former deputy national security adviser Charles Kupperman, who filed a federal lawsuit seeking guidance on whether he needed to comply with House demands for his testimony. They have also invited former national security adviser, John Bolton, to appear on Thursday, though Bolton's lawyer has said he would not come without a subpoena.

Democrats started releasing transcripts from weeks of private interviews this week, part of the new public phase of the probe.

Gordon Sondland, Trump's ambassador to the European Union, said in an addendum to his testimony released Tuesday that military assistance to the East European ally was being withheld until Ukraine's new president agreed to release a statement about fighting corruption as Trump wanted.

Taylor also detailed his thinking when he texted Kurt Volker, the U.S. special representative to Ukraine, and Sondland that he would quit if Zelenskiy gave an interview promising the investigations Trump wanted and then the military aid was never released. That text, in which Taylor described that scenario as his "nightmare," was previously released by congressional investigators.

In questioning, Taylor said that the "Russians are paying attention to how much support the Americans are going to provide the Ukrainians."

"The Russians want to know how much support the Ukrainians are going to get in general, but also what kind of support from the Americans. So the Russians are loving, would love, the humiliation of Zelenskiy at the hand of the Americans, and would give the Russians a freer hand, and I would quit."