From Baked Alaska to a guy with horns: notable riot arrests

Over one hundred people have been arrested so far on charges related to the violent insurrection at the U.S. Capitol, where five were killed. 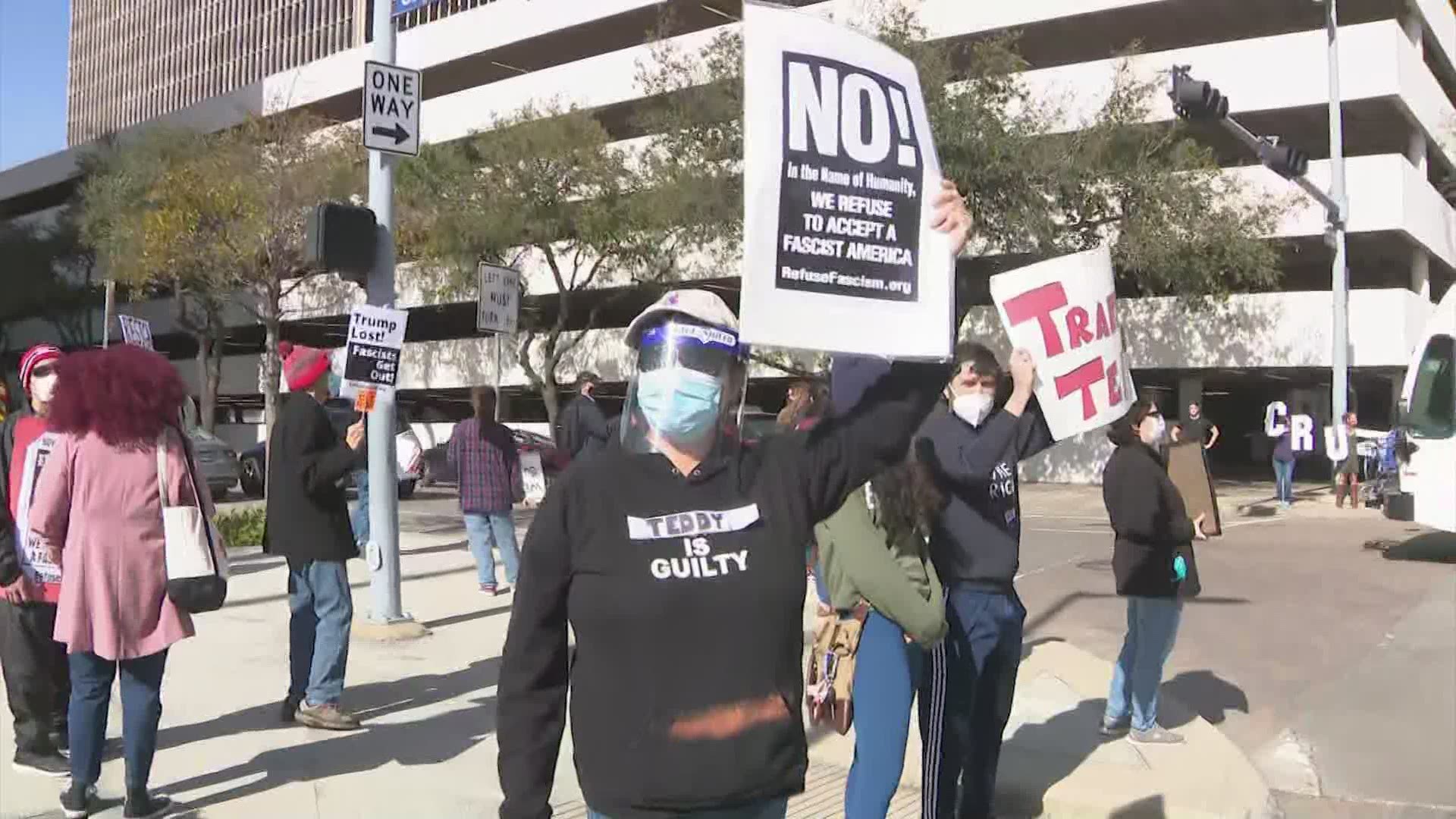 More than 125 people have been arrested so far on charges related to the violent insurrection led by supporters of President Donald Trump at the U.S. Capitol, where a Capitol police officer and four others were killed.

Charges from the Jan. 6 riot range from curfew violations to serious federal felonies related to theft and weapons possession.

From a man pictured kicking his feet up on a desk in House Speaker Nancy Pelosi's office to a far right-wing media personality known as "Baked Alaska" to the bare-chested guy sporting a furry hat with horns, here's a list in alphabetical order of some of the more notable arrests and allegations made by authorities.

Richard Barnett, 60, of Arkansas was photographed sitting with his boots on a desk in Pelosi's office during the Jan. 6 riot. He was ordered Friday to be brought to Washington, where he faces charges of unlawfully entering a restricted area with a lethal weapon — a stun gun. Barnett is also charged with disorderly conduct and theft of public property.

Retired Air Force Lt. Col. Larry Rendall Brock Jr., of Texas, is a former former fighter pilot photographed on the Senate floor wearing a military style helmet and body armor and carrying plastic zip-tie handcuffs. He is charged with knowingly entering or remaining in a restricted building and violent entry and disorderly conduct on Capitol grounds.

Jacob Chansley, 33 of Arizona was seen in the capitol wearing face paint, no shirt and a furry hat with horns and carrying a U.S. flag attached to a spear. Chansley, also known as Jake Angeli, calls himself the "QAnon Shaman," a reference to the apocalyptic and convoluted conspiracy theory spread largely through the internet and promoted by some right-wing extremists. He is charged with entering a restricted building without lawful authority, violent entry and disorderly conduct on Capitol grounds.

Lonnie Leroy Coffman, 70, of Alabama drove to Washington to attend Trump's "Save America Rally" in a red pickup packed with an M4 assault rifle, multiple loaded magazines, three handguns and 11 Mason jars filled with homemade napalm, according to court filings. The grandfather was arrested that evening when he returned to the truck carrying a 9mm Smith & Wesson handgun and a .22-caliber derringer pistol. He is charged with possession of an unregistered firearm and carrying a pistol without a license.

Jenny Cudd of Texas, a former mayoral candidate in Midland, was arrested after posting a video bragging that she was part of a group that broke down Pelosi's door. Cudd, who owns a flower shop, deleted the video and told The Associated Press she didn't personally go into Pelosi's office and didn't do anything violent or destroy any property. She was charged with entering a restricted building and disorderly conduct, both misdemeanors. She said she received death threats and her business, Becky's Flowers, was bombarded with one-star reviews calling her a traitor and domestic terrorist.

Derrick Evans, 35, was a West Virginia lawmaker who streamed video of himself charging into the building with the mob. The recently sworn-in delegate to the West Virginia House resigned after his arrest on two riot-related charges and apologized. Evans was quickly identified after he posted the video of the Capitol door being smashed and declaring: "The door is cracked! … We're in, we're in! Derrick Evans is in the Capitol!"

Tim Gionet, a far-right media personality who calls himself "Baked Alaska," entered various offices in the Capitol and cursed at a law officer he alleged had shoved him. When told by law enforcement officers to move, he identified himself as a member of the media. Gionet live-streamed for about a half hour from inside the building and could be heard encouraging other protesters not to leave, cussing and saying "I'm staying" and "1776 baby," prosecutors said. He was arrested in Houston and faces charges of violent and disorderly conduct on Capitol grounds and knowingly entering a restricted building without lawful authority.

Jack Jesse Griffith of Tennessee was arrested after an informant identified him as a person known on Facebook as Juan Bibiano. That account shows of Griffith in what appears to be the Capitol Crypt, raising his closed fist into the air. Another post included a message saying he helped "stormed (sic) the capitol today." He is charged with knowingly entering or remaining in any restricted building or grounds without lawful authority to do so. He's also accused of engaging in disorderly or disruptive conduct with intent to to impede or disrupt government business.

Emily Hernandez of Missouri was seen in photos holding a splintered name plate belonging to Pelosi. Hernandez is charged with five counts, including disorderly conduct that impedes the conduct of government business and the stealing or disposing of government property.

Doug Jensen, 41, of Iowa was seen on video chasing a Black officer up an interior flight of stairs in the Capitol as a mob trailed several steps behind. Jensen, who is white, was charged with trespassing and disorderly conduct.

Adam Johnson, 36, of Florida is accused of swiping Pelosi's lectern during the chaos and smiling as he walked through the Capitol rotunda with it. He is charged with theft, violent entry and disorderly conduct on Capitol grounds.

Nicholas R. Ochs, 34, of Hawaii, founder of a local Proud Boys chapter, posted a photo of himself on Twitter inside the Capitol grinning widely as he smoked a cigarette. The FBI said it identified him from photos taken when Ochs campaigned unsuccessfully last year as the Republican nominee for a seat in the Hawaii statehouse.

Robert Keith Packer, 56, of Virginia caused an uproar on social media after being seen in the Capitol wearing a sweatshirt bearing the name "Camp Auschwitz," a reference to the Nazi concentration camp where about 1.1 million people were killed during World War II. He was charged with violent entry and disorderly conduct on Capitol grounds, and unlawfully entering a restricted building.

Dominic Pezzola, 43, of New York is a former Marine identified as a Proud Boys member who was seen in video shattering an exterior Capitol window with a stolen Capitol Police riot shield before he and others climbed inside, the FBI said. The bearded man, whose nickname is "Spazzo," also appears in a second video taken inside the building that shows him puffing a cigar in what he calls a "victory smoke," according to a court filing. He is charged with destruction of government property, obstruction of an official proceeding and illegally entering a restricted building.

Jenna Ryan, 50, of Texas live-streamed a Facebook video walking with a group toward the Capitol and said, "We are going to (expletive) go in here" as they approached the door. "Life or death, it doesn't matter. Here we go." She then turned the camera to expose her face and said, "Y'all know who to hire for your Realtor, Jenna Ryan." She told KTVT-TV in Fort Worth she didn't do anything violent, didn't realize there was violence and hoped Trump would pardon her. "I just want people to know I'm a normal person, that I listen to my president who told me to go to the Capitol, that I was displaying my patriotism." She faces a charge of knowingly entering or remaining in the restricted building or grounds without lawful authority and disorderly conduct on Capitol grounds.

Robert Sanford, 55, a retired Pennsylvania firefighter, allegedly threw a fire extinguisher that hit three Capitol Police officers during the violent siege. He was charged with assault of a police officer, disorderly conduct on Capitol grounds, civil disorder and unlawfully entering the Capitol. His lawyer said he was a Trump supporter who got caught up in the mob mentality.

RELATED: TSA may add US Capitol rioters to no-fly list