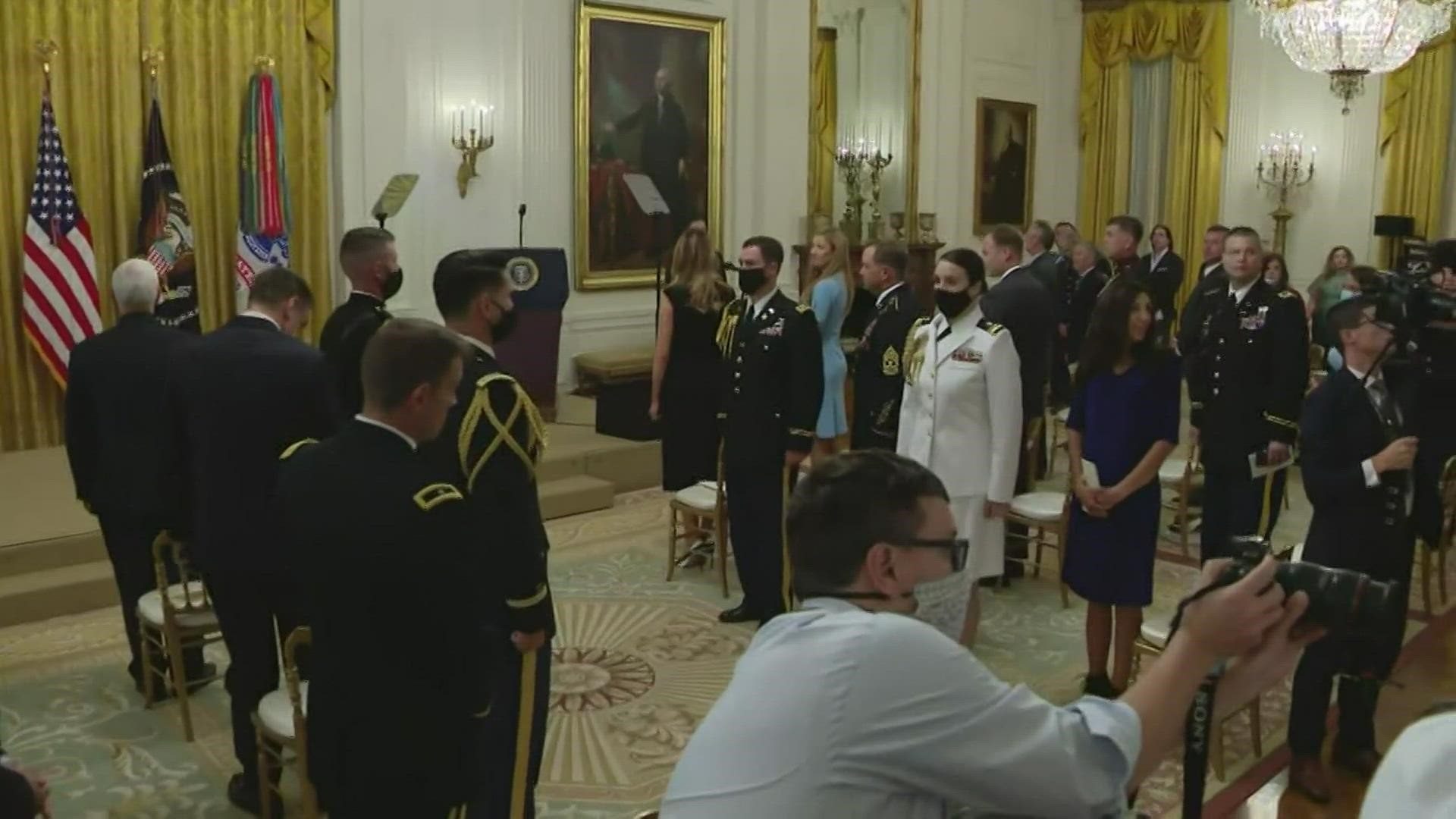 WASHINGTON, D.C., USA — A South Carolina solider has received the nation's highest military honor for his actions to save hostages being held by ISIS in Iraq.

Sgt. Maj. Payne grew up in Batesburg-Leesville and Lugoff, SC, what he characterizes as “small-town America.” His connection to his home state is a strong part of his personal identity.

The day he's received the award bears special significance to Payne: he decided to join the military after seeing the events of September 11, 2001 when he was in high school.

RELATED: 'I consider myself a guardian of this medal:' Midlands Native Receiving Medal of Honor on Friday

The medal will honor Payne's actions in a daring predawn raid on Oct. 22, 2015. Seeking to rescue 70 Islamic State hostages, American and Kurdish commandos flew in CH-47 Chinook helicopters to the town of Huwija, located roughly 15 kilometers (9 miles) west of the Iraqi city of Kirkuk.

Payne and his team faced a barrage of machine gunfire, militants exploding suicide vests and stifling smoke as they rescued hostages from a burning building. He was initially given the Army’s second-highest award, the Distinguished Service Cross, which was upgraded to a Medal of Honor.

South Carolina Governor Henry McMaster issued a statement earlier about Payne's honor and what it means to the state.

"Sergeant Payne embodies the spirit of military service that has been a part of our state from the beginning. His incredible act of bravery can be described as nothing less than heroic We are proud to call him one our own from South Carolina, and I want to thank President Trump for recognizing him with the Medal of Honor."

News19 was able to interview Payne about what transpired before the event. You can read more of his story on that fateful day below.

Sergeant Major Thomas "Patrick" Payne grew up in two towns in the Midlands, Batesburg-Leesville and Lugoff.

"When I was a senior in high school, that's when September 11th happened. That's when I decided to join the military," said Payne.

Back on October 22nd, 2015 while deployed overseas to Iraq, his crew got called to a mission to save more than 70 Iraqi hostages held by ISIS.

"Their Kurdish regional government in Iraq reached out to the United States for assistance for a hostage rescue. Based off of intelligence that we received, we assessed that hostages were being held at an ISIS prison compound," explained Payne.

"Anytime when our boots hit the ground, we're ambassadors of the American way of life. We load up on the helicopters... that's when the pilot passes back the one-minute call and that's when you make that transition from solider to warrior," said Payne. "That's when all joking stops and that's when it's game time."

When they landed, Sgt. Maj. Payne says they couldn't see anything with it being nighttime. Part of the compound the team was at was under an intense firefight.

They knew they still needed to continue the mission because it was their duty to bring those men home.

"We threw up the ladders and our partner force needed some strong inspiration, so that's when one of my teammates looked them right in the eyes, (and said), 'Follow me.'," explained Payne.

Once they arrived at their first building, the team was able to liberate 37 hostages.

When they moved over to the rooftop of the other building, they can hear gunfire and suicide vests being used below them, shaking the building.

As they maneuvered to the ground floor from the outside of the building, Payne discovered the same prison doors used in the other building is the same inside this one.

The building was on fire and the soldiers were still being engaged by the enemy as they continued to work to free the hostages.

There were locks on the prison door and they had several unsuccessful attempts but then Payne used bolt cutters to open it to get to the hostages so they could complete their mission.

"We maneuver into the building and Sgt. Maj. is pulling them out of the back room. I'm basically like a third base coach pointing to the breach because at that point, we had gotten a radio call for a mandatory evacuation because the building started to collapse."

While Payne knew they needed to evacuate the building, he knew they still had a mission to complete by saving all the hostages.

"Run back in and noticed kind of a large fellow, over 200 pounds, and basically had given up on life. I kind of grabbed him by the back of the collar, moved him, dragged him out of the breach and passed him off to a partner force," said Payne.

"We're there for our partners. They're there for us. It was our duty to bring those men home. When you think about it, we were able to liberate those hostages and we gave them a second chance at life and the pursuit of happiness," explained Payne.

At the end of the mission, Payne and his team were able to liberate more than 70 hostages. It's still one of the largest hostage rescues in Special Operations history.

On Friday, Sgt. Maj. Payne will be honored at The White House by President Donald Trump with the Medal of Honor after his heroic actions that October night.

"The legacies of my teammates will live on with this medal. The spirit of the Medal of Honor lives inside of every American."

Payne says he's excited to be at the nation's capital on Friday.

"We're looking forward to it. We're looking forward to going to the White House with my family and spend some time with the President. It will be a great opportunity for us," said Payne. "It's pretty special. My dad serves his community back home. He serves with the Richland County Sheriff's Department. He's one of the pilots... It's going to be kind of a cool moment to share that moment with him."