Forecasters said Nicholas could potentially stall over storm-battered Louisiana and bring life-threatening floods across the Deep South over the coming days. 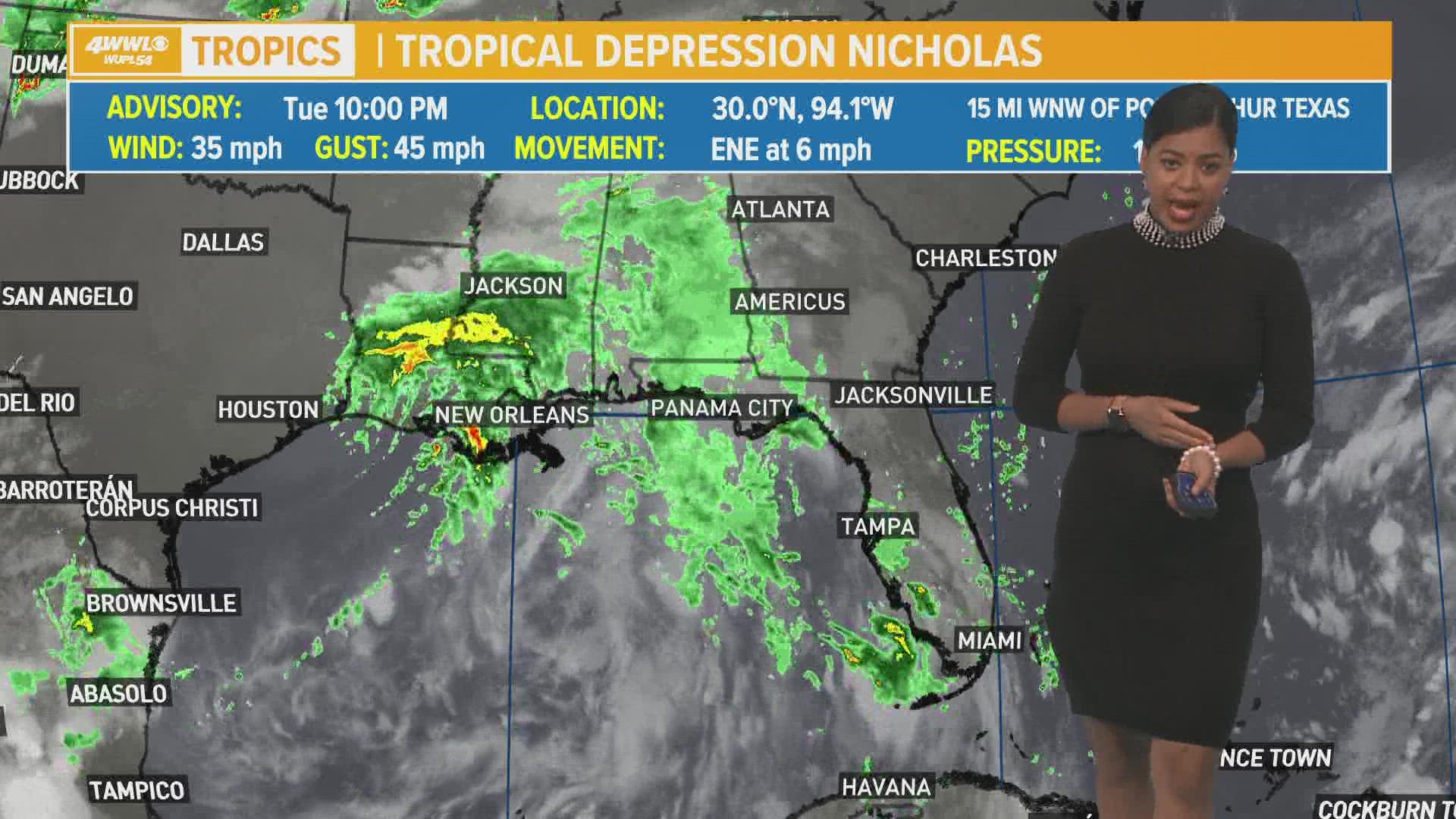 Flash flooding and tornadoes were possible near the Gulf Coast, the Mississippi Emergency Management Agency said. Flash flood watches also were posted in coastal Alabama and the Florida panhandle. In Louisiana, the rainfall complicated an already difficult recovery at homes ripped open by Ida on Aug. 29. Thousands remain without power in Texas and Louisiana.

“I'm not sure at this point what it looks like,” said Edith Anthony, whose home in LaPlace, a New Orleans suburb between Lake Pontchartrain and the Mississippi River, lost part of its roof while getting about 2 to 3 feet of flood water two weeks ago.

They still don't have electricity, and couldn't arrange for a tarp to cover the roof before Nicholas blew in. Now she and her husband are staying in a Mobile, Alabama, hotel, preparing to return this weekend to what's left of their home.

Nicholas dumped nearly 14 inches (35 centimeters) of rain in Galveston, Texas, after making landfall as a Category 1 hurricane, the 14th named storm of the 2021 Atlantic hurricane season. Houston reported more than 6 inches (15 centimeters). Forecasters warned people along the central Gulf Coast that up to 20 inches (50 centimeters) are possible through Friday.

In Louisiana, flash floods will be possible through Thursday morning, but the rain is forecast to linger for days.

“We're going to be in a wet weather pattern well into next week," said meteorologist Christopher Brannan at the National Weather Service. He said Nicholas, now a tropical depression, will likely stall over southwest Louisiana while it dissipates into a a remnant low pressure system.

The storm was forecast to dump as much as 6 inches (15 centimeters) of rain from southeast Louisiana into the Florida panhandle through Friday, with 10 inches (25 centimeters) possible in isolated areas.

Gov. John Bel Edwards warned people to take Nicholas seriously, even though it was no longer a hurricane.

“This is a very serious storm, particularly in those areas that were so heavily impacted by Hurricane Ida,” Edwards said Tuesday.

Ida peeled open the tin roof of Terry and Patti Dardar's home in the small Louisiana community of Pointe-aux-Chenes, and then Nicholas made things much worse, soaking the upstairs. They still don't have power or piped-in water, but the rain enabled their son Terren and their grandchildren to collect badly needed water in jugs. They poured it through a strainer into a huge plastic container and hauled it up to the house, where a pump powered by a generator brought the water inside.

Patti Dardar said the family is doing its best with what it has left.

“These are tough guys, and they relish all of this,” he said. The coop services about 21,000 customers across five parishes including parts of the hard-hit Terrebonne and Lafourche parishes. Ticheli said the coop has returned power to about 75% of its customers with the remaining 25% mostly in the hardest-hit parts of southern Terrebonne parish.

The rain seemed to blow past the weather-battered city of Lake Charles in southwest Louisiana — hit last year by hurricanes Laura and Delta — where city crews scoured the drainage system to keep it free from debris during Nicholas. Mayor Nic Hunter said he's been worried about how his people are coping.

“With what people have gone through over the last 16 months here in Lake Charles, they are very, understandably, despondent, emotional. Any time we have even a hint of a weather event approaching, people get scared,” he said.

Associated Press reporters Jay Reeves, in Pointe-aux-Chenes, Louisiana and Juan A. Lozano in Surfside Beach, Texas contributed to this report.