The reception of President Trump at the showdown between the Tigers and Crimson Tide contrasted the scene at his World Series appearance in Washington, D.C. 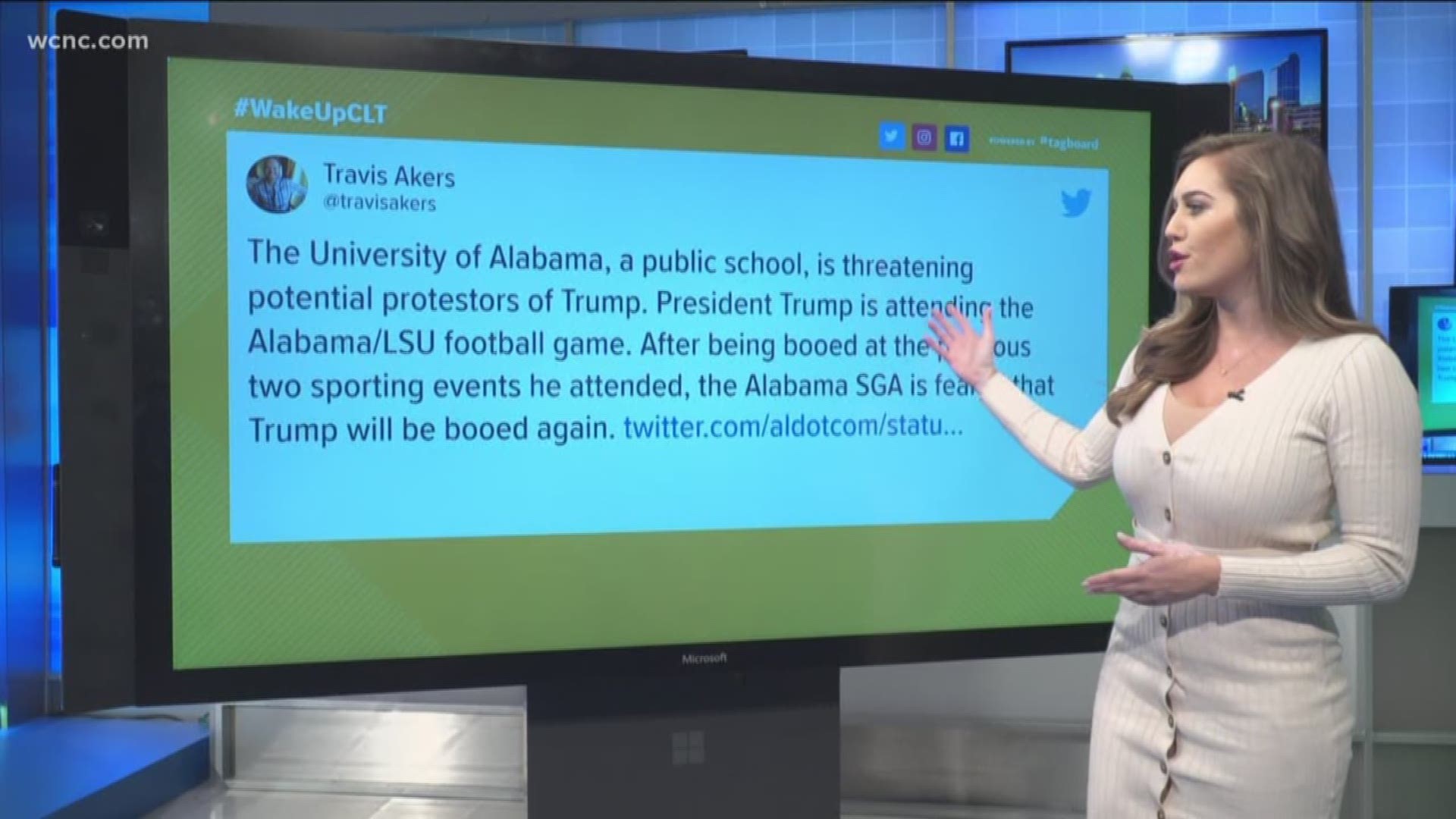 TUSCALOOSA, Ala. — President Donald Trump knew where to go Saturday for home field advantage, finding comfort in the Deep South with college football fans cheering the nation's top two teams — and him.

His reception at the showdown between Louisiana State and Alabama contrasted with the scene at Game 5 of the World Series in Washington, where was booed, and the mixed response to his appearance at a martial arts fight in New York.

Trump, sitting one tier above the field, waved as fans turned around to look up at the president. He smiled, gave a thumbs-up a few times and threw a couple of fist bumps into the air as the Alabama fans waved red and white pompoms in response. First lady Melania Trump got an equally enthusiastic welcome.

RELATED: Cheers, chants of 'lock him up' greet President Trump at World Series

There was little sign of political sentiment on campus but plenty of bipartisan grumbling about the long lines to get in due to enhanced security. Trump left in the fourth quarter.

The inflatable figure depicting a baby Donald Trump wearing a diaper, which has been seen at protests around the world, made an appearance in Tuscaloosa. The organizer of the group that "adopted" the balloon for the event told police a man with a knife cut an 8-foot-long gash in its back, deflating it. Tuscaloosa police did not immediately respond to a request for details.

RELATED: Trump's sports kick is about politics, but fans have a say

Credit: AP
A responding officer and an unidentified man stands by a Baby Trump balloon deflated by someone at Monnish Park as people were protesting President Donald Trump's visit to an NCAA college football game between Louisiana State and Alabama playing nearby in Tuscaloosa, Ala., Saturday, Nov. 9, 2019. The towering Baby Trump protest balloon was knifed and deflated by someone unhappy with its appearance during Trump's trip to Alabama, organizers said. (Stephanie Taylor/The Tuscaloosa News via AP)

A protester carried a sign that said "Roll Tide Impeach 45" and another held a sign saying she had sold her ticket and donated the money to the Alabama Democratic Party.

But there were more pro-Trump signs. One woman wore an oversized red MAGA hat and carried a sign saying: "Make BAMA #1 Again." There were flags emblazoned with "Trump 2020" and banners that read: "Keep America Great Trump 2020."

Presidents have long used sporting events to woo support, but these events also are a venue for fans to express their own political leanings.

Both loud boos and cheers could be heard as Trump took his seat before the recent pay-per-view UFC title match. That greeting was warmer than the reception Trump received at the World Series at Nationals Park, when he was roundly booed and became the target of a "Lock him up!" chant.

He knew he was heading to friendlier turf in Alabama, getting out of Washington where talk of impeachment was everywhere.

Credit: AP
President Donald Trump watches the first half of an NCAA football game between Alabama and LSU with his wife Melania. Saturday, Nov. 9, 2019, in Tuscaloosa, Alb. (AP Photo/John Bazemore)

On the flight to Tuscaloosa, Trump tweeted jabs at House Democrats, who launched the impeachment inquiry.

On the tarmac before boarding Air Force One, he told reporters: "It's a witch hunt and it should never happen to another president."

In Alabama, where he won 63% of the vote in 2016, the president generated some heat. Alabama's student government association warned students against being disruptive, but said their First Amendment rights will not being muzzled.

"Regardless of your political views, that's pretty cool, having the president at the game," said LSU quarterback Joe Burrow.

Alabama wide receiver Henry Ruggs III said, "Just for him even wanting to come to this game, it just shows, like I said, the magnitude of the game."

For Trump, the game is both football and politics.

Credit: AP
FILE - In this Oct. 26, 2019, file photo, LSU quarterback Joe Burrow (9) scrambles in the first half of an NCAA college football game against the Auburn, in Baton Rouge, La. For the first time in college football history, there will be two games matching teams of at least 8-0 on the same day, according to ESPN Facts and Info. In Tuscaloosa, Alabama, LSU and the Crimson Tide will play the first regular-season game matching AP Nos. 1 and 2 since 2011 _ when No. 1 LSU beat No. 2 Alabama 9-6 in overtime. (AP Photo/Gerald Herbert, File)

Trump has been enthusiastically supporting Republican businessman Eddie Rispone's effort to unseat Louisiana's incumbent Democratic Gov. John Bel Edwards in the last governor's race of the year. The runoff election in Louisiana offers Trump an opportunity to pick up a win in a rare Democratic-held governor's seat in the Deep South. He attended a rally in Monroe, Louisiana, on Wednesday and he'll be back in the state this coming week, two days before Louisiana voters have their say.

The game came two days after Trump's former attorney general, Jeff Sessions, announced he is going to run again for his old Senate seat from Alabama. Sessions was the first senator to back Trump's upstart campaign and worked to champion conservative causes as attorney general, but the president has never forgiven Sessions for withdrawing from overseeing the Russia investigation led by former special counsel Robert Mueller.

Trump follows a long line of presidents who have attended college football games:

—President John F. Kennedy went to the Alabama-Oklahoma game on New Year's Day in 1963 in Miami.

RELATED: Was Trump call with Ukraine 'perfect'? GOP has many answers