With the smell of California wildfires in the air, President Trump ignored the scientific consensus that climate change is playing a central role in the fires. 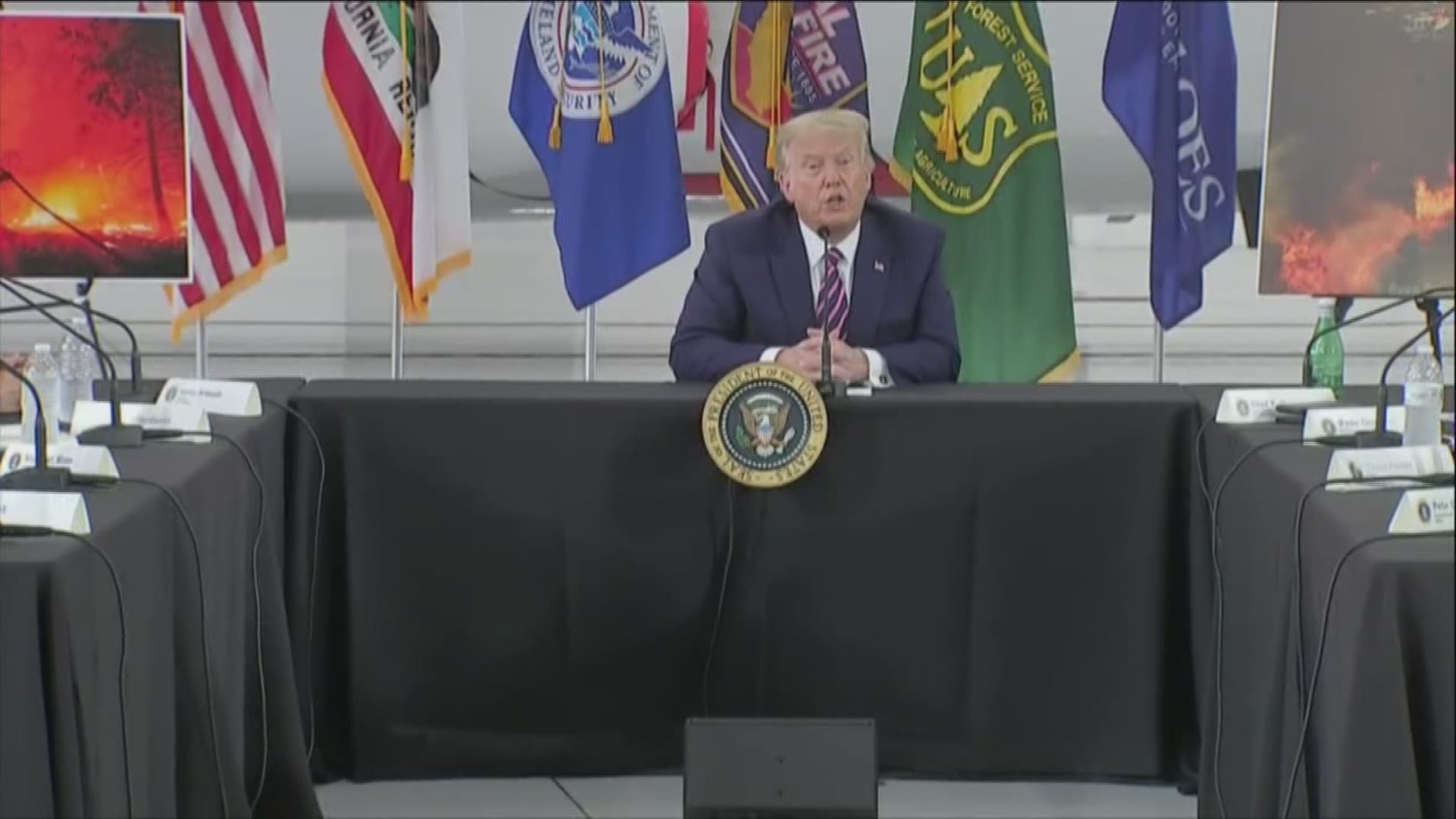 SACRAMENTO, Calif. — California Gov. Gavin Newsom was respectful with President Donald Trump about climate change during his visit to the state.

Trump traveled to California on Monday for a briefing about the massive wildfires that have burned throughout the state this year.

"If you look for other countries you go to other countries in Europe. You go to Austria, Finland and numerous countries. I talked to the heads. They’re forest nations. They're in forests and they don't have problems like this," Trump said.

Last week, Newsom used the fires to forcefully advocate for environmental policy, saying he has no patience for climate change deniers. But on Monday, Newsom took a much softer tone, telling Trump they could agree to disagree on climate change. He stressed that science shows it is real.

"We come from a perspective humbly where we submit the science is in and observed evidence is self-evident that climate change is real," Newsom said.

During a briefing on the wildfires currently engulfing the entire West Coast, Wade Crowfoot, secretary of the California Natural Resources Agency, told Trump that “if we ignore that science and sort of put our heads in the sand and think it’s all about vegetation management, we’re not going to succeed together in protecting California.”

Crowfoot said, “I wish science agreed with you.”

Trump got in the last word of the exchange: “Well, I don’t think science knows actually.”

WATCH: 'It will start getting cooler' | President Trump responds to combating climate change in fires

President Donald Trump concluded his visit to Sacramento with a ceremony honoring seven members of the California National Guard.

The seven California National Guardsmen had completed a daring rescue via Black Hawk and Chinook helicopters of over 200 people and pets who were trapped near Mammoth Falls as the Creek Fire blazed through Eldorado National Forest.

The mission was dangerous due to high winds and poor visibility from smoke, but the guardsmen pushed ahead successfully. The very next day, the group was out again, helping 50 more people escape the deadly flames.

“We are proud of them," President Trump said. "That’s an incredible story.”

The president called the seven men "unyielding" in the face of dangerous wildfire conditions.

Even as the guardsmen were being honored inside, Trump supporters and protestors gathered outside McClellan Air Force base.

President Donald Trump touched down around 10:50 a.m. and answered a few questions from reporters.

The president said the deadly wildfires are caused by “forest mismanagement and other things.” When asked if climate change was among the other things, he said, “it’s possible, many things are possibly.”

Still, President Trump seemed skeptical still of climate change as a factor in the fires.

During a briefing on the wildfires currently engulfing the entire West Coast, Wade Crowfoot, secretary of the California Natural Resources Agency, told Trump that “if we ignore that science and sort of put our heads in the sand and think it’s all about vegetation management, we’re not going to succeed together in protecting California.”

Crowfoot said, “I wish science agreed with you.”

Trump got in the last word of the exchange: “Well, I don’t think science knows actually.”

Thanking firefighters and first responders in his remarks, President Trump mentioned quick action between between the federal government and local and state agencies. He highlighted his partnership with Governor Gavin Newsom, and touched on his major disaster declaration in August and fire assistance management in several states.

Also during the briefing, Governor Newsom acknowledged that forest management in the state is lacking. Forest management is one of President Trump's main concerns with the recent wildfires.

However, Gov. Newsom also narrowed in on the fact that only 3% of forest lands belong to the state, while 50 percent are federal lands. Newsom said they were "fully committed" to working with the Trump Administration to make sure forest management in those lands was a priority.

The governor wrapped up his brief statement to the president by saying that climate change is a factor in this fires, pointing to the heatwaves, dry lightning strikes, and recent droughts as evidence.

President Donald Trump is stopping in Sacramento in between campaign events to get briefed on the wildfires consuming the state.

Trump will visit with local and federal fire and emergency officials, then participate in a ceremony recognizing the California National Guard.

The event will take place around 11 a.m. at McClellan Park. 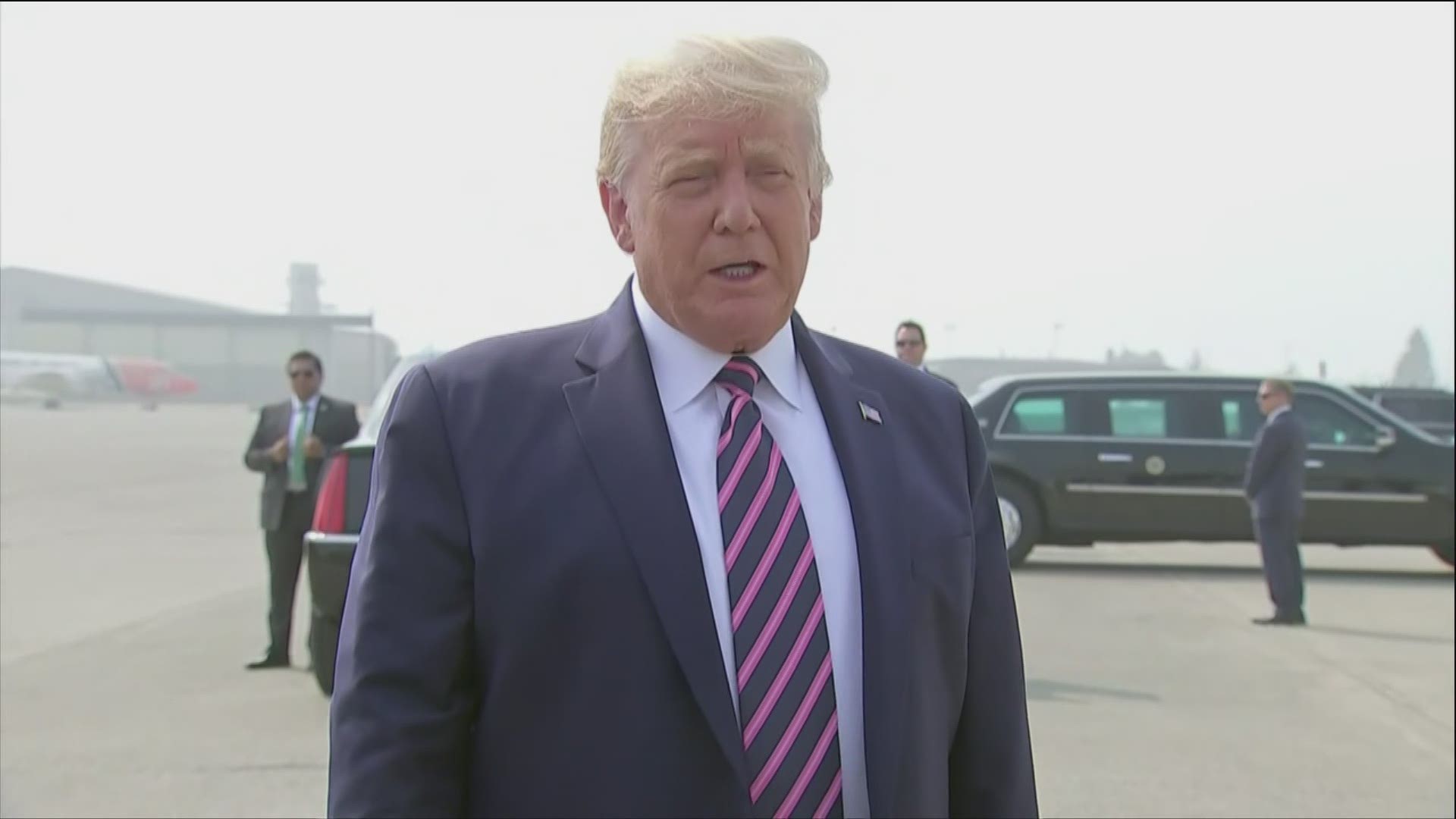 The Sacramento stop comes after several campaign events in Nevada over the weekend. But his rally in a Nevada warehouse was in open defiance of state regulations and his own administration’s pandemic health guidelines. Trump on Sunday hosted his first indoor rally since June, telling a packed, nearly mask-less crowd that the nation was “making the last turn” in defeating the virus. Not since a rally in Tulsa, Oklahoma, that was blamed for a surge of coronavirus infections has he gathered supporters indoors.

Following his visit in Sacramento, the President is traveling to Phoenix for a campaign event.

Trump last visited California with a focus on wildfires two years ago when he toured Paradise with then Governor Jerry Brown and Lt. Gov. Gavin Newsom.

Ahead of Trump's visit Monday to California for a fire briefing, the governors of California, Oregon and Washington state have said the fires are a consequence of climate change. Trump has blamed poor forest management for the flames that have killed at least 35 people, destroyed neighborhoods and enveloped the West Coast in smoke. Numerous studies in recent years have linked bigger wildfires in the U.S. to global warming from the burning of coal, oil and gas.