EXPLAINER: What remains as US ends Afghan 'forever war'

The U.S. is leaving a country that is torn by conflict and, if negotiations fail, could plunge into even more brutal civil war. 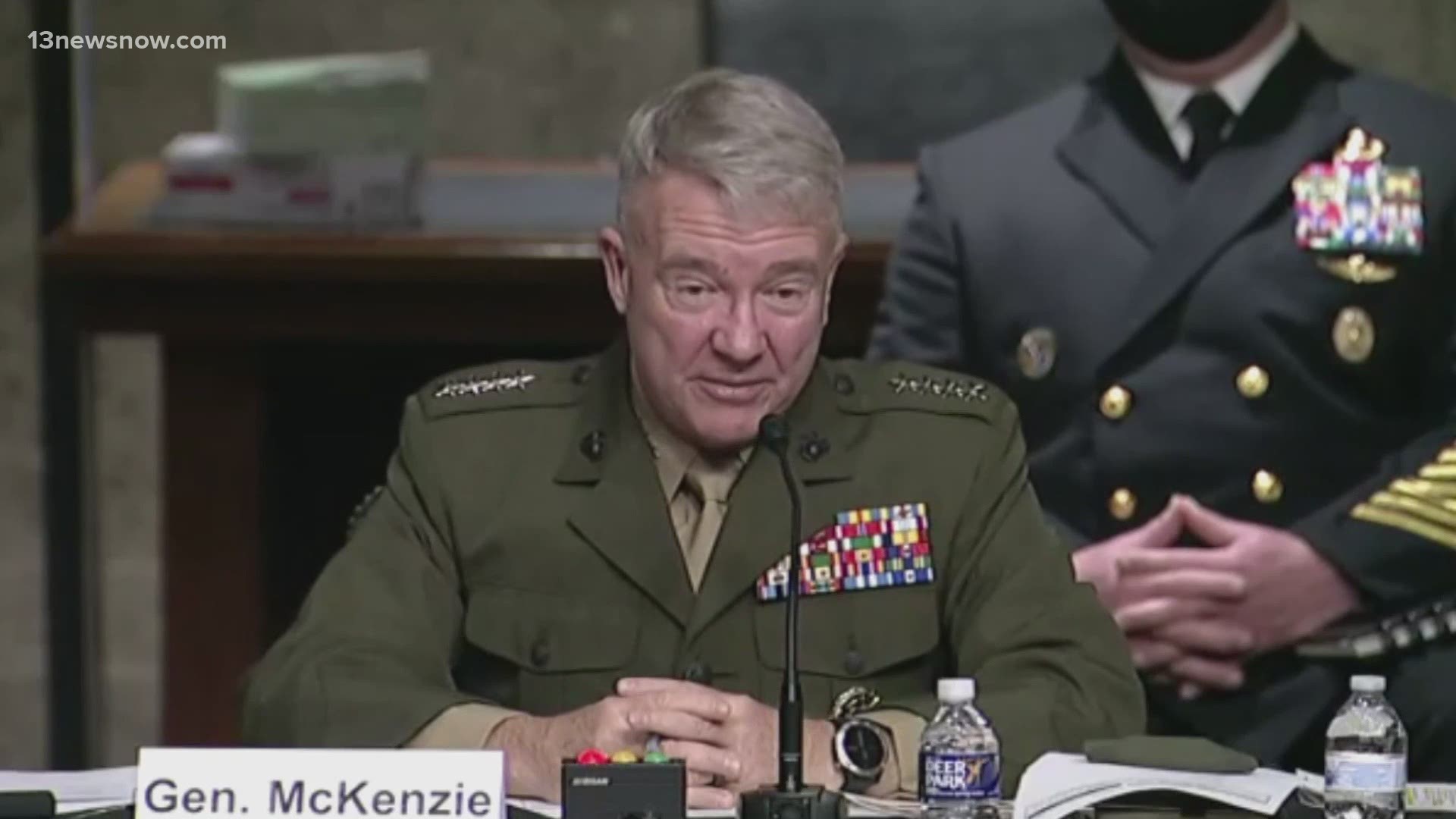 KABUL, Afghanistan — After 20 years, America is ending its “forever war” in Afghanistan.

Announcing a firm withdrawal deadline, President Joe Biden cut through the long debate, even within the U.S. military, over whether the time was right. Starting Saturday, the last remaining 2,500 to 3,500 American troops will begin leaving, to be fully out by Sept. 11 at the latest.

Another debate will likely go on far longer: Was it worth it?

Since 2001, tens of thousands of Afghans and 2,442 American soldiers have been killed, millions of Afghans driven from their homes, and billions of dollars spent on war and reconstruction. As the departure begins, The Associated Press takes a look at the mission and what it accomplished.

In the early days after the Sept. 11, 2001 terror attacks in the U.S., the mission seemed clear: Hunt down and punish the perpetrators.

The U.S. determined that al-Qaida and its leader, Osama bin Laden, had plotted the attack from the safety of Afghanistan, protected by its radical Taliban rulers. At the time the Taliban were a pariah government, under U.N. sanctions and vilified in the West for their rule by a harsh interpretation of Islamic law.

Until 9/11, the U.S. had watched Afghanistan from a distance, occasionally requesting the Taliban to hand over bin Laden and once in 1998 firing a couple of cruise missiles at an al-Qaida base in eastern Afghanistan.

Now America was leading an invasion, dubbed Operation Enduring Freedom, with the mission of removing the Taliban and destroying al-Qaida.

Washington turned to the only allies in Afghanistan it could — a collection of warlords, most of whom were former mujahedeen backed by the U.S. in the 1980s in the fight against the invading Soviet Union. Rallying around the U.S. after 9/11, NATO joined the coalition.

Within weeks of the invasion and aerial bombardment, the U.S.-led coalition had pounded the Taliban into submission and driven them from power. Its leadership fled, its fighters lost control of the entire nation. Al-Qaida as well fled underground, crossing into neighboring Pakistan.

The hunt for bin Laden took 10 years. Finally, he was tracked to his hideout in Pakistan, barely 100 kilometers (60 miles) from Islamabad. A U.S. Navy Seals team went in under cover of darkness and killed him.

But in the interceding decade, America and NATO had been dragged into a dramatically expanded mission. Then-Defense Secretary Donald Rumsfeld at first said America was not in Afghanistan to nation-build. That would change.

When the U.S. invaded Iraq in 2003, it took its eye off Afghanistan. It left it to the former warlords, pre-occupied with wealth and power. The first post-Taliban president, Hamid Karzai, raised the idea of talks with the Taliban to work out a peace, and the crushed militants put out signals they wanted to reach an accommodation.

But American officials blocked any negotiations with the Taliban, convinced the insurgents could be militarily destroyed.

Instead, the militants re-emerged in a long insurgency, and the U.S. found itself pouring in money and manpower to help the Afghan government fight and to rebuild the war-shattered nation. With the flood of billions of dollars, corruption only grew in the U.S.-backed government, only growing worse as the years went on.

Meanwhile, al-Qaida’s ability to strike the U.S. and the West has been severely damaged. But the group has spread in branches in multiple countries fighting in insurgencies.

Biden explained his decision to pull out the last 2,500-3,500 American soldiers from Afghanistan, saying America’s security concerns had evolved.

“Bin Laden is dead, and al-Qaida is degraded in Iraq and Afghanistan," he said, arguing that the terror threat has “metastasized” into a global phenomenon, not to be fought with thousands of troops on the ground in one country but with new technology. The U.S., he said, must be freed to fight the 21st century’s more sophisticated challenges, including competition from Russia and China.

For the situation in Afghanistan, he said he didn’t see how continued American military presence would bring a turnaround. “When will it be the right moment to leave? One more year, two more years, ten more years?” he said.

WHAT NOW FOR AFGHANISTAN?

The U.S. and NATO leave behind an Afghanistan that is at least half run directly or indirectly by the Taliban — despite billions poured into training and arming Afghan forces to fight them. Riddled with corruption and tied to regional warlords, the U.S.-backed government is widely distrusted by many Afghans.

Washington and its international allies are putting heavy pressure on the government and the Taliban to reach a peace deal. The hope is that both sides realize military victory is impossible and that peace together is the only way forward.

The best case scenario is some sort of government including the Taliban that can pave the way for a drawing up a new constitutional system for the future, including some form of elections.

The very possible worst case scenario is that peace talks fail, and Afghanistan is plunged into a new chapter of its decades of civil war. That new phase could be more brutal than ever, with not only the Taliban but the country’s other, multiple warlords and armed factions battling it out for power.

The past 20 years since the Taliban were ousted have unquestionably seen gains for the Afghans. But they are fragile and risk being wiped away as the Americans step away — whether frittered away under a new government or crushed by continued war.

Girls are allowed an education, which had been banned under the Taliban. Still, at least 3.6 million children, the majority of them girls, are not in school, according to UNICEF.

Women are working and are in Parliament. Their voices are strong yet still Afghanistan’s Parliament has been unable to pass The Violence Against Women bill because religious conservatives dominate. The Georgetown Institute for Women, Peace and Security has consistently ranked Afghanistan as one of the worst countries in the world to be a woman.

Before the war in 2001, the Taliban had eradicated opium production in Afghanistan, according to United Nations figures. Today, it produces more opium than every other opium-producing country combined, despite the U.S. spending millions to eradicate drug production.

The opium industry in 2019, the latest available figures show, earned between $1.2 billion and $2.1 billion, outstripping the value of the country’s legal exports, according to John Sopko, the U.S. government’s watchdog on Afghan reconstruction. More than $14 million of that went into the coffers of the Taliban, who tax drug movement throughout the country.

Despite billions in U.S. humanitarian and reconstruction aid, more than half the population of 36 million lives under the World Bank-set poverty line of $1.90 a day — and millions more live not much above that level. Unemployment is at 40%. The U.N. and Red Cross say nearly half of all Afghan children face the danger of hunger.

The majority of Afghans hold out little hope for their future according to a 2018 Gallup poll.

“Afghanistan is bordering a failed state status and is sure to enter the category immediately after the withdrawal of the foreign forces absent a better political arrangement,” said Torek Farhadi, a political analyst and former government adviser. “That is the reality of Afghanistan.”