The DOT says the proposal would lower the chances passengers wishing to fly with their pets will be able to falsely claim them as service animals. 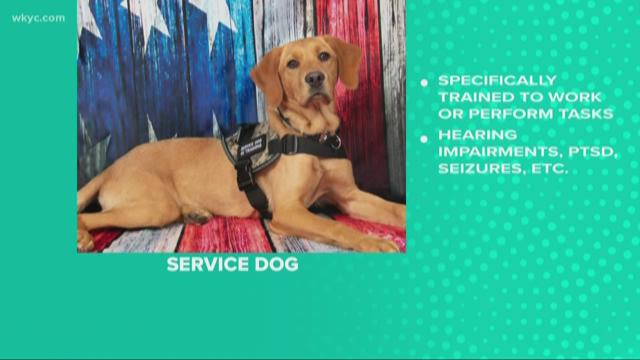 WASHINGTON — The U.S. Department of Transportation said Wednesday that it is considering new rules to limit what animals could fly on commercial flights as service animals and emotional support animals.

The proposed amendments would define service animals as only dogs that are specially trained for that purpose. It would also no longer give emotional support animals the same flying privileges as service animals.

Airlines would also be allowed to require a service animal to fit within its handler’s foot space on the plane.

According to the DOT announcement, the proposed rules change would allow airlines to "recognize emotional support animals as pets rather than service animals."

The proposed rules change comes after passengers had previously tried to claim they should be allowed to bring all sorts of unconventional animals, including peacocks, iguanas and ducks, on flights as emotional support animals.

Psychiatric service animals would be considered to be service animals, but they would have to be individually trained to perform tasks to benefit someone with a disability, the proposal explains.

Airlines would not be allowed to refuse to allow service animals on flights "solely on the basis of breed," the agency says.

In a statement from the Department of Transportation, the proposed amendments would also limit passengers with a disability to two service animals and require passengers to provide forms showing the animals are in good health and have the ability to not relieve themselves on long flights, or at least be able to relive themselves in a sanitary manner.

In the notice for the proposed new rules, the DOT says the proposed changes would "ensure that our air transportation system is safe for the traveling public and accessible to individuals with disabilities," while reducing the chances "that passengers wishing to travel with their pets on aircraft will be able to falsely claim their pets are service animals."

RELATED: VERIFY: Do service animals have to wear a marked vest?

The new rules that the DOT are asking the public to comment on would allow airlines to take the lead on requiring that service animals fit within the handler's foot space on flights and be leashed and tethered.

The public has 60 days to comment on the proposed rules. To find more on the proposed amendments go to https://www.regulations.gov/ where you'll also find contact information on how to submit your comments.

Read the full Notice of Proposed Rulemaking (NPRM) on Traveling by Air with Service Animals from the Department of Transportation here.