Her arm was almost broken. Chemicals were thrown at her. This is Captain Carneysha Mendoza's Capitol riots story

Carneysha Mendoza has served the US Capitol Police for 19 years. During a Feb. 23 Senate testimony, she described the Jan 6. attack as "the worst of the worst." 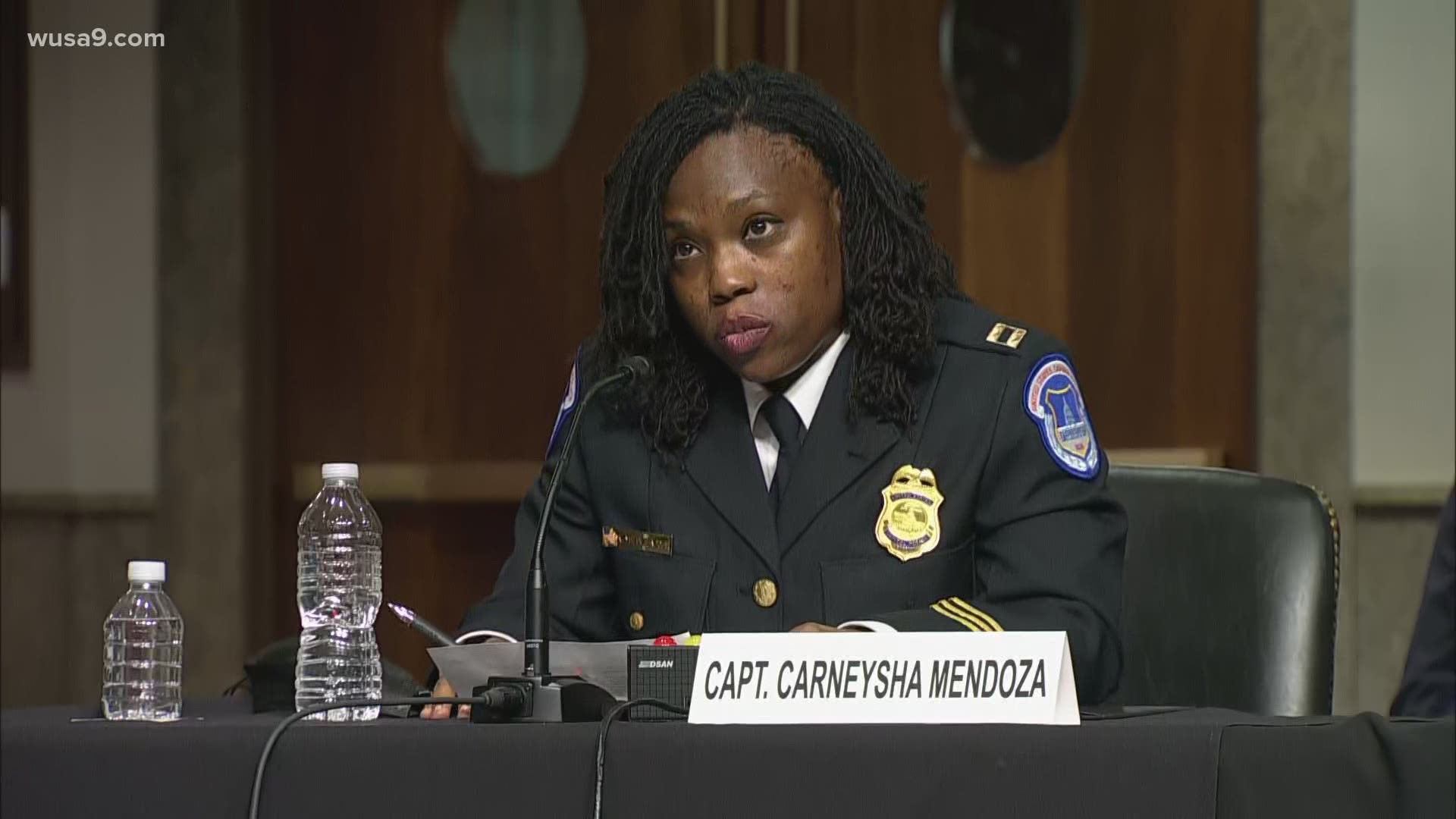 That's how long Captain Carneysha Mendoza has worked with the US Capitol Police. On January 6, the day pro-Trump rioters stormed the Capitol was “by far the worst of the worst” of all the days she has worked, she said.

Mendoza was one of many U.S. Capitol Police officers who experienced first-hand the traumatic impact of the January 6 attack on the Capitol, recounting the details in an emotional Senate testimony on Tuesday.

“I've worked in my nearly 19-year career in the department. This was by far the worst of the worst. We could have had 10 times the amount of people working with us and I still believe the battle would have been just as devastating."

Mendoza said her face was burned by chemicals used by the rioters and her arm was almost broken after being pinned between crowds.

RELATED: Rioters at U.S. Capitol 'came prepared for war' | MPD and US Capitol officials testify about lack of equipment and training

The agency has trained for numerous other demonstrations throughout her tenure, Mendoza said, sharing that the Capitol riots left her waking up the next morning "unable to move due to the pain" from breaking up protests that had gone violent.

Mendoza said Tuesday that on January 6, her agency was anticipating a similar turnout to that from the Nov. 14 MAGA March. She was prepping to work a 16-hour shift that reported in at 3 p.m. that day, but was eating with her 10-year-old son around 1:30 p.m. when she got the call that "things were really bad."

"I literally dropped everything to respond to work that day early and arrived within 15 minutes," she shared. "I contacted dispatch to ask her what active scenes we had and I was advised things were pretty bad. I asked what assistance was needed and was advised of six active scenes."

Mendoza said she was supposed to report to the DNC, but while driving in heard calls for immediate assistance at the Capitol, and so she proceeded there instead.

She made her way to one of the few doors she could access that wasn't blocked by crowds, aided by a fellow Capitol division officer. It was there she says she was met by 200 rioters. Turning around to escape the large crowd seconds later, Mendoza said her entry into the complex was already blocked by the rioters. She said she had no choice but to get further into the Capitol by going through the crowd.

Mendoza said she yelled and pushed people out of her way, finally making her way to Capitol police officers in riot gear in the hallway. She quickly jumped in line to help keep the rioters from getting further into the building.

It was during this scuffle that her arm got stuck.

"At some point, my right arm got wedged between rioters and the railing along the wall. A CPU Sergeant pulled my right arm free and had he not I'm certain it would have been broken," Mendoza said.

Mendoza said later she was exposed to a large amount of gas that had gotten into the building and just lingered there.

"I proceeded to the Rotunda where I noticed a heavy smoke-like residue and smelled what I believe to be military grade CS guess a familiar smell. It was mixed with fire extinguisher spray deployed by rioters."

"The rioters continued to deploy CS into the rotunda. Officers received a lot of gas exposure, which is worse inside the building than outside because there's nowhere for it to go. I received chemical burns to my face that still have not healed to this day," Mendoza said.

Prior to her time with the Capitol Police, Mendoza was an active-duty soldier with the U.S. Army whose last station worked with both the Pentagon and DC criminal investigations divisions, including recovery efforts during the Pentagon attack on 9/11.

Mendoza said in Tuesday's testimony that it was her Pentagon experience that helped shape her response efforts, keeping in mind "that something as serious as 9/11 could happen at any moment."

"There are certain lessons that always stuck with me after 9/11," she said on Tuesday. "One of those lessons is knowing the unthinkable is always possible, so be ready."

Here is a full transcript of her account and response to the Capitol riots:

I (was planning to) respond to the DNC since that building was closest to where I was at the time. En route I heard officers at the Capitol Building calling for immediate assistance so I proceeded past the DNC to the Capitol. As I arrived to the east front Plaza of the Capitol, I heard an officer yell there was a breach at the rotunda door and I heard various officers calling for assistance at multiple locations throughout the building.

Many of the doors to the building were not accessible due to the size of the crowd. I was able to enter a lower level door with the assistance of a Capitol division officer. Once inside the memorial door, I immediately noticed a large crowd of possibly 200 rioters yelling in front of me.

Since I was alone, I turned to go back so I could enter another door. But within the few seconds it took me to walk back to the door I entered, there were already countless rioters outside the building banging on the door. I had no choice but to proceed through the violent crowd in the building. I made my way through the crowd by yelling and pushing people out of my way until I saw Capitol Police civil disturbance units in riot gear in the hallway. They were holding the hallway to keep rioters from penetrating deeper into the building. I immediately jumped in line with them to assist with holding the crowd of riders. At some point, my right arm got wedged between rioters and the railing along the wall. A CPU Sergeant pulled my right arm free and had he not I'm certain it would have been broken.

Shortly after that, an officer was pushed and fell to the floor. I assisted the officer to a safer location and got back in line. At some point, the crowd breached the line officers worked so hard to maintain. Civil disturbance units began to redeploy to keep rioters from accessing other areas of the building. I proceeded to the Rotunda where I noticed a heavy smoke-like residue and smelled what I believe to be military grade CS guess a familiar smell. It was mixed with fire extinguisher spray deployed by rioters.

The rioters continued to deploy CS into the rotunda. Officers received a lot of gas exposure, which is worse inside the building than outside because there's nowhere for it to go. I received chemical burns to my face that still have not healed to this day. I witnessed officers being knocked to the ground and hit with various objects that were thrown by rioters. I was unable to determine exactly what those objects were. I immediately assumed command in the Rotunda and called for additional assets. Officers began to push the crowd out the door.

After a couple hours, officers cleared the Rotunda but had to physically hold the door closed because it had been broken by the rioters. Officers begged me for relief as they were unsure how long they could physically hold the door closed, with the crowd continually banging on the outside of the door attempting to gain reentry. Eventually, officers were able to secure the door with furniture and other objects. I'm proud of the officers I worked with on January 6, they fought extremely hard. I know some said the battle lasted three hours but according to my Fitbit, I was in the exercise zone for four hours and nine minutes. And many officers were in the fight even before I arrived. I'm extremely proud of the United States Capitol Police. I'm especially proud of the officers who are the backbone of this agency and carry out day-to-day operations.

I know that with teamwork we can move forward. The night of January 7, into the very early morning hours of my birthday January 8, I spent at the hospital, comforting the family of our fallen officer and met with the medical examiner's office prior to working with fellow officers to facilitate a motorcade to transport officer segment from the hospital. Of the multitude of events I've worked in my nearly 19 year career in the department. This was by far the worst of the worst. We could have had 10 times the amount of people working with us and I still believe the battle would have been just as devastating. As an American and as an army veteran, it's sad to see an attack by our fellow citizens. I'm sad to see the unnecessary loss of life. I'm sad to see the impact this has had on Capitol Police officers. And I'm sad to see the impact this has had on our agency and on our country. Although things are still wrong, and moving forward will be a difficult process. I look forward to moving forward together as an agency and as a country.

And in closing, I want to honor chief Sund on his leadership. I served under his command as a watch commander for three years and was able to personally see his hard work and dedication. He was fully dedicated to the United States Capitol Police and he cared about every employee on the department. I often hear employees on the department praised his leadership and his ability to inspire others he's made a significant impact on our agency. Thank you, Chief.

RELATED: VERIFY: Everything you need to know about the Capitol riot hearings this week

WUSA9 is also providing updates about the arrests, as well as charges and investigations stemming from the assault on the Capitol, in the daily Capitol Breach Newsletter. Sign up for it here.