The star athlete suffered a serious injury in 2016, and discovered the emotional wounds cut deeper than the physical ones. 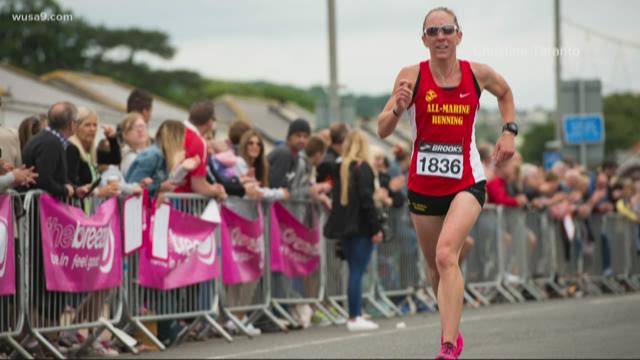 “I had been Marine Corps Athlete of the Year two times in 2013 and 2015, and I became that Marine Corps runner, like that was my identity and how people really saw me as," said Taranto.

She thought she was tough enough to handle anything.

Then, she suffered an injury in 2016, and her plans came to a crashing halt.

“Ran a race that January and three weeks later broke my foot," said Taranto. "The broken foot healed and all the sudden I had pain in my hip, and that pain went on for 8 months, and it was finally diagnosed that I needed my hip reconstructed.”

Unable to even walk up the stairs, she plummeted into depression.

Then, she googled "depression for injured athletes" and came across Injured Athletes Toolbox, run by Heidi Armstrong.

Desperate for help, she reached out to her.

While she healed from her hip surgery, her new coach helped with her emotional wounds.

“There’s a lot out there where you see the physical pain that goes into sports, but nobody talks about the emotional pain, which sometimes is worse than the injury itself… so saying that I need help, that was something that was difficult to do," she said.

Taranto said asking for help was the best decision she could have made.

She has a new attitude about her life and running. And, she's been inspired to start her own training business focused on making sure anyone whose sport is their therapy doesn't let it become their identity.

“And I now love running because it supplements my life, but it’s not everything in my life," said Taranto.

RELATED: Meet the man who ran 90 miles around the Beltway in Saturday's heat