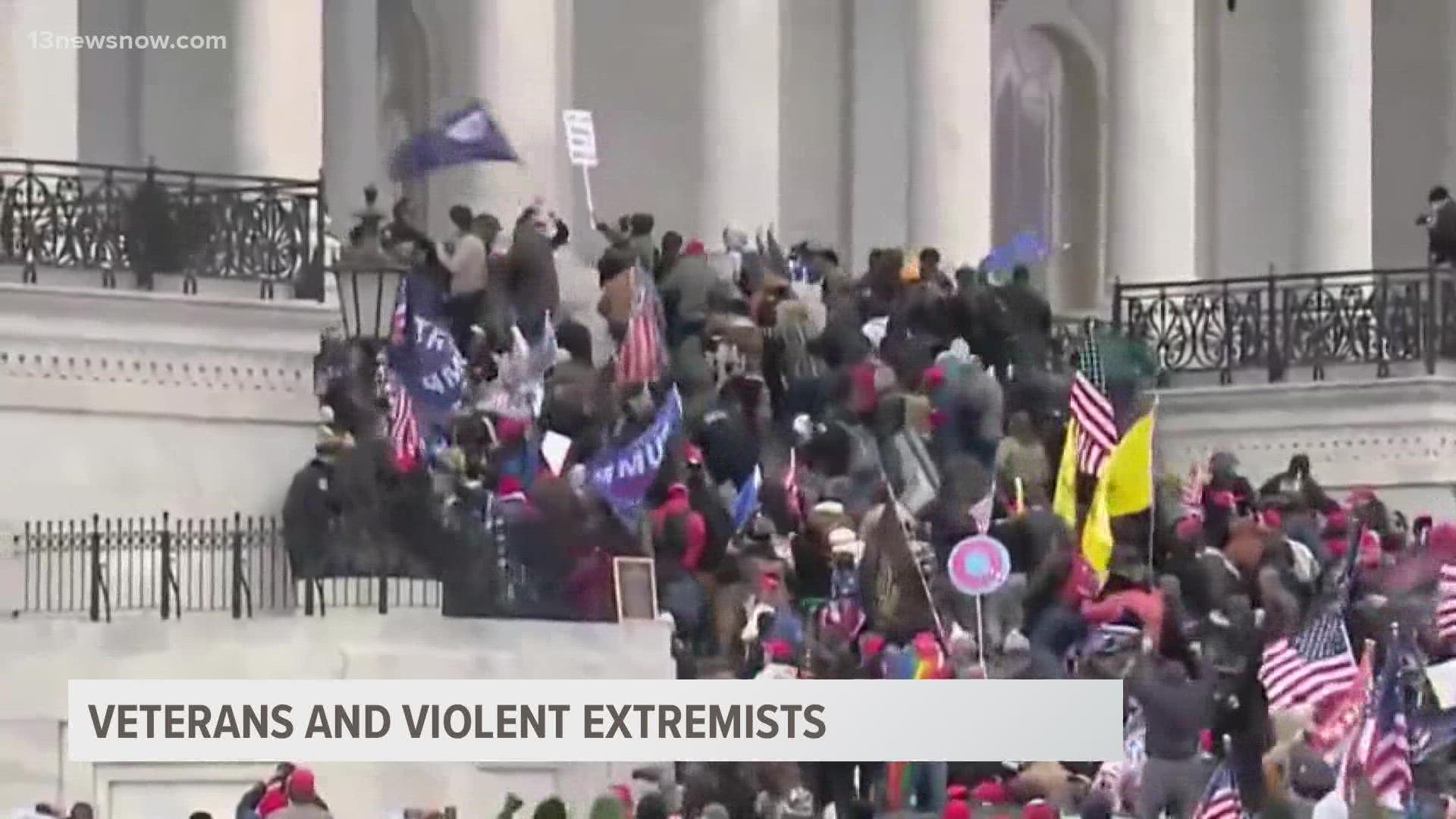 WASHINGTON — The recruitment of active duty military and veterans into far-right extremist groups was discussed Wednesday on Capitol Hill.

Groups like the Proud Boys, the Oath Keepers, and the Three Percenters are considered dangerous and potentially violent.

On Tuesday, experts testified before a House Committee about blatant attempts by such groups to pull current and former service members into their ranks.

The  "Domestic Violent Extremist Groups and the Recruitment of Veterans" hearing came amid a widespread government review of domestic extremism following the January 6  attack at the U.S. Capitol, which resulted in the arrests and prosecutions of more than 600 rioters --five of the suspects were active duty or reserve and 66 were veterans.

"They specifically target the isolated, the impoverished veterans who are frustrated and confused, those who are struggling to adapt to the civilian world," said Joe Plenzler, retired Marine Corps Lieutenant Colonel. "They provide them with a tribe, a simplistic view of the world and its problems, actionable solutions, and a sense of purpose. And then, they feed these vulnerable individuals a concoction of lies and an unrelenting narrative of political and social grievance."

Cynthia Miller-Idriss of American University added: "The clearest and most pressing danger from domestic violence extremism in the U.S. come from white supremacist extremists and anti-government extremism movements and groups."

But some committee Republicans pushed back, complaining that there was no focus in the hearing on left-wing extremist groups and that the witnesses did not address 2020's social justice protests following the police killing of George Floyd.

"Those were devastating riots in several major American cities last year," said Rep. Mike Bost  (R-Illinois). "Those riots did incredible damage to the people and property and led to calls to defund the police and to rising crime across the country."

Rep. Jim Banks (R-Indiana) accused panel Democrats of insulting the intelligence of veterans by holding a hearing on the factors that drive some of them toward violent extremism.

"This hearing is offensive and that fact that you're going to save our veterans from becoming political terrorists is offensive to every veteran in America," he said.