The aircraft carrier USS Dwight D. Eisenhower will be the first ship to return to Naval Station Norfolk on Saturday. The remaining ships return Sunday and Monday. 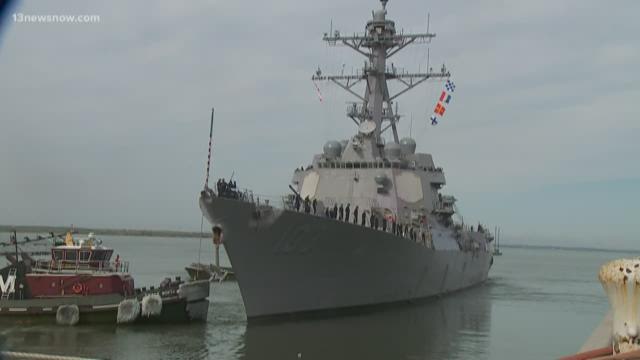 NORFOLK, Va. — Nearly 30 ships and 120 aircraft from Hampton Roads are expected to return to Hampton Roads in the next few days, the U.S. Navy said.

The aircraft and ships departed from Naval Station Norfolk and Joint Expeditionary Base Little Creek on Wednesday ahead of Hurricane Dorian's expected arrival.

“This port is critical to commerce in the Commonwealth and throughout the U.S., but it is even more important for our national security as home of the world’s largest naval base.”

The Navy said the decision to allow ships to return to their homeport follows thorough inspections of piers and airfields prior to opening for operations.

The aircraft carrier USS Dwight D. Eisenhower (CVN 69) will be the first ship returning to Naval Station Norfolk on Saturday around 6:30 p.m.

The remaining ships will return home Sunday and Monday.