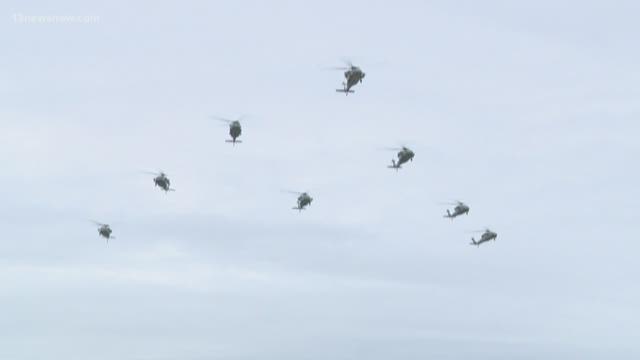 The final piece of the Navy's Abraham Lincoln Carrier Strike Group is finally back home in Hampton Roads.

Typically in the Navy, you could count on deployments to last for six or seven months. For the "Nightdippers" of Helicopter Sea Combat Squadron 5, this one was all that and then some: 10 months. That's 298 days to be exact.

And this was the best day of all. The day they came home at long last.

"I can't even explain it," said HSC-r Senior Chief Garvin Francis. "It was more than awesome."

The squadron was assigned to the USS Abraham Lincoln's air wing and strike group.

They left Norfolk back in March, went to the Middle East, and then kept going east--circumnavigating the globe, as the carrier went to its new homeport of San Diego.

"We got the job done," said HSC-5's commanding officer, CDR. Matthew Wright. "Our motto is 'Rescue, protect, deliver.' To rescue aviators at sea and mariners at sea, and protect the strike group with an inner zone defense. And then we also do logistics. We have a job to do and I'm proud of all of the members of the Nightdipper squadron. And we did it proudly."

The squadron's executive officer, CDR. Chandra Newman was greeted by her dog, Winston. She said the deployment was long but rewarding.

"You're out there, you're doing a job, you're staying busy," Newman said. "We've got a great squadron, great wardroom, great air wing. The Abraham Lincoln, they were fantastic to work with. As far as ten months go, I can think of worse ways to do it."

The Abraham Lincoln Carrier Strike Group team executed over 1,285 sorties totaling 28,437 hours to include 392 combat sorties encompassing 1,140 combat flight hours in direct support of friendly forces in Afghanistan and Syria. The air wing successfully employed 42 precision-guided munitions with a combined weight of more than 70,000 pounds, destroying enemy targets and fighting positions in direct defense of coalition forces on the ground.

In a release, the Navy said the Abraham Lincoln Carrier Strike Group also participated in numerous interoperability and partnership-building exercises with sister services and allied navies in both the U.S. 5th and 6th Fleets, demonstrating the U.S. Navy’s capability to rapidly aggregate power across combatant commands to meet emerging missions and contingencies.

As it transited through U.S. 7th Fleet, the strike group also conducted flight operations in the South China Sea in support of a free and open Indo-Pacific.