Helping vets with PTSD, through the power of comedy 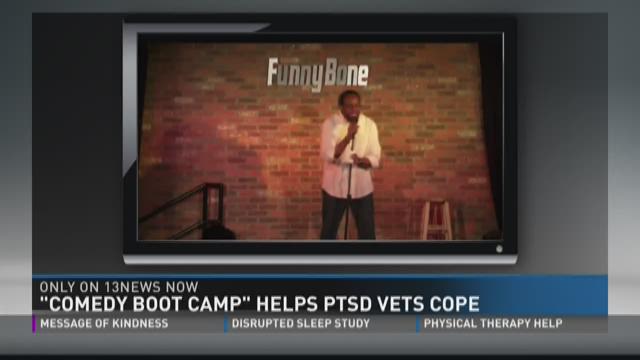 Professional comics are working with PTSD patients, helping them share their life stories through, of all things, stand-up comedy.

A new documentary on WHRO, "Comedy Boot Camp," focuses on the effort. It's a show about a therapeutic treatment unlike any other--Using comedy, to help vets with PTSD cope.

"We thought it was really a unique opportunity to see the power of comedy in story-telling," said WHRO Marketing Director Joy Yoo.

There are 18 million veterans in the United States today, more than 217-thousand here in Hampton Roads.

The problems they face coming back from Iraq and Afghanistan are no joke.

According to the Rand Corporation, least 20 percent of post-9/11 vets have PTSD and/or Depression.

"Comedy Boot Camp" follow a group of vets, as they learn how to be stand-up comics and along the way, discover a new way to discuss the struggles they've faced rejoining the civilian world.

The show is a part of WHRO's on-going 'Veterans Coming Home Initiative."

"It was a huge undertaking for our team," said Yoo. "We had over 300 hours of footage throughout the Hampton Roads region. Probably one of the biggest crews ever on one of our original productions. We're just really excited to kind of story tell the different lived experiences of the military and veteran community here in Hampton Roads."

The program premieres Monday on WHRO.