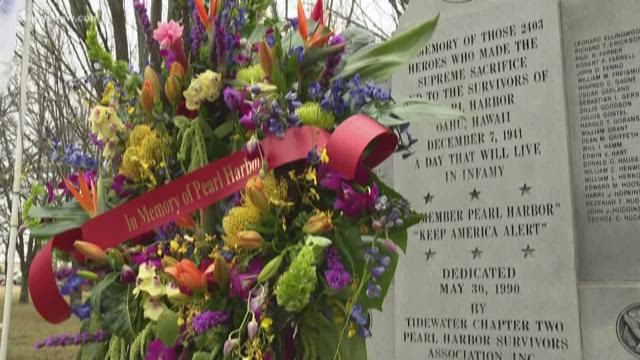 President Roosevelt called December 7, 1941 “a date that will live in infamy.”

Joint Expeditionary Base Little Creek-Fort Story marked the occasion with a service at the chapel on base and a wreath-laying at the memorial dedicated to the local survivors of the attack.

“I was two and a half years old," Sue Radford Rice said. "I was out in the yard; I could see the pilot's faces in the planes as they flew over our house. We lived just across from the gate.”

More than 3,600 service members were wounded or lost their lives in the Pearl Harbor attack.

On Friday, active service members, retired military, friends, and family continue to remember those who made the ultimate sacrifice and those who survived.

Robert Michalove’s father-in-law, James Thomas Langston was on base aboard the USS Pennsylvania.

He said his father-in-law buried the memories of the attack for decades because they were just too painful.

“He was looking right across the channel when the USS Arizona went up. He didn’t speak of it for 60 years. It wasn’t until the 60th anniversary of the attack that he opened up,” Michalove said.

“When he did speak of it, it brought him to tears. He said he could still smell the burning flesh and felt guilty he couldn’t do anything for his buddies on the Arizona.”

Siblings, Gerry Chebetar and Ellen Chebetar Burns say their father, Frank Chebetar survived the attack and went on to fight in WWII.

“They set the example for us going forward in today’s world," Burns said. "It was a strong group as it was called, the greatest generation.”

They attend the ceremony every year to make sure his service isn’t forgotten.

“It’s very important because so many things have been lost in today’s society, today’s world," Chebetar said. "People need to understand that if it wasn’t for the brave men and women who serve in the armed forces and still serve today, we wouldn’t have what we have.”

The chapel service started at 12:55 p.m., the exact time the Japanese military attacked Pearl Harbor at 7:55 a.m. in Hawaii.

It ended with a wreath-laying ceremony at JEB Little Creek-Fort Story’s Pearl Harbor Memorial which bears the names of the 192 known local survivors of the attack.

Bill Pier attended the service in memory of his cousin, Ernest Eugene Corey.

“He was killed December 7 on the USS Arizona when it sunk,” he said. “Our military history should never be forgotten about.”

RELATED: Sailor who killed 2 at Pearl Harbor was reportedly unhappy with commanders

RELATED: Governor Northam: All flags at half staff to honor those who died at Pearl Harbor