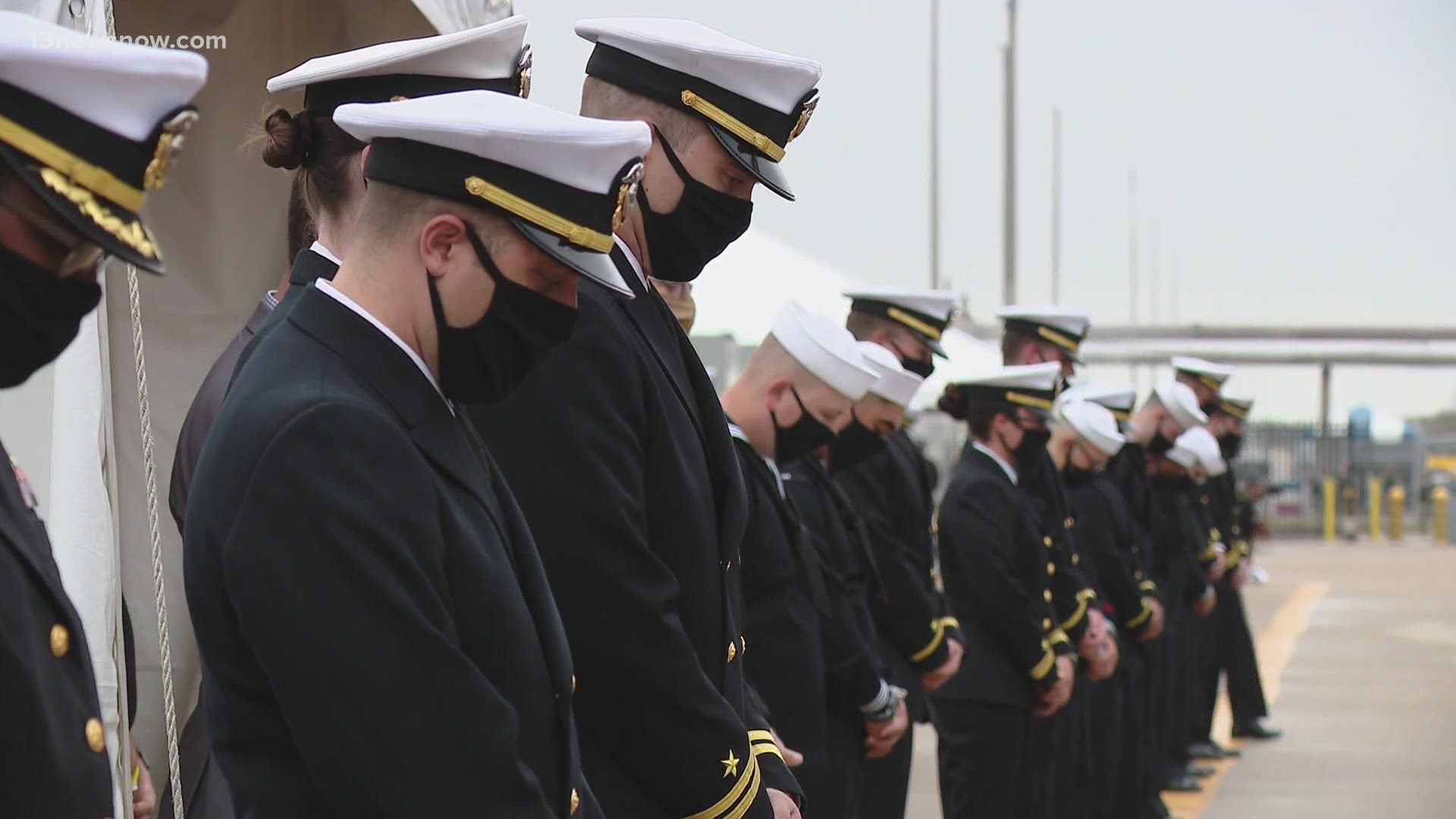 NORFOLK, Va. — Two decades to the day after the terrorist attack that President Bill Clinton called "a despicable and cowardly act," current Navy leaders, former USS Cole crew members, and relatives of the 17 sailors who died came together to remember.

One of the darkest days in Navy history happened before most people in the United States had even heard the phrase "al-Qaida" or the name, Osama bin Laden.

On Monday at Naval Station Norfolk Pier 12, with the guided-missile destroyer for a backdrop, speakers talked about the fighting spirit of the warship called "Determined Warrior."

"We gather to remember those that we lost too soon," said U.S. Fleet Forces Commanding Officer ADM Christopher Grady,  "We remember the heroic actions of the crew, and reflect on the responsibility to carrying the Cole's legacy forward."

Grady called the attack "insidious," adding: "Our Cole sailors rose to the occasion, they upheld our finest traditions. They personified the Navy fighting spirit."

Former Atlantic Fleet Commanding Officer, retired Admiral Robert Natter was also in attendance. He said how the Cole crew responded reminded him of the Navy heroics on display at Pearl Harbor in 1941.

"Despite the severity of the blast, Cole was kept afloat only through the Herculean damage control efforts of the crew over several days, all while standing ready to defend the ship against a possible second attack," he said.

Each fallen sailor's name was read out loud, accompanied by the ringing of a ceremonial ship's bell. An honor guard fired a 21-gun salute. A lone bugler played "Taps."

Afterward, former Cole sailor Norm Larson said he knew each of the 17 shipmates who died. "Some better than others," he said, while wearing a tie with the initials of each of the fallen stitched into it.

"It's very comforting to my entire family," he said.

To look at the Cole today, she looks no worse for wear. But 20 years ago, following the suicide bombing, it was a far different story.

The terrorists blew a 40x40-foot hole right in the port-side bulkhead. And from that moment forward, it was a 96-hour fight to save the ship.

"And what those sailors did to save their shipmates, to save the ship, really it's one of the most heroic efforts at damage control in the history of the United States Navy," said the ship's current commanding officer, CDR Ted Pledger, who was a midshipman at the Naval Academy that fateful day.

Some members of his crew weren't even born yet or were just babies.

"And for us here today, 20 years later, to be part of that legacy, we're just incredibly proud," he said. " And I know the crew works really hard to maintain that legacy that those determined warriors established 20 years ago. The courage and determination, the heroic efforts on display on October 12th, 2000, it's really an American story. It's a story of true grit. And toughness. And determination. And those sailors, they did not stop and they literally saved their ship from sinking."

Also aboard the Cole today: visual reminders of what happened that day and in the hours thereafter are not hard to find.

The lessons are not lost upon the Cole's modern-day sailors.

"I don't think I actually knew really what happened until I got to the Cole," said FC2 Emilio McPherson. "It's really just such a big part of the knowledge that we have to know, being on here."

Added LSC Brian Weil: "They paid the ultimate sacrifice. That's why every day we come in to work, yeah, it gets overwhelming. It gets really busy. But, there's no reason for us to feel bad about that. Because they already paid then sacrifice for us. so, we've got to keep going for them."

The 17 fallen Cole heroes are gone, but, they're never forgotten.

Diane McDaniels had seen on the news that the Cole had been attacked. Her son Seaman James McDaniels -- "Little Mac"  they called him -- was just 19.

She described that day she got the word that Little Mac had been killed.

"I started walking downstairs and I see these men walking up," she said. "And you know from TV  they're going to tell you bad news. They're not coming to tell you no good news. And so I just kept walking, because I didn't want to hear it, you know. And they said, 'Are you Diane McDaniels?' And I said no. And then I was like... I felt bad. I can't do my son like that. And I said yes. And we went back upstairs. And they told me."

Her fun-loving, basketball and video game playing son was gone, along with 16 of his shipmates.

One thing that could help would be a resolution to the criminal case against the alleged mastermind, Abd al-Rahim al-Nashiri, who's been sitting in a cell in Guantanamo since 2002, never tried.

"It's not fair," said McDaniels. "It just makes me mad that they are doing that. But I try not to dwell on it. I'd be happy when they go ahead and convict him, whatever sentence he gets, fine with me. But I can't dwell on it because it's been going on, what, 18 years or so? It seems like it's never going to end."

The Navy spent $250 million to fix the ship. It has deployed six times since the attack. The next deployment is scheduled for 2021.