A Sailor who pleaded guilty to charges in connection to the jet fuel spill at Naval Air Station Oceana in May, has been discharged. 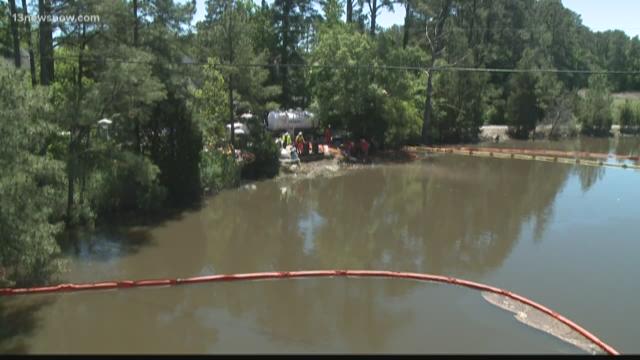 NORFOLK, Va. (WVEC) -- A Sailor who pleaded guilty to charges in connection to the jet fuel spill at Naval Air Station Oceana in May, has been discharged.

He was charged with alleged willful dereliction of duties, alleged false official statement, and alleged loss of military property in September.

A total of nine uniformed military personnel, ranging in grade from junior enlisted Sailors to senior officers, received disciplinary or adverse administrative actions as a result of this incident.

About 94,000 gallons of jet fuel leaked from a tank at NAS Oceana on the morning of May 11. Almost 25,000 gallons leaked into nearby streams.

"We have a responsibility to be good stewards of the resources the American public entrusts to us to defend the nation," said Commander, Navy Region Mid-Atlantic, Rear Adm. Jack Scorby. "We take these responsibilities seriously and we hold people accountable when they don't. We set high standards for our people and we won't tolerate those who fall short of those standards."

Following the spill, the Navy reviewed the best practices and procedures to be put into place at NAS Oceana and everywhere the Navy operates.

The fuel management process has also been changed to prevent similar accidents. Engineers added a spring loaded drain valve, in addition to the existing manually set valve that automatically stops the fuel flow when personnel release the lever.

According to the Navy, the wetlands and environment impacted by the spill are being monitored monthly during visual inspections. The Navy is also expected to complete a follow-up environmental testing of the affected area later this month. The test will determine if fuel remains in the soil, groundwater sediment, or surface water in the area.

The total cost of the response for cleanup efforts and support to affected families was about $3.8 million.