Marine Corps Pfc. Edward Nalazek left the seminary to fight in the Battle of Tarawa. He was buried in a lost grave, found recently by the nonprofit, History Flight. 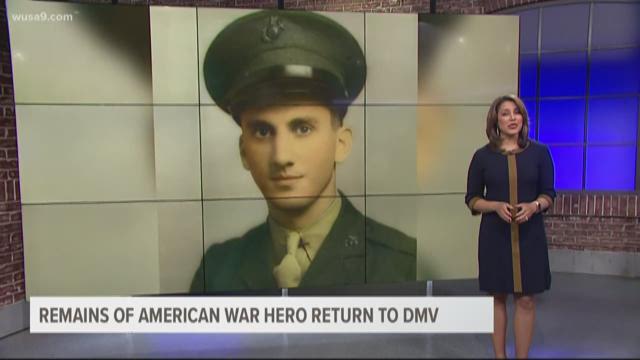 ARLINGTON, Va. — He was buried in a lost grave for two generations – feet from shipwrecks strewn across an azure lagoon, a South Pacific battlefield remembered by the Marine Corps as, "one square mile of hell."

It was 7,000 miles from Catholic University, where Private First-Class Edward A. Nalazek left the seminary, bound for a different calling in the middle of World War II.

"My Uncle Eddie was the golden boy of an immigrant, Polish family," Dr. Kathleen Winifred McNicholas said in an interview Monday. "He was a scholar, he was an athlete, lifeguard, handsome. The saddest part was, my grandmother knew he had died, because she got no further letters from him."

The 27-year-old’s family learned of his death when a Marine knocked on their front door on New Year’s Day, 1944.

RELATED: TIMELINE: The Battle of Tarawa & a family's journey to the truth

Nalazek lost his life somewhere on a sandbar the size of the National Mall, killed in action during the Battle of Tarawa.

It was where an imposing Imperial Navy garrison and air base guarded the frontier of Japanese territory. The battle beginning Nov. 20, 1943 marked America’s first offensive in the region, fought 14 months before the Battle of Iwo Jima.

In all, 961 American servicemen died in the primary attack on Tarawa. The number of Japanese who survived, 17, could be loaded into a small bus.

"It was horrible, and we had, not a shrine exactly, but his memory was always there," McNicholas said. "It was always Uncle Eddie, and where was he? His mother said she tried to get him back, because she didn’t want to fail."

The recovery of Nalazek’s remains proved elusive. Family members recalled there was a legend he was buried at sea. Tarawa, a tiny atoll halfway between Australia and Hawaii, was unreachable for his Illinois relatives.

But in truth, Nalazek was laid in a burial trench near the island’s port, fallen and forgotten for more than 70 years.

Navy construction battalions moved an original grave marker, as they worked to transform the decimated island into a functioning American outpost.

Aerial photographs and Defense Department documents show Nalazek’s gravesite was paved over by a parking lot in early 1944, part of a shipping depot still in operation to this day.

"It was anguishing to think maybe our generation would leave, without knowing what happened to him," McNicholas said. "It wasn’t even conceivable that we’d be here at Arlington, today, for his funeral."

Just as the rain stopped on a cold February morning, Marines and generations of family members who Nalazek never knew laid his remains to rest – returned to the sacred soil of Arlington National Cemetery, 76 years after his family was notified of his death.

The moment was a product of tireless research and excavation efforts by the Fredericksburg nonprofit group, History Flight.

History Flight anthropologists based on the island used ground-penetrating radar in the summer of 2015 to discover Nalazek’s lost burial trench.

RELATED: Could your relative be MIA on Tarawa? Here’s our WWII database

After extensive DNA testing, scientists with the Defense POW/MIA Accounting Agency in Hawaii positively identified the Marine’s remains on Aug. 27, 2019.

"When they said they thought they found him, it was just too much and too hard to believe," McNicholas said. "I think it’s a miracle and we owe everything to History Flight, to DPAA, to the Department of Defense."