The semiannual physical readiness test had slight changes that previously were not done by midshipmen at the Naval Academy. 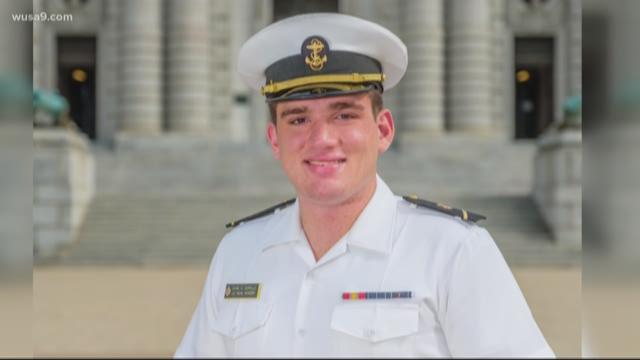 ANNAPOLIS, Md. — The Naval Academy announced that a midshipman died on Saturday in Annapolis during its semiannual physical readiness test.

The Naval Academy said Carrillo was rushed to Anne Arundel Medical Center, where he died around 12:30 p.m. The midshipman's name and information weren't released until Sunday.

"My wife, Joanne, and I join the Brigade, staff and faculty in mourning the sudden and tragic loss of Midshipman Duke Carrillo," said Vice Adm. Sean Buck, 63rd Superintendent, U.S. Naval Academy. "Our most heartfelt sympathies and condolences go out to the entire Carrillo family, and our extended Naval Academy family, during this extremely difficult time."

Carrillo was studying Quantitative Economics at the academy, where he was accompanied in Annapolis by his two brothers, Dyland and Jake, both of whom are still midshipmen.

The Naval Academy said that Carrillo was an avid intramural athlete, and a member of the Naval Academy’s Flight Training Squadron, VT-NA. He had served as a Naval Academy Summer Seminar squad leader this past summer, and had aspirations of being a naval aviator.

"I am honestly able to say he was friends with everyone and uplifted those around him. Due to his calm and loving personality, he will be especially missed in 24th company," 24th Company Officer Lt. Sara Lewis said.

According to the Naval Academy's website, planks were added to the Feb. 8 physical fitness test, while curl-ups were removed.

The physical fitness test also included pushups -- in this test for the first time -- performed with a two-second cadence.

"The Naval Academy is supporting the midshipman’s family, friends, and loved ones during this time of grief. Grief counseling services and support are available to midshipmen, faculty and staff through chains of command, our chaplains, and the Midshipmen Development Center," said the academy in a statement.