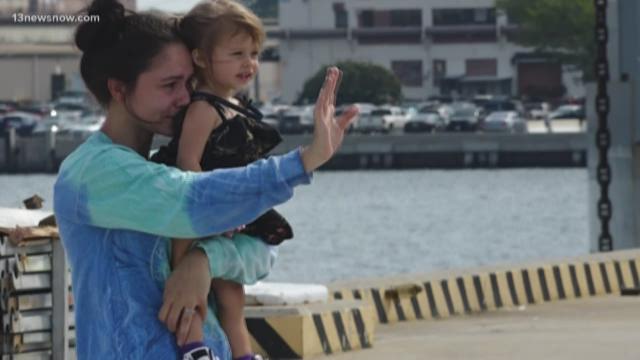 The ship and its crew of 300 sailors are part of the Harry S. Truman Carrier Strike Group, but this is an independent deployment, with the Ramage leaving on its own.

Commanding Officer John Benfield says the team of sailors is ready for whatever comes its way.

"I cannot tell you how proud I am of this crew, I can personally attest to the efforts they put in on a daily basis to make sure that we are really ready to go and execute whatever missions we may have to," said Commander Benfield.

Commander Benfield said the sailors have to be prepared to man the ship.

"It is capable of a wide array of mission sets, including ballistic missile defense. And we can employ those wherever the Navy would need us to go,” said Commander Benfield.

Kia Ricks said she was proud to see her son on the destroyer.

"I'm just very blessed and very grateful that he has this opportunity. But he's definitely going to be missed for Thanksgiving and Christmas. I'm just hoping we can get through it,” said Ricks.

Another mother on the dock, Cindi Bullman, said she’s honored to see her son serve for the Navy.

“I'm sad, but excited for him. It's fun watching them grow up and do great things. We're very proud, we have a military family so it's wonderful having him follow the tradition,” said Bullman.

RELATED: Daughter commissions 63-year-old father as a Commander in the U.S. Navy

From 2016: USS Ramage back home after 8-month deployment