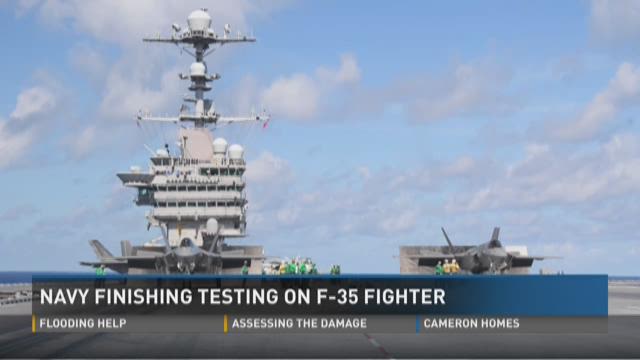 ABOARD USS GEORGE WASHINGTON (WVEC) -- The Navy is finishing up its third and final round of sea-based developmental testing on its fighter jet of tomorrow, the F-35-C Lightning Two Joint Strike Fighter.

The experimentation is taking place this week in the Atlantic, aboard the U-S-S George Washington, 100 miles off the coast of Virginia, in the Atlantic Ocean.

The Air Force earlier this month proclaimed that its variant of the stealthy F-35 Joint Strike Fighter has reached "initial operating capability."

The Navy's not quite there yet, this week, finishing up two years of at-sea testing.

The $100 million, single engine airplane features a revolutionary software upgrade that makes the flight's final moments far easier for F-35 pilots. It's called "MAGIC CARPET," and What it does is put the jets into a sort of automatic landing mode that guides the plane's trajectory to the deck and reduces any frantic adjustments out of the process.

"It extremely reduces the workload of landing aboard the aircraft carrier, making it a really enjoyable experience." said LCDR Daniel Kitts.

But getting to this point has been anything but easy.

The Joint Strike Fighter, with more than 400 deficiencies, including numerous hardware malfunctions and software glitches during testing, is already the most expensive weapons program in U.S. History.

And by 2014, the program was already $163 billion over budget and 7 years behind schedule.

Still, Navy leaders are optimistic about what the future holds.

"There's always a risk when you're doing something that's new," said RADM Roy Kelley. "So there's always some concern. But at the same time, we've had some very good successes with the programs."

The Navy hopes to have the Joint Strike Fighter operational by February, 2019. Between the Navy, Marine Corps and Air Force, the plan is to eventually purchase and fly 2,443 of them.

Members of Congress are weighing in.

"Like many of my colleagues, I have been very concerned with the cost and production issues with the F-35 Joint Strike Fighter program. We have to make sure that our limited national security resources are being used effectively, efficiently and responsibly. While efforts have been made to shift the burden of cost overruns from the government to the contractor, the issues that have plagued the F-35 program are a case study for the need to improve and reform the Defense Department’s acquisition system. Acquisition reform and improving F-35 procurement as the program moves forward will remain at the forefront of issues that Congress will need to address as we continue our work on the Fiscal Year 2017 National Defense Authorization Act.”

“I believe the F-35 represents the critical upgrade our military needs to maintain aerial dominance. Both the Marine Corps and the Air Force have declared the F-35 ready for combat, and the Marine Corps, Air Force, and Navy are all working it into their planning and training schedules. Of course cost and timeliness are important in the acquisitions process, but ultimately this aircraft is on track to fulfill its operational obligations.”