The City of Norfolk has declared a local state of emergency, and the City released ways for residents to stay safe during Hurricane Florence. 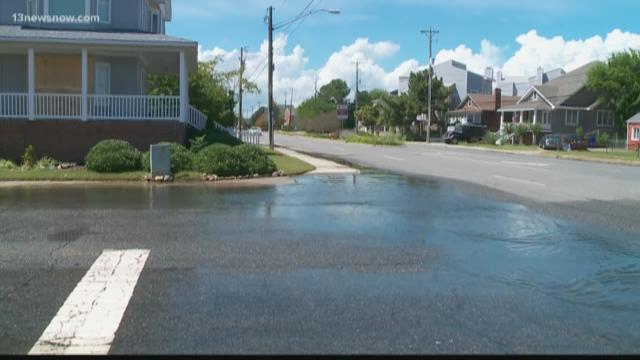 City crews have been preparing for the storm, and have been cleaning storm drains and ditches to ease potential flooding. Extra crews are even on standby throughout the weekend to respond to downed trees due to the wind and saturated ground.

The city asks residents to ensure curbs, gutters, and ditches on your property and on your street are clear of debris. They also are asking residents to check on their neighbors.

Any loose items in residents' yards and on the street should be tied down or brought inside to prevent damage during the storm. The City is asking residents to be prepared to be self-sufficient for 72 hours after the storm in case Norfolk experiences power and utility loss.

All City facilities and Courts will close at 5 p.m. Tuesday to prepare for the impact of Hurricane Florence.

The City will open shelters for those residents who need a safe place to ride out the storm. Food and security are provided. Residents must bring personal items, medications, bedding, blankets and other comforts of home. Residents who need transportation to the shelter should call the Norfolk Cares Center at (757) 664-6510.

Residents who bring pets to the pet-friendly shelters must bring food and water and are responsible for pet care while at the shelter with their animal.

The following shelters will open at 1:00 p.m Wednesday:

The City and Old Dominion University opened garages so that residents can move their vehicles to higher ground. The following City garages will open at 7 p.m. Tuesday.

The following Old Dominion Parking garages are open now and available for use:

In anticipation of inclement weather, Pace bikes will be temporarily out of service and removed from bike racks by noon Wednesday.

For storm-related inquiries or to report downed trees or other storm-related damage, including downed power lines or flooded and impassable streets, call the Norfolk Cares Center at (757) 664-6510.