Investigators said they found more than 5,000 pieces of undelivered mail at a Chesapeake home during a search warrant for an unrelated case. 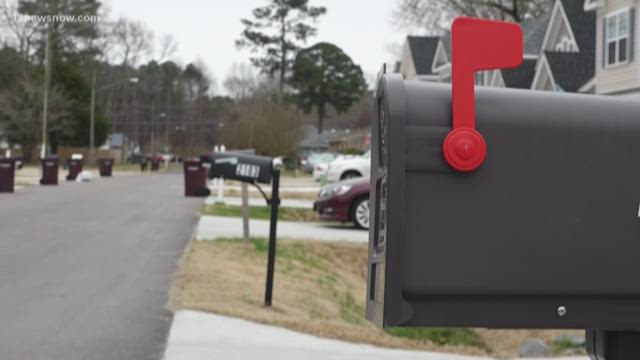 NORFOLK, Va. — Police entered a Chesapeake home looking for evidence in a murder investigation. Inside, they found thousands of pieces of undelivered mail and realized they had another investigation on their hands.

"That baffles me, it's really strange," neighbor Lois Garcia Quevedo said. "That is really odd."

Police found the mail at the home on English Avenue during a search warrant for a different case.

On October 24, officers arrested Anthony Allen Worlds on a first-degree murder charge for a Portsmouth killing.

While searching the home of Worlds and his wife Toya Worlds, investigators found the undelivered mail.

According to court documents, Toya Worlds said she didn't have time to deliver the mail, but admitted to keeping it. She will be sentenced in June.

The same court documents said Worlds did not destroy the mail, but she did open two packages and a letter. Neighbors said they're confused and are wondering if they missed out on mail themselves.

"I'd be upset because I sell stuff so I have to have my mail come constantly," Garcie Quevedo said. "And for somebody's mail to be missing, that's a federal offense."

Some of the hoarded mail was set to be delivered throughout Hampton Roads. Documents said it was returned to USPS for possible re-delivery.

Toya Worlds had been employed with USPS since May 2016. Anthony Allen Worlds' murder trial is set for April 18 in Portsmouth Circuit Court.