Experts from CNU's Wason Center for Public Policy say a few political headlines are fueling what they're calling a potential 'blue wave.' 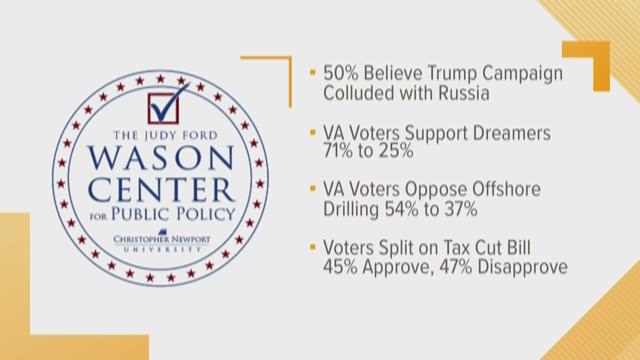 Their experts say a few political headlines are fueling what they're calling a potential "blue wave."

Of the Virginia voters polled, half of them believe people on the Trump campaign colluded with Russia during the 2016 election. State voters polled also strongly support DREAMers and heavily oppose offshore drilling off Virginia's coast.

But Virginians polled are split on the new tax cut law.

"More foreboding for Republicans competing in this year's election, is that his disapproval for "strongly disapprove" is 52 percent," she said. "So that tells us there is a lot of passion against Donald Trump in the state of Virginia."

Bitecofer also added that the favorable field for Democrats in Virginia means Senator Tim Kaine may not have strong competition leading up to the primaries. Another poll released earlier in the week showed him with a solid lead against several GOP candidates.