Dan Kennedy sat down with Rep. Elaine Luria and her challenger, Scott Taylor, to discuss the several topics important to voters in the 2020 general election. 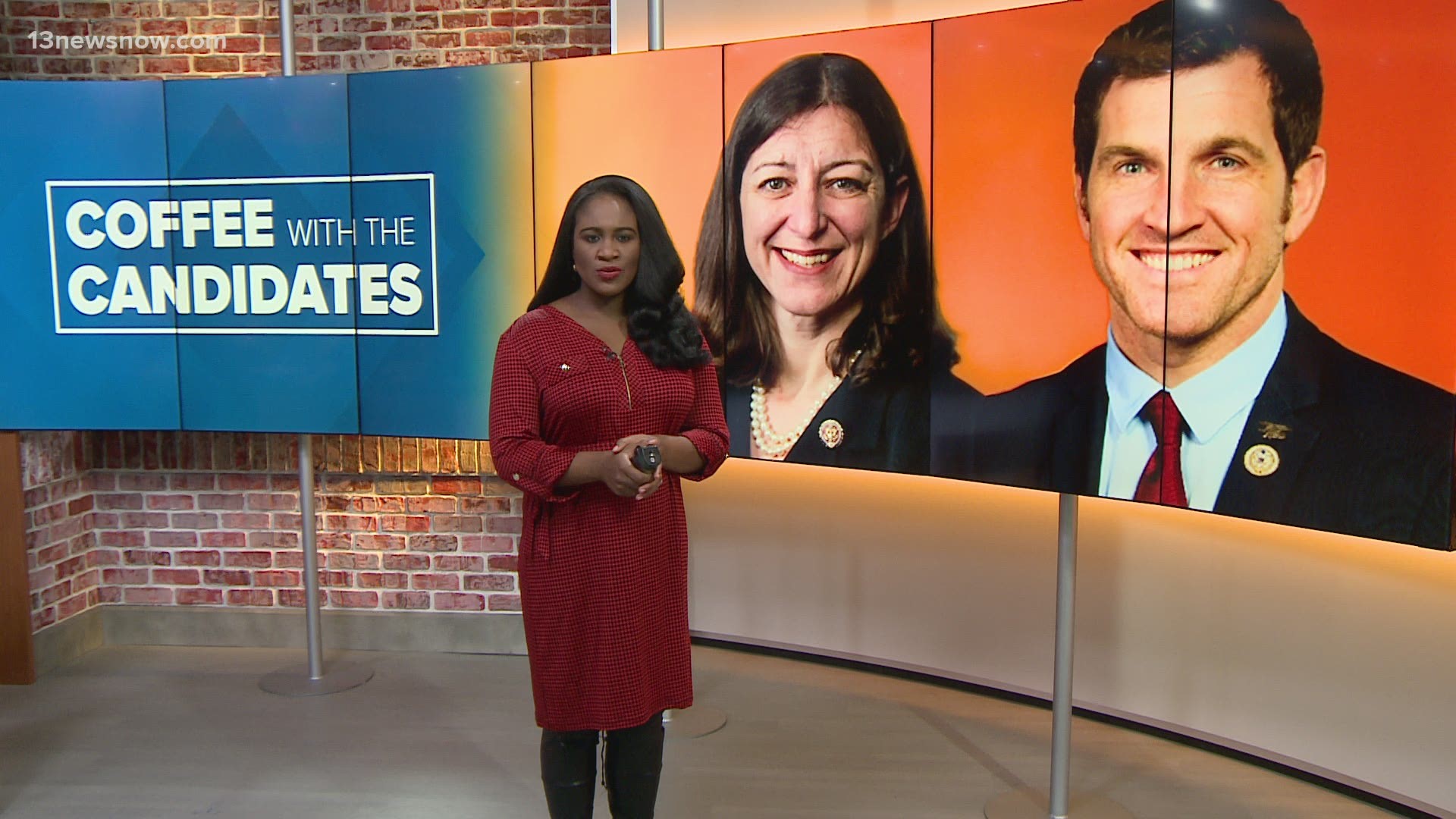 I met with both candidates separately over coffee at COVA Brewing in Norfolk to talk about issues important to voters this election.

In our third and final series with Rep. Elaine Luria and Scott Taylor, the candidates discuss the strategy behind negative advertisements.

By now, you’ve seen the commercials both for and against Taylor and Rep. Luria. So many of them are attack ads.

We asked the candidates why their campaigns choose to run the negative ads?

“Well you’ll have to ask her that question,” Taylor said. “I see it – her only path to victory – is not to tout her record and what she’s done and hasn’t done, it’s to smash me and smear me.”

“I run ads that point out my opponent's record,” Luria said. “[We] have an ad talking about the ongoing investigation into his petition fraud scandal, where three of his staffer members have been indicted and two convicted from the last campaign.”

Taylor said he’s innocent of any wrongdoing related to the signature scandal involving his 2018 campaign.

“I’ve been very clear from the get-go that I knew nothing of the wrongdoing,” Taylor said. “There is zero direct evidence to show otherwise. Elaine Luria has known that for two years. She ran the same campaign two years ago.”

Much of that money is actually coming from Super PACS rather than the campaigns, and it’s those PAC-backed commercials that are often the ugliest.

“I think the purpose of it is pointing out the difference between yourself and your opponent,” Rep. Luria said. “I’m also very running positive ads for the work that we’ve done to help Gold Star Families, the work we’ve done to help Blue Water Navy Veterans.”

In the end, both candidates said the ads are their chance to defend their political and personal records.

“I’m going to defend myself of course which I think anybody views as necessary,” Taylor said. “I’m also going to highlight what she said she was going to do and what she’s actually done or not done, so I think contrast is 100 percent fair.”

In the second part of this three-part series, I asked each candidate for their thoughts on police reform.

“No one likes a bad cop worse than a police officer who does their job well and is proud of their service they provide to their community," Rep Luria said.

On the topic of police, Rep. Elaine Luria and Scott Taylor have similar messaging.

Both know the issue well, having worked on separate congressional bills aimed at improving policing.

“I actually passed a couple years ago, a community police bill in the House of Representatives that was endorsed by law enforcement and the Congressional Black Caucus, which is all democrats," Taylor said. “This community policing bill would call for more funding, so that officers can be in their communities and spend a lot more time in their communities so they understand each other and build relationships there.”

“I’ve supported a bill in Congress called the Justice for Policing Act and it ends some of these different practices, such as no knock warrants, and chokeholds, it helps provide body cams for police and additional training that will help police end racial bias and racial profiling," Rep. Luria said.

Both candidates agreed that one could be a supporter of both the police and Black Lives Matter.

“I think to move where we need to move as a country, we need to all be on the same page," Rep. Luria said. "I strongly support the Black Lives Matter movement and I strongly support having a quality, well-trained police force that’s going to help serve and protect our communities.”

In the first part of this three-part series, I asked each one how to target hard-hit Americans best with more COVID-19 relief money.

“I think its vital that we can help these small businesses survive and help them keep the jobs that they’ve created in our communities," Luria said.

She and several of her democratic colleagues were in their party's minority when they voted against the Heroes 2.0 Bill at the start of October.

“My main objection to the Heroes Act, the original one and the 2.0 version, was that it didn’t focus directly on the most essential needs during the pandemic such as helping small businesses, helping with tracing and tracking, helping state and local governments recover from the pandemic. And it wasn’t done in a bipartisan way.”

Taylor said if he were in office, he would've sided with House Republicans while voting against the bill.

“I think we should be helping people, like directly helping them, and leaving out the partisan wish lists from there," said Taylor. “From the CARES Act, there’s actually appropriated funds out there that are not allocated. What’s Congress been doing for months?”

The House's proposed bill totaled $2.2 trillion, while the White House has reportedly countered with a bill worth $1.8 trillion.

And while negotiations seem deadlocked at times, Luria and Taylor agree that now is not the time to be concerned about adding to the nation's deficit.

“I think that in a time of something unprecedented like this, with the global pandemic and the effects its had on the economy, I think we need to do what we need to do to shore up our economy, because if we allow these businesses to close and these jobs to be lost, we’re just going to suffer more down the road," Luria said.

"When you are in a fire fight, you’re not saying, 'Oh my God, I need to conserve some of my bullets,' no no no, you are winning the fight and helping people," Taylor said. "You can look back at things and adjust as needed but when you’re in the middle of a crisis, you’ve got to make decisions and not making a decision is worse than making one that may be imperfect.”