An opening prayer filled with a mix of religion and politics didn't sit well with some Virginia lawmakers. 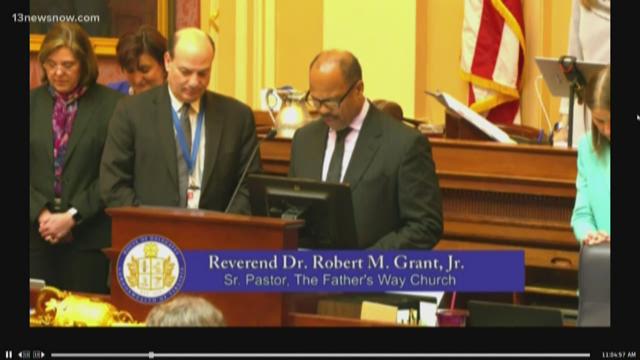 NORFOLK, Va. — On Tuesday, some Democrats in the House of Delegates had to stop the opening prayer.

Pastor Robert Grant Jr. from Warrenton prayed on several issues, including prison reform and condemning abortion. Six minutes into the prayer, turned the subject to marriage.

"Marriage is to join a biological male and a biological female in holy matrimony; not to provoke the almighty God. Without laws to protect traditional marriage Virginia will be reduced to increase fatherless children and welfare victims and homelessness and a tax burden to us all," said Grant.

At that point, House delegates had enough. Speaker Eileen Filler-Corn banged her gavel and the Pledge of Allegiance immediately began, bringing an abrupt end to Grant's prayer.

In Norfolk, some LGBT advocates read a portion of his prayer.

"We’re looking to get equal rights for LGBT Virginians, and so it’s been... it’s kind of exhausting to constantly face this kind of backlash towards progress being made," said Transgender Assistance Program member, Katherine Kaywinnet.

"We just encourage them to look into what they're speaking out against and talk to LGBT community members in an open way, nor in a hateful way," said LGBT Center of Hampton Roads member Callum Foley.

Norfolk Delegate Jay Jones walked out during the prayer, later tweeting, "As a man of faith, even I was deeply offended."