Election Day 2019: Everything you need to know

Polls are now open in Virginia and North Carolina! We broke down all of the information you need to know to vote today. 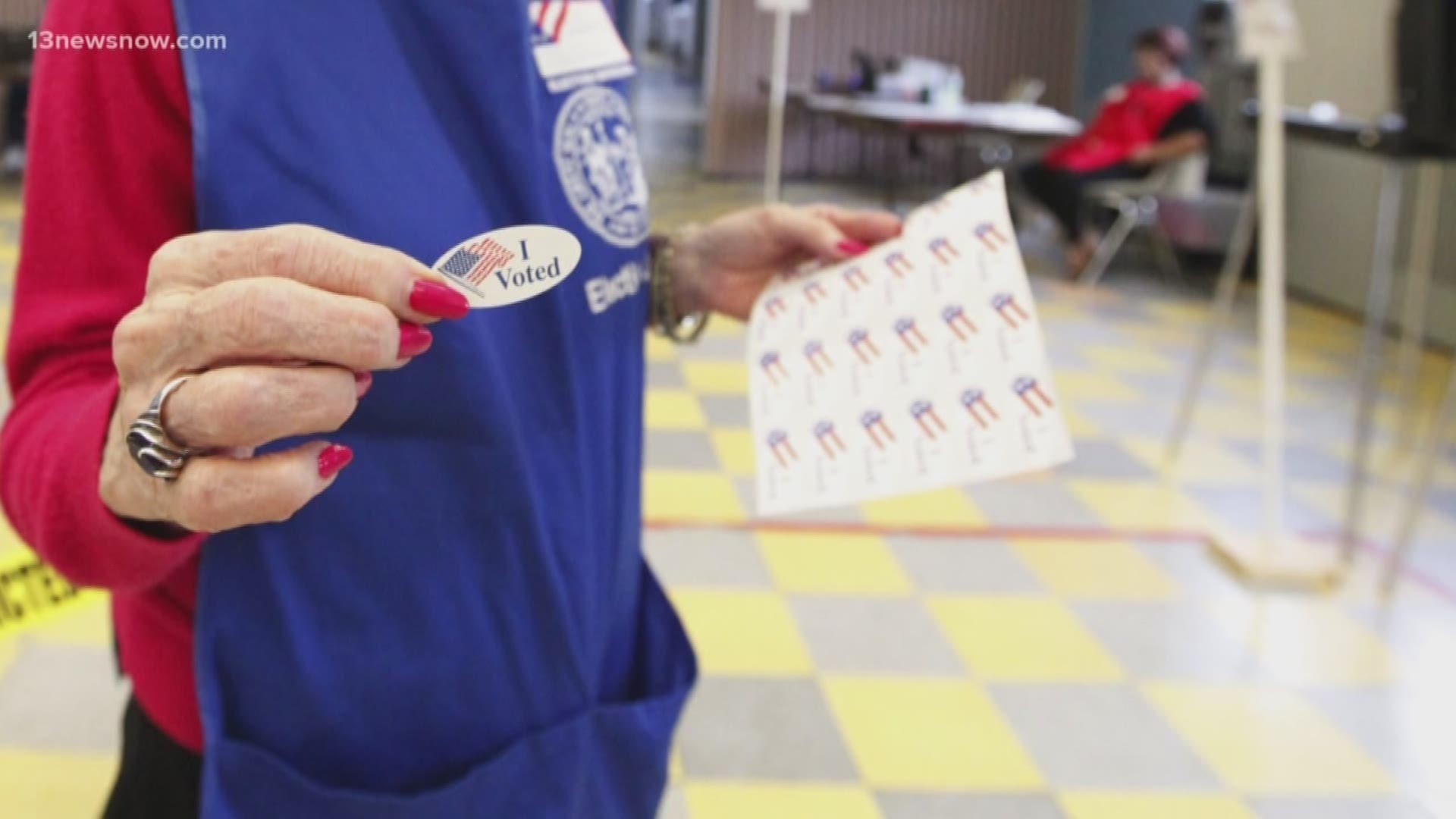 VIRGINIA, USA — Election Day is November 5, 2019. 13News Now broke down everything voters need to know in Virginia and North Carolina ahead of the big day.

First and foremost, voters need to know where to go vote. Redistricting in both states may have changed where individuals can go submit a ballot.

What to bring when voting:

Anyone who is voting in Virginia in person needs to bring an acceptable form of photo identification.

Voters arriving at the polls without photo ID will be required to vote a provisional ballot and will have until noon on the Friday following the election to deliver a copy of identification to their locality’s electoral board for their provisional ballot to be counted.

Here's a list of acceptable forms of identification for in-person voting in Virginia:

In North Carolina, photo ID is not required in any election in 2019. However, starting in 2020, North Carolina voters will be asked to provide photo identification when voting in-person or absentee-by-mail, with some exceptions. Here are the guidelines for voting in North Carolina in 2020.

RELATED: Voters in Virginia Beach show up early to cast their votes for off-year election

How to get to the polls:

Different organizations and companies are offering free or discounted rides to the polls on Election Day.

Senior Services of Southeastern Virginia and its community transportation partners, which include Coastal Ride, Black and White Cabs, Norfolk Checker, and Yellow Cab of Norfolk are offering this service to provide access for seniors to be able to vote.

Individuals that want to arrange a ride should call Senior Services of Southeastern Virginia at 757-963-9218 no later than Monday, Nov. 4.

The service is available free of charge for registered voters 60 or over, who live in Norfolk or Virginia Beach and have no available transportation.

Election day is right around the corner, and some voters might not know who is running in their district.

13News Now has a full breakdown of all the candidates running in the Commonwealth and North Carolina.

13News Now's Military and Political Reporter Mike Gooding also sat down with a few candidates ahead of the election. Full stories below:

In the Old Dominion, Virginians are deciding which party should control both chambers of the General Assembly, in a widely watched contest that will test how voters feel about President Donald Trump and his possible impeachment.

One of only four states having legislative elections this year, Virginia is the only one with control of the statehouse up for grabs in what's become a marquee warm-up for the 2020 election cycle.

Republicans currently have a slim majority in both the state House and Senate. Democrats are hoping to take total control of the statehouse and Executive Mansion for the first time in more than two decades.

Over in North Carolina, residents are getting a say in who their next mayors and council members will be.

Municipal elections are being held on Tuesday in cities, towns, and villages covering 92 of North Carolina's 100 counties.

Mayors are being chosen in places like Wilmington, Durham, Rocky Mount and Charlotte, where incumbent Democrat Vi Lyles is seeking a second two-year term. She faces Republican David Michael Rice. Charlotte city council and Charlotte-Mecklenburg school board candidates also are on the ballot.

Bond referendums are also on some local ballots.

13News Now will be covering the November 5 election. All votes and winners will be announced on-air or online here.

RELATED: 1 Year Out: A divided nation lurches toward 2020 election