Virginia has officially become the critical 38th state needed to ratify the amendment into the Constitution, although many questions remain on its ultimate fate. 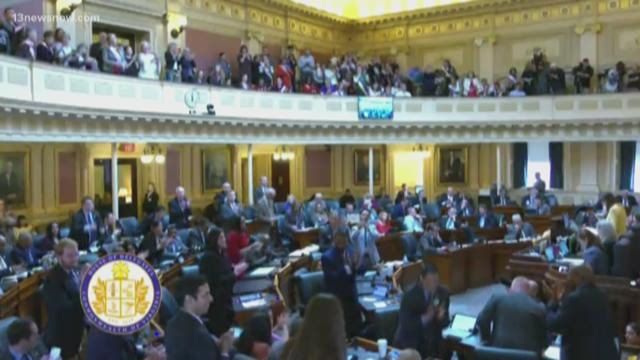 State lawmakers made history earlier this month when each chamber of the General Assembly separately approved ratification resolutions. On Monday, the House and Senate took the final procedural step of signing off on each other's measures.

That action took place with women presiding over both chambers. Virginia's ratification opens a new chapter in the nearly century-long push to get the amendment added to the Constitution.

Many legal scholars expect courts to settle the issue.

The amendment states "equality of rights under the law shall not be denied or abridged by the United States or by any state on account of sex."

RELATED: Virginia voted to ratify the Equal Rights Amendment. But it's just the beginning of another legal fight

At the national level, many questions remain about the fate of the proposed amendment first introduced nearly a century ago.

Eileen Filler-Corn, Speaker of the Virginia House of Delegates, released the following statement on the Virginia General Assembly officially ratifying the Equal Rights Amendment to the United States Constitution.

"Finally, women have a place in our nation’s founding document.

We stand today on the shoulders of the thousands of women – and men – who have fought for the last 97 years to secure the Equal Rights Amendment’s ratification.

By the action we have taken today, our daughters and their daughters after them will have equal protection law. While putting gender equality in the United States Constitution does not right the injustices of history in the Commonwealth or our nation, nor does it cure all forms of discrimination, we have sent a signal to America today of a shared commitment to a more just and equal future.

The Equal Rights Amendment will be enshrined in the Constitution of the United States in very short order.

While the amendment originally passed Congress with overwhelming support in 1972, it needed to be ratified by three-quarters of the states because it was a constitutional amendment. But a certain ruling set by Congress created a 1982 deadline for ratification.

Virginia had taken up the ERA across several legislative sessions in the 1970s, where it failed every time. The closest the amendment came to ratification in the Commonwealth was during the 1980 legislative session when then-Lt. Governor Charles Robb was expected to break a tie in the Senate in favor of the ERA.

But Republican Senator John Chichester of Fredericksburg used a parliamentary maneuver to abstain from voting, preventing a full 40-member vote. Under Senate rules at the time, an absolute majority of the Senate -- or at least 21 votes -- was required for approval of a Constitutional amendment.

"So those favoring passage of the ERA wound up in the ironic position of needing one more vote against their cause to give them the victory they sought," The Washington Post reported at the time.

The amendment went down in defeat, and two years later the ERA supposedly expired without Virginia's ratification.

Below is video from our archives on the amendment's 1980 defeat:

Forty years later, a very different Virginia General Assembly is hoping to reverse that decision, although the Department of Justice has recently said the ratification holds no legal bearing because the deadline passed decades ago.

"We conclude that Congress had the constitutional authority to impose a deadline on the ratification of the ERA and, because that deadline has expired, the ERA Resolution is no longer pending before the States," read a legal opinion from the Justice Department's Office of Legal Counsel.

Supporters of the gender equality amendment say that the DOJ's deadline is up for interpretation and that ratifying the amendment sets an important precedent for women's equality.

Some efforts to challenge the deadline are already in full swing. In November, the House Judiciary Committee proposed a joint resolution that would remove the previous 1982 deadline. With a Republican-backed Senate, the future of the resolution is unclear, making a courtroom battle highly likely.

The Associated Press and WUSA9 News contributed to this report.