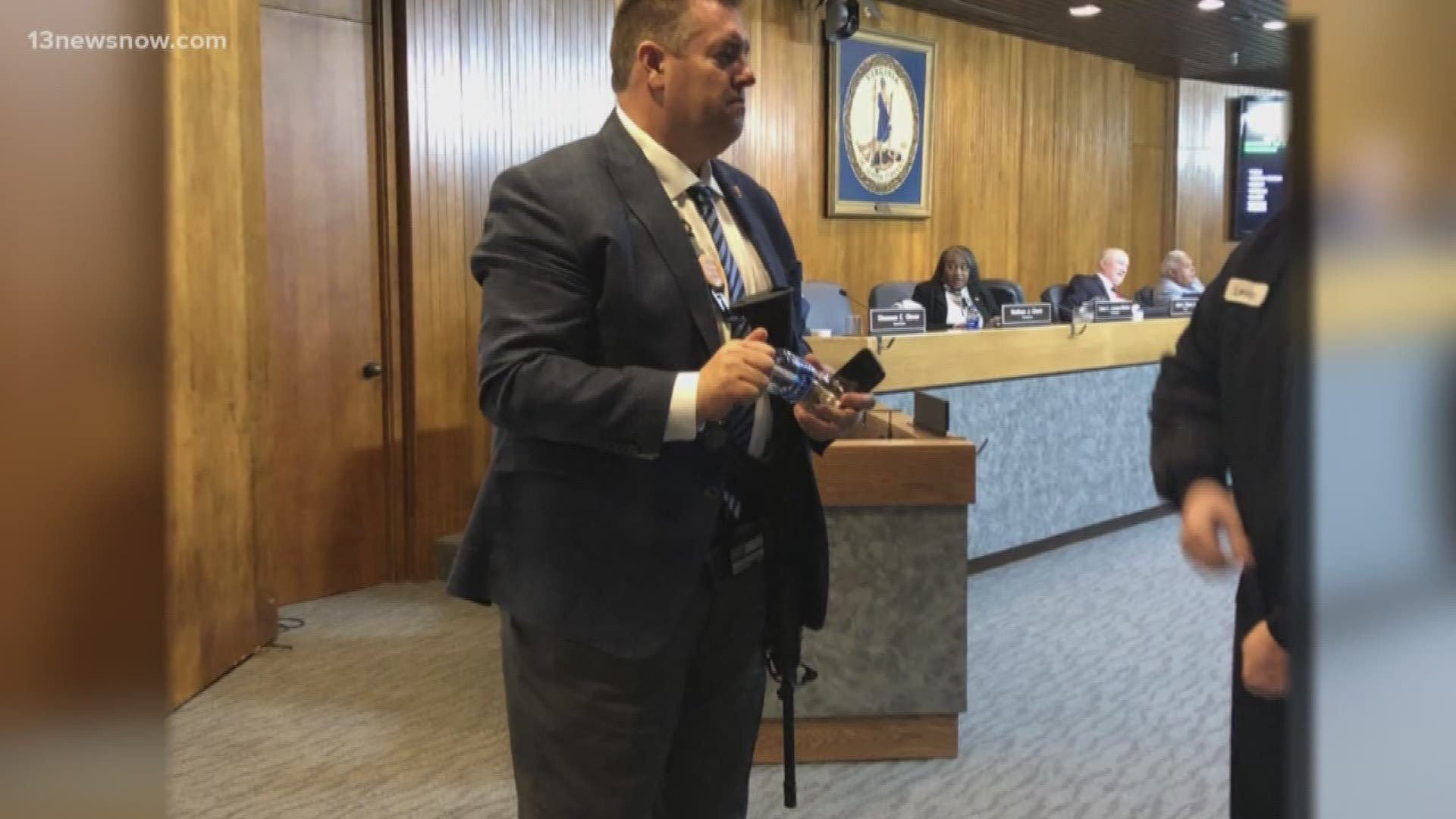 PORTSMOUTH, Va. — The father of one of the students killed in a high school shooting in Parkland, Florida in 2018 said Portsmouth City Councilman Nathan Clark should resign.

Fred Guttenberg tweeted out the call for Clark to step down after he saw photos of Clark with an AR-15 strapped across his chest. Guttenberg spoke with 13News Now staff on Wednesday.

"Your councilman, showing, 'Hey I can walk around here with an AR-15 strapped to my shoulder,' was a form of open intimidation," Guttenberg said.

Councilman Clark released a statement Wednesday night in response to a call for his resignation.

"The Parkland shooting was undoubtedly a tragedy, and no one should have to go through that. I have been in law enforcement for 30 years and at one point I was a school resource officer - I can’t begin to imagine being in that situation.

"I stand by my actions last night. My intentions were far from negative, as I was standing up for what is right. I acted positively, and received plenty of positive feedback in return. As I previously stated, I will continue to stand by the oath I have taken as a veteran, law enforcement officer, and member of Portsmouth city council.”

Other Second Amendment resolutions have passed in cities and counties across Hampton Roads, including Chesapeake, Virginia Beach, Gloucester County, Isle of Wight County, and Mathews County.

Credit: 13News Now
Portsmouth City Councilman Nathan Clark showed up to a council meeting where council members were expected to discuss Second Amendment rights with an AR-15 strapped to his chest.

Clark had a prepared statement he made to the media before the council meeting started Tuesday night. In it, he explained why he showed up with the AR-15:

First and foremost, thank you for your respectful approach regarding this hot-button issue regarding the rights bestowed upon us as constituents of this city, state, and country.

Now, I'm sure some of you are wondering why I appear before you with a gun strapped across my chest. I will attempt to be brief with my response.

The weapon I wear this evening is not a replica; it is not a toy. This weapon is one of the most controversial, centering itself between the two sides of this debate. This weapon is an AR-15 semi-automatic rifle.

To some, this weapon looks and appears to be scary and intimidating, and some believe it to be downright dangerous. I can assure you, as long as this gun is strapped to my chest, it will not harm you. It will not be aimed or brandished, and the trigger will not be pulled. It will not shoot itself.

You see, I am a law enforcement officer. Though this weapon is personally owned, I am issued the same weapon by my agency. While I hope to never have the need, I must defend my right to bear this weapon as a means of protecting the citizens I serve while on duty, and my home when I am not.

The newly proposed gun legislation for the state of Virginia is ludicrous. The legislation will make criminals of lawful citizens and gun owners. Again, I am a law enforcement officer, and if this legislation is passed, I will also be made a criminal.

Taking away the rights of our citizens not only puts them in greater danger, but the act is unconstitutional. Criminals have always and will always break the law. We must punish the existing criminals for their actions, and not take away the means of defense from law-abiding citizens.

I have taken an oath as a soldier in the army, as a law enforcement officer, and a member of this council. I took the oath to defend The Constitution of The United States of America, and I don't plan to break that oath now, or in the future.

For these reasons, I stand in support of the second amendment, as a citizen, veteran, police officer, and member of this council, and I oppose the newly proposed gun legislation.