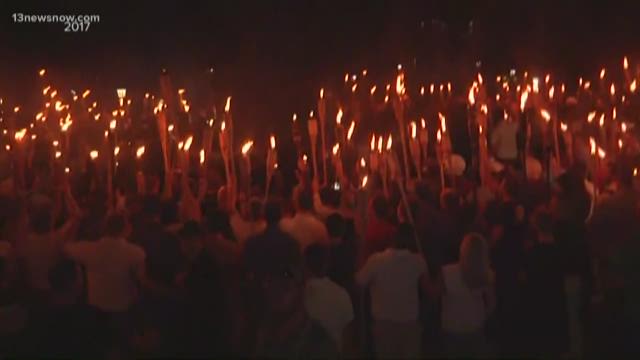 RICHMOND, Va. — It's been a few years in the making, but a package of hate crime bills reintroduced by Attorney General Mark Herring has passed through the Virginia House and Senate.

The legislation updates Virginia's definition of a hate crime and protects citizens from violence and intimidation by hate groups, white supremacists or domestic terrorists.

It also increases the attorney general's power to prosecute hate crimes and creates stronger sentences for those convicted of an act of domestic terrorism. Additionally, anyone who's convicted of a hate crime will be prohibited from owning a gun.

All that's left is for the measures to be signed into law by Governor Northam.

Herring first introduced these bills in 2017, but they were killed in a majority-Republican statehouse. With the Democrats in current control of both the House of Delegates and the Senate, the measures have advanced with ease in this legislative session.

Hate crimes rose in the Commonwealth by about 31 percent over the last six years, according to a Virginia State Police report. The Unite the Right rally in Charlottesville in 2017 also triggered a statewide conversation about the growth of white supremacy groups.

“Hate crimes and white-supremacist violence strike at the heart of communities and try to force entire groups of Virginians to live in fear and remove themselves from public life, or compromise their identity,” said Attorney General Herring. “These crimes inflict damage on the very fabric of our communities themselves. This ideology is corrosive and pernicious. When it festers it undermines the belief in the pluralistic society we treasure."

You can read more about the measures as well as statistics on hate crimes in Virginia by clicking here.