Jason Nixon, husband of Virginia Beach shooting victim, upset over use of his name in political ad

The Republican Party of Virginia admits they used Nixon's name in an ad supporting Senator Bill DeSteph without Desteph or Nixon's permission. 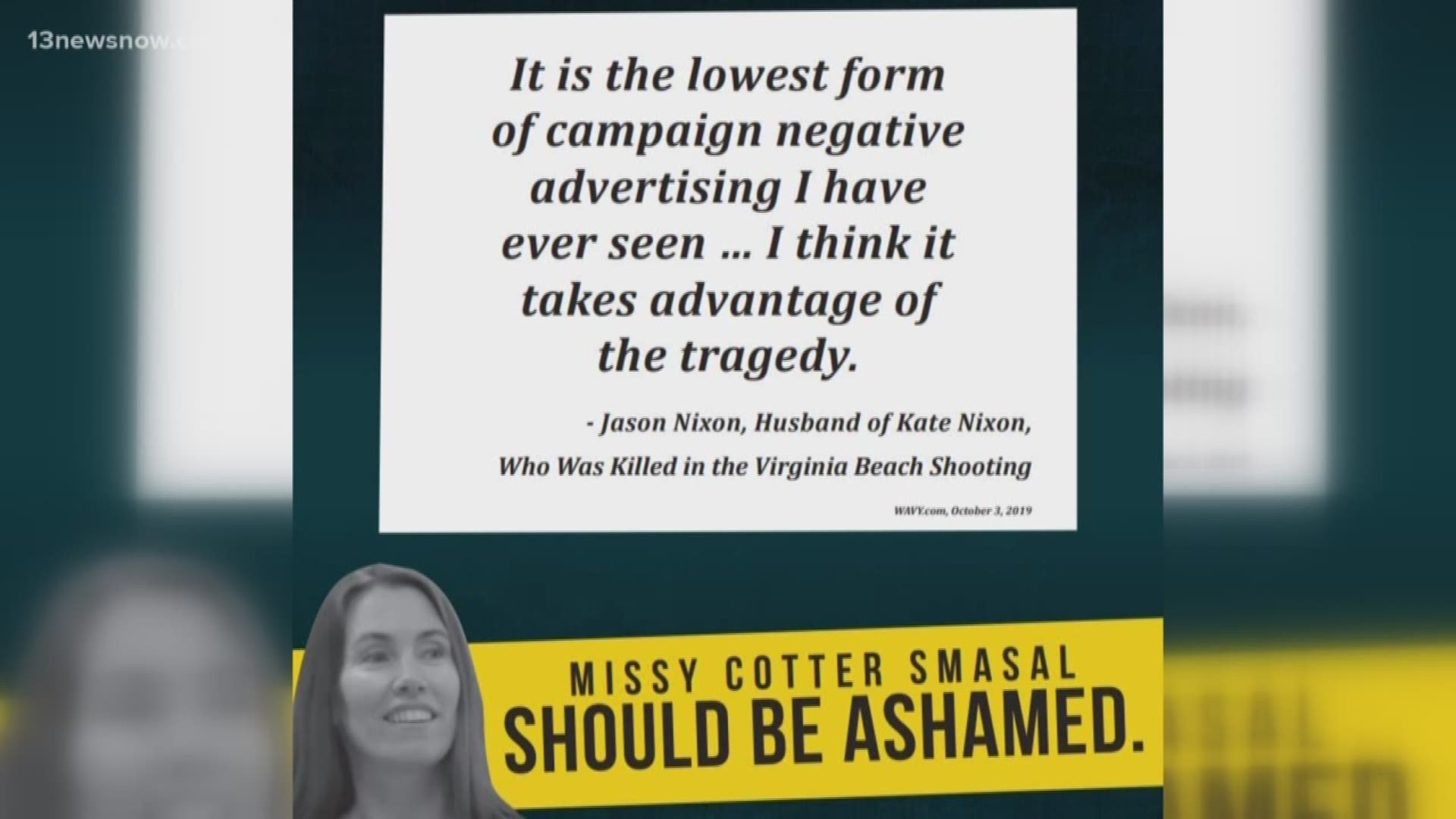 VIRGINIA BEACH, Va. — Jason Nixon, whose wife Kate died in the mass shooting in Virginia Beach in May, is calling out one political ad in particular.

It was put out by the Republican Party of Virginia and it backs Senator Bill DeSteph, who is running for re-election in the 8th District.

"I didn't give him permission to put my name in the ad," said Nixon.

The advertisement quotes Nixon from a previous interview he did. During that interview, he criticized an ad for DeSteph's opponent, Missy Cotter Smasal.

The Cotter Smasal ad featured a survivor of the mass shooting. Nixon said he had problems with Cotter Smasal's ad because it politicized the tragedy.

Now, the ad supporting DeSteph is doing the same in mailer form and it's using Nixon's words to do it.

"I just kind of feel like I got thrown into a pickle, back and forth now, and I don't like that. It's not something I intended to be involved in," said Nixon.

Nixon said he sent a letter to DeSteph's office Friday, saying in part:

13News Now took Nixon's questions straight to John Findlay, the Executive Director of the Republican Party of Virginia and asked him about the mailer which was sent to several thousand homes.

"Bill DeSteph did not know about, had no control over, and we sent it out without his authorization from the Republican Party of Virginia to highlight this issue for the voters in the district," said Findlay.

In fact, the mailer, which was paid for and sent by the party, even said at the top: "Not authorized by any candidate or candidate's committee."

"I don't know why they did it because they didn't have my permission to do so," said Nixon.

Findlay told 13News Now the party did not get Nixon's permission before using his name in the mailed ads.

Although he knows how Nixon feels about the ad, Findlay isn't sure the party would change anything about it.

"I would have to talk to Mr. Nixon first before really commenting but I think what we did was appropriate," said Findlay.

Senator DeSteph told 13News Now he didn't approve or know about this ad.

In fact, he said he just saw it himself two days ago when he got it in the mail.

Senator DeSteph said he would never politicize the tragedy or use someone's name in an ad without their permission.

He said he hasn't seen the letter yet but he tells me he's more than willing to sit down with Jason Nixon and talk and help in any way he can.

The full letter Nixon sent to DeSteph and the ad he's calling out can be seen below.