Gun rights advocates plan to hold a pro-gun rally in the state's capital. This is planned in response in lawmakers efforts to create stricter gun control. 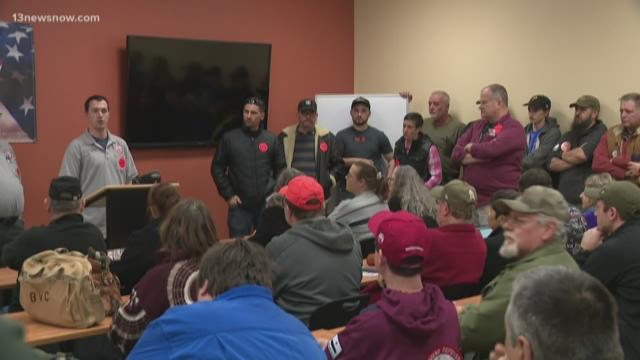 NEWPORT NEWS, Va. — Gun advocates from across Virginia are getting ready to fight for their rights at a large demonstration next week in response to more restrictive gun bills making their way through the General Assembly.

On Monday, buses will take people from all over the state to the capitol for a pro-gun event. But these gun advocates will not be allowed to carry on Capitol grounds.

Governor Ralph Northam declared a preemptive state of emergency to maximize resources for Monday’s pro-gun rally, given concerns about extremists. His ban on all weapons runs until Tuesday.

A day after Northam's ban, three men linked to a violent white supremacist group were arrested by the FBI. The men were believed to be heading to the rally with heavy weaponry.

The Virginia Citizens Defense League appealed the ban, but on Friday night, the Supreme Court of Virginia denied the petition to overturn it.

As that news broke, local members of the VCDL gathered at Freedom Shooting Center in Virginia Beach to talk logistics and hash out last-minute details about its lobby day rally on Monday.

Thousands of members of the VCDL and other outraged pro-gun folks are expected to flood the streets of Richmond to voice their opposition against what they're calling aggressive gun legislation.

Brendan Mooney, an executive member of VCDL, wanted to make it clear at the meeting Friday night: VCDL does not condone extremism or violence.

"We do not tolerate extremism, ever. That is never OK. If I have any volunteers that even hint at that stuff, they are ejected immediately," he said.

He reiterated that sentiment to the packed room of people, almost all of whom say they will be at the rally.

What many people may not realize amidst all this controversy over the proposed gun laws is that VCDL holds this event every year.

"It's always been a good, well-organized event," Mooney said. "This, obviously because of the legislation being proposed, is a bigger event this time."

Matt Green is among the dozens of people who are taking a bus from Newport News to Richmond through VCDL.

“I came here because of the Second Amendment concerns, and now they're proposing something worse than Connecticut,” Green said. “I want to see them do things that are more effective, like combat crime, enforce existing penalties."

There are others from Hampton Roads who are headed to Richmond on Monday, including a gun-rights activist from Suffolk and York-Poquoson Sheriff Danny Diggs. Sheriff Diggs is pledging to stand strong against infringements on the right to keep and bear arms.

Several cities and counties across Virginia have declared themselves Second Amendment sanctuaries, meaning they will fight against any new restrictive gun control laws that threaten their constitutional rights.

The Gloucester County Board of Supervisors recently passed a resolution making the county a Second Amendment Sanctuary. Tim Sheesley was at that meeting and is also headed to Richmond.

“It's important to be a part of the group of people advocating to stop the erosion of our Second Amendment rights in Virginia,” Sheesley said.

Green is hoping for a peaceful rally, and for lawmakers to throw out proposed legislation instead of tabling it.

“No law-abiding citizen wants to be a felon for following the Constitution,” Green said.