"A lot of the time his talk can be very divisive, and that's the last thing we need in Dayton," Mayor Nan Whaley said. 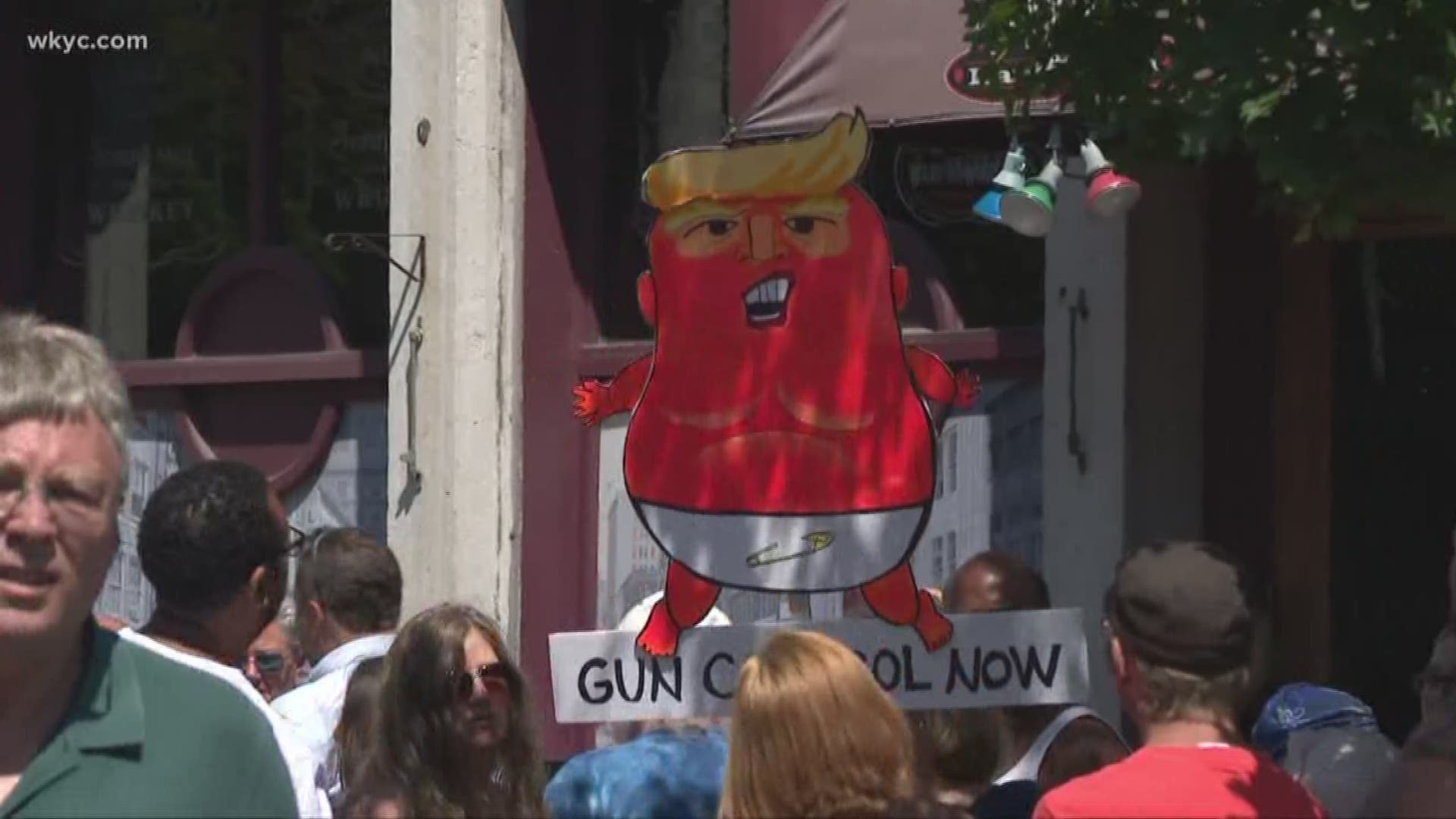 DAYTON, Ohio (AP) — Ohio Democratic officials say they were gratified by President Donald Trump's visit to Dayton, the scene of a weekend mass shooting, and said Trump was treated respectfully, despite the fact some didn't agree with his past rhetoric or policies.

However, the president is now taking to Twitter to criticize the two, claiming a news conference they gave after he left "a fraud."

Mayor Nan Whaley told reporters she felt those affected by Sunday's shooting that left nine dead and dozens injured appreciated his visit. She has been critical of Trump's response to the shootings and had told citizens to feel free to voice their dissatisfaction. Hundreds did so Wednesday in protest of Trump's visit.

"I think the victims and the first responders were grateful that the president of the United States came to Dayton," the mayor said, adding she felt it was probably good Trump did not visit the site of the shooting.

"A lot of the time his talk can be very divisive, and that's the last thing we need in Dayton," she said.

1 / 5
Shealah Craighead
President Donald J. Trump and First Lady Melania Trump visit victims of Sunday’s attack and their family members Wednesday, Aug. 7, 2019, at the Miami Valley Hospital in Dayton, Ohio. Nine people were killed and 27 others were injured in a mass shooting on Sunday in the Oregon District of Dayton.

Sen. Sherrod Brown said that while he is "concerned about a president that divides in his rhetoric and plays to race in his rhetoric," Trump "did the right things" in his visit to survivors in the hospital and first responders. He said that privately, some people told him they weren't Trump admirers but "showed respect for the office."

More than two hours after he and the first lady left for El Paso, Texas (the site of a previous mass shooting), Trump tweeted that Brown (whom he called a "failed Presidential Candidate") and Whaley "totally misrepresent[ed] what took place inside of the hospital...It bore no resemblance to what took place with those incredible people that I was so lucky to meet and spend time with."

In addition, Assistant to the President and White House Director of Social Media Dan Scavino Jr. called Whaley and Brown "Trump Hating Dems." He insisted Trump "was treated like a Rock Star inside the hospital," and that the mayor and senator were "LYING & completely mischaracterizing what took place w/ the President’s visit."

Scavino also shared photos of the president at Miami Valley Hospital, where much of the staff around him can be seen smiling.

White House Press Secretary Stephanie Grisham later chimed in, saying Trump  "graciously asked Sen Brown & Mayor Whaley" to visit victims with him and it was "genuinely sad to see them immediately hold such a dishonest press conference in the name of partisan politics."

While they have not yet commented on the president's latest remarks, Whaley and Brown said they urged Trump to push gun restrictions in the Republican-controlled U.S. Senate. Whaley said she bolstered her pitch by noting Ohio Gov. Mike DeWine, a Republican, voted for an assault weapons ban while in Congress.

Zeke Miller and Jill Colvin of the Associated Press contributed to this report.