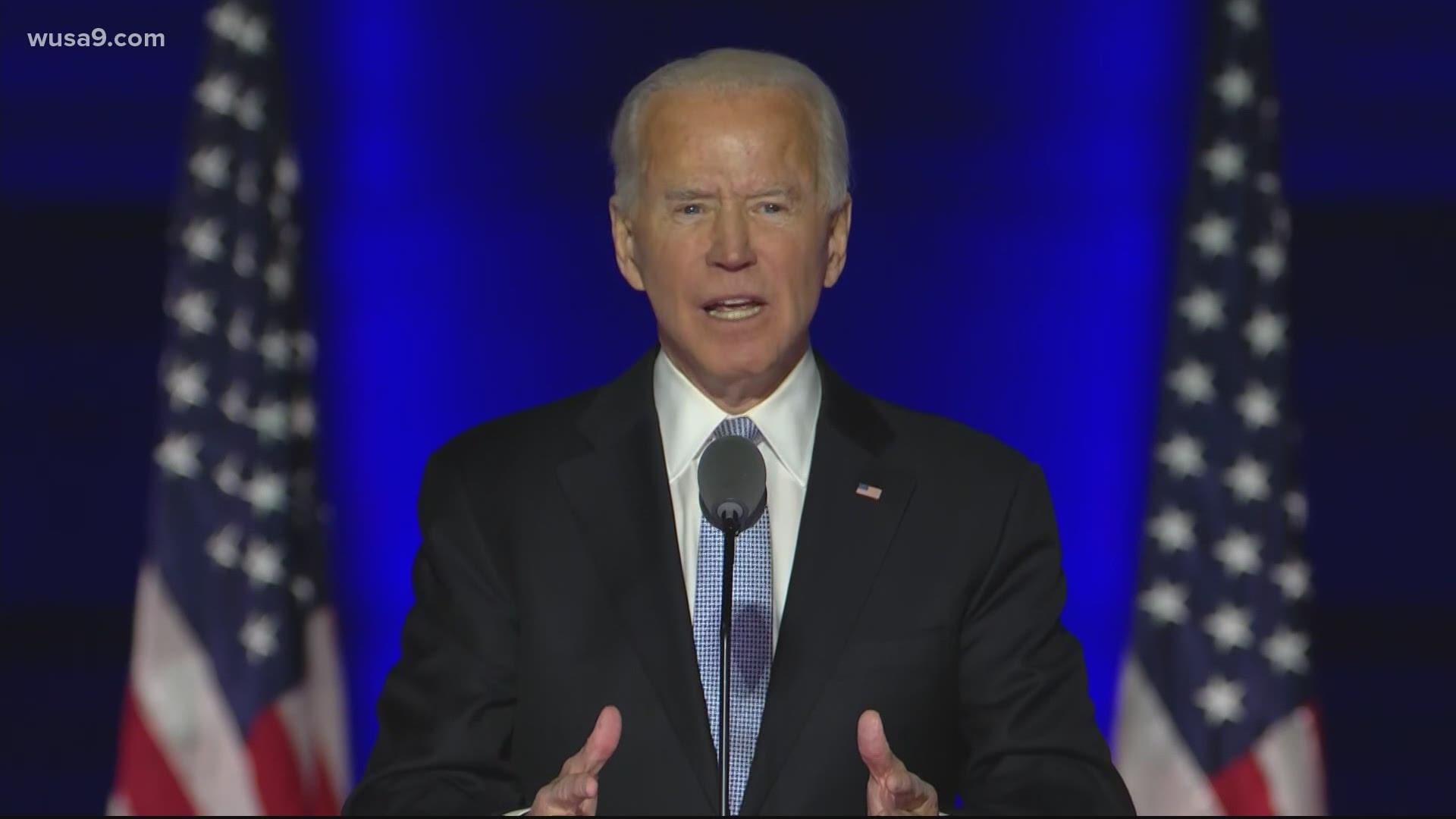 WASHINGTON — The projected victory for President-elect Joe Biden and running mate Vice President-elect Kamala Harris will bring some big changes to Washington for Democrats and Republicans.

With Biden clinching the 2020 presidential race on Saturday, the victory brought a mix of emotions and reactions from local leaders on both sides of the aisle.

Former Democratic Governor of Virginia Terry McAuliffe said he has known President-elect Joe Biden for most of his life.

"This is his whole life. I’ve known him for 40 years, he gets along with people, he wants to work, he’s got great relationships with Republican senators. Stop the partisan fighting and start dealing with the issues that matter to Americans sitting at home," said McAuliffe.

Fairfax GOP Vice Chairman Sean Rastatter said President Trump supporters are waiting to see how the legal fight over the vote turns out.

"Americans deserve continuity in the election. Americans want to feel like they got a fair shake here and I think it’s important, what harm could it possibly do to make sure that all the irregularities are investigated and checked out, that we have the continuity that we need in the election," said Rastatter.

"We’ve got to recognize there are 70 million people who voted for Donald Trump and they are angry. I understand that, but we have to move past the election and start addressing the concerns they have," said McAuliffe.

"I will not rest until the American People have the honest vote count they deserve and that Democracy demands."
— President @realDonaldTrump

"I think a lot of Americans at this point, myself included are tired. We are tired of the election season, we want to move on with our lives. We’re going to make sure that the irregularities are investigated either in the courts or by the DOJ but I don’t think Americans right now have a taste for this kind of rioting and violence and the stuff we saw after the 2016 election. I just don’t think it’s going to happen. I think Americans are ready to move on," said Rastatter.

Now both men said they will keep their eyes on Georgia with control of the senate still up for grabs.

"I’m curious to see what will happen, the Republican party is certainly focusing on that and we feel like we’ve got a good shot at taking the seats," said Rastatter.

"It’s going to come down to these two special elections in Georgia for control of the Senate. You know, I hope we get it but if we don’t, he has a good relationship with Senator Mitch McConnell and they’re really going to have to forge it," said McAuliffe.

RELATED: 'This is a moment of joy' | DC reacts to projected Biden victory with cheering, singing, champagne

"Personally I’ve been working for two years to make sure that Donald Trump could get elected in Virginia. We did not get the result we wanted but I’m ready to move on and I know that we have elections in Georgia that are going to make a pretty big difference. We have elections next year with the governor’s race so things keep going," said Rastatter.

"I just think there’s a sign of relief, he has got to hit the ground running with big, bold and decisive decisions," said McAuliffe.