One measure includes limiting the number of handgun purchases to one a month. 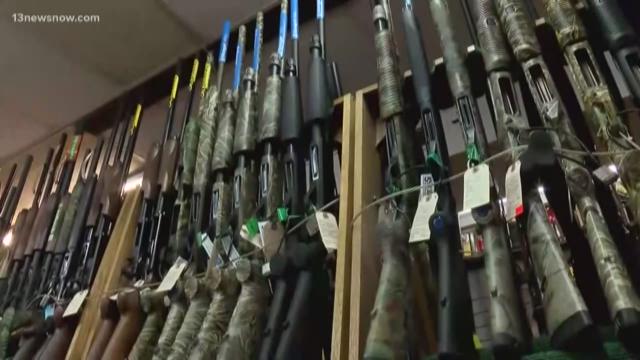 The legislation includes authorizing communities to ban firearms in a public space during a permitted event, reinstating a law that limits purchases of handguns to one per month, and a so-called 'red flag law' that allows officials to take guns from people who pose a threat to themselves or others.

One bill that passed on a substitute version would require running a background check for firearm transfers.

Senate Bill 16, however, was pulled by Democrats. It's one of the most often mentioned bills during the Second Amendment Sanctuary discussions we've seen in recent weeks. The bill would expand the definition of assault weapons and subsequently ban them.

A similar bill is sitting in the House of Delegates, however, but has yet to get a committee referral.

The Senate Judiciary Committee was packed with people on both sides of the issue. Next Monday will be even more hectic at the Capitol as gun rights activists and lobbyists ascend upon Richmond.

Since November when Democrats gained control of the General Assembly, gun control measures have been a pressing topic across the state.

Many localities across the Commonwealth have voted to become "Second Amendment Sanctuary Cities," which means that the city or county would oppose any law that would unconstitutionally restrict the rights of citizens under the Second Amendment of the U.S. Constitution.

Both Governor Ralph Northam and Attorney General Mark Herring said the Second Amendment Sanctuaries don't hold much weight. Herring said in an advisory opinion that they have "no legal effect."

Herring released the following statement about the passage of these several bills:

“Virginians have been calling for commonsense gun safety laws for far too long and today we have taken the first steps to finally make our communities safer. The passage of a one-gun-a-month law and a red flag law are substantial steps towards keeping firearms out of the hands of dangerous individuals and preventing gun violence in the Commonwealth. While I am disappointed that a weakened version of the universal background checks bill passed this morning, it is my hope that we will pass full universal background checks before this session is over.

Additionally, I am pleased that the Senate Courts of Justice Committee passed the bill that would allow localities to prohibit firearms at permitted events. I have been introducing this legislation since the tragic events in Charlottesville in 2017 but, unfortunately, every year Republican-held committees failed to pass it. Allowing localities to restrict the use of firearms at permitted events will make participants, bystanders, communities and law enforcement agencies safer.”