Va. Congressman Scott Taylor: 'I am an independent thinker'

WASHINGTON (WVEC) -- One of the first things you notice about Congressman Scott Taylor of Virginia Beach is he's a people person. 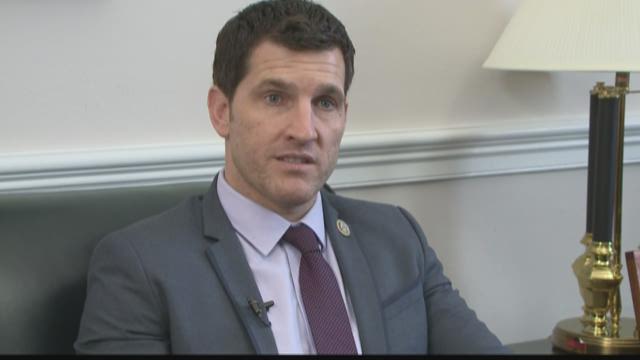 WASHINGTON (WVEC) -- One of the first things you notice about Congressman Scott Taylor of Virginia Beach is he's a people person.

More than 100 days into the freshman congressman's term in office, the former Virginia State Delegate and his team are very effective at getting his message in the spotlight. Taylor appears in local and national media several times a week.

The former Navy Seal, who has a Bachelor of Arts degree in International Relations at Harvard Extension School, beat popular Republican Randy Forbes.

Scott Taylor greets a friend in his Washington office.

He parted with Trump when the President proposed cuts to Chesapeake Bay conservation.

"The Chesapeake Bay is not only a local economic driver, it's a national asset," Taylor explained.

He doesn't hesitate to say he wishes the President would be more careful with his words and rein in his use of Twitter.

Even with his differences with the President, Taylor gives the Commander in Chief a grade of 'B' on his job performance so far.

An understandably high grade when you consider he's voted with Trump's views 100 percent of the time according to opinion poll and political analysis website FiveThirtyEight.

But Taylor doesn't have his own agenda.

CNU political analyst Quentin Kidd describes him as a politician who's jumped into the political pool with both feet.

"Among the 11 members of Congress that represent Virginia, Scott Taylor is probably most aware of the political winds and which way they are blowing," says Kidd.

Taylor is a member of the House Appropriations committee, the only freshman member of Congress appointed to an 'A' committee.

The issue he's adopting as his top priority is building a strong national defense.

"Military is a big issue but at the same time I would lump veterans in with that too," said Taylor.

That's why Taylor says he is working to secure funding for a larger Veterans' medical facility in Virginia Beach to better serve Southside Hampton Roads. The VA hospital is located in Hampton.

Taylor also sponsored legislation that makes it against federal law to discriminate against members of the LGBT community when renting or selling housing.

"The LGBT bill to me falls under economic issues and human rights, it's protecting a vulnerable class, I think it's important to do that," said Taylor.

Taylor mentions the word "vulnerable" because it's a word with which he can identify.

He grew up on Maryland's Eastern Shore, raised by a single mother and started working on a farm at the age of 11.

When asked who in Congress is helping him the most to get acclimated to his new position, without hesitation he mentions House Majority Leader, Kevin McCarthy.

McCarthy returns the praise in a statement he issued to 13News Now:

"Scott is a patriot whose life experiences inspire his colleagues in Congress every day. His life as a doer and a leader have clearly informed his approach in Congress. He has made an immediate mark with thoughtful engagement on the military and homeland security funding challenges facing our country, and the Hampton Roads region in particular."