VIDEO: Group chants 'We are watching you' outside Arizona Secretary of State Katie Hobbs' home

Video obtained by 12 News shows a group chanting outside Hobbs' home. Law enforcement is already investigating a death threat made against her on social media. 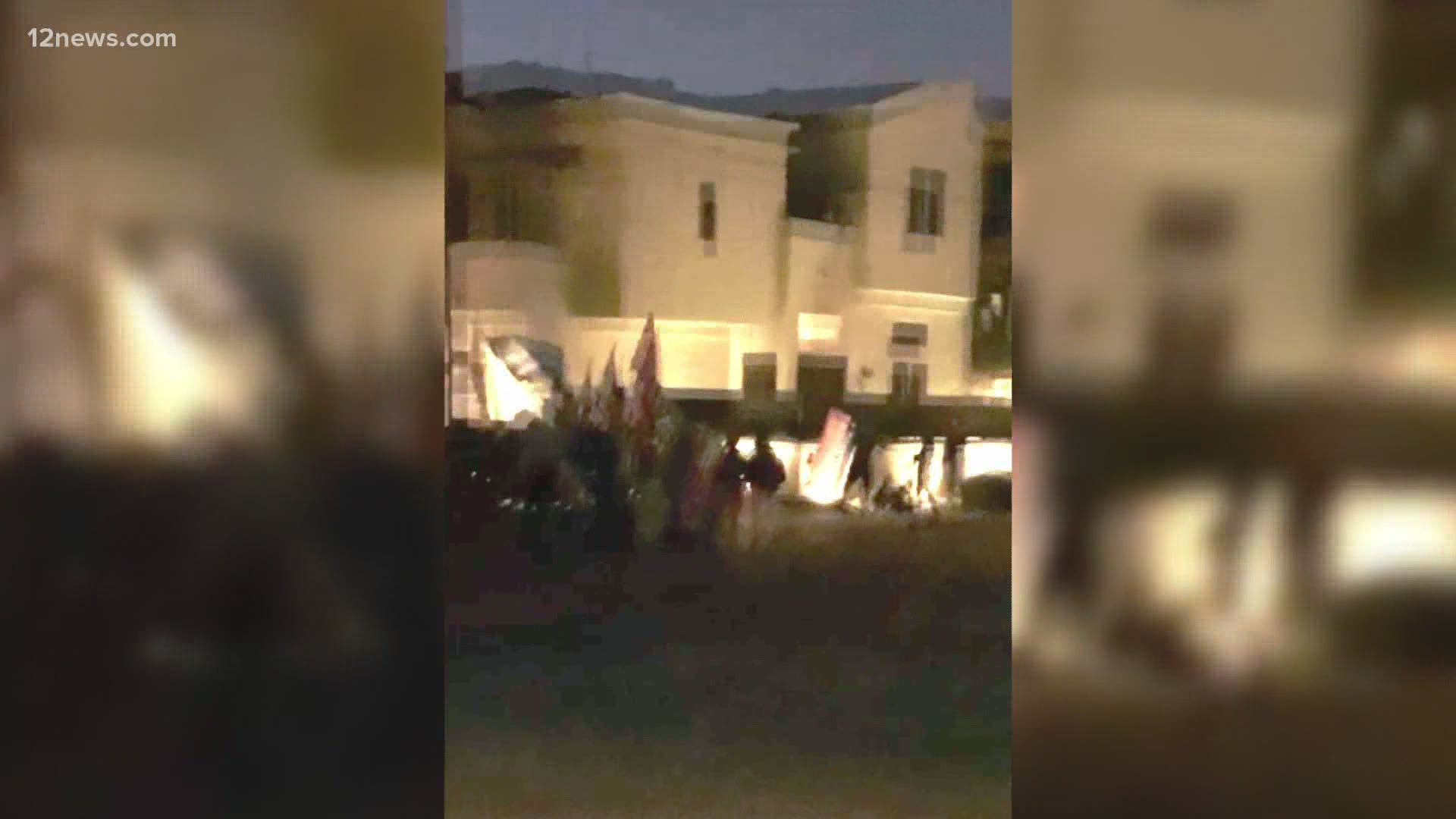 PHOENIX — New video obtained by 12 News shows a group outside of Arizona Secretary of State Katie Hobbs' home chanting "We are watching you."

The video was sent from a neighbor to 12 News anonymously, and Hobbs confirmed the validity of the video to Team 12's Brahm Resnik on Wednesday.

Hobbs, a Democrat and Arizona's top elections official, has been the subject of multiple threats since the election.

12 News reached out to the Phoenix Police Department, which said officers responded to the residence around 6:15 p.m. on Tuesday night for reports of the disturbance. But when officers arrived, police say the group was no longer there and no arrests were made.

On Wednesday, Hobbs released a statement on the ongoing threats of violence against her and her family.

Arizona Secretary of State Katie Hobbs released this statement in response to ongoing and escalating threats of violence directed at her family and her office. pic.twitter.com/SzsRxzvOl1

Hobbs says she is calling on other leaders in the state, including Arizona Gov. Doug Ducey, to "stand up for truth."

On Wednesday afternoon, Ducey held a press conference related to coronavirus in Arizona and when asked, denounced threats against Hobbs and her family.

Ducey also said his office is working with Hobbs regarding potential Arizona Department of Safety resources needed for her protection.

Ducey adds his office is working with Hobbs' office on any @Arizona_DPS resources needed for her protection.

Hobbs said the threat was made on Parler, a social media site that’s become a haven for conservatives and extremist views.

“The threat was something like, ‘Let’s burn her house down and kill her and her family, and teach these fraudsters a lesson,’” Hobbs said.

Hobbs’ home address and personal information, as well as her son’s cell phone number, were also posted on Parler, she said.

“When someone ‘doxxes’ you, there’s the fear they can mess with your credit,” Hobbs said. “So I’ve had to put credit freezes on me and all my family members.”

“President Trump has made it abundantly clear he's more interested in pandering to his Neo-Nazi base than being president for all Americans," the tweet read.

Hobbs wrote the post after a woman was killed in August 2017 in Charlottesville, Virginia, at a rally by white supremacists.

”I stand by the tweet,” Hobbs said. “I was not targeting every single Trump supporter. It was clearly geared toward people who supported the actions at this rally.”

The result has been a state office under siege on social media and on its phone lines by "nasty, abusive callers." Lines are being rerouted and comment spaces are being shut down.

“It’s coming in too fast and furious to monitor,” Hobbs said.

The ultimate blame for the threat, Hobbs said, lies with elected officials.

“There are high-profile elected officials in the state of Arizona who continue to fuel these baseless conspiracy theories and call into question the integrity of the election,” Hobbs said.

“They won’t stop, and this is the consequence of that.”

The party issued this statement: “The Republican Party of Arizona condemns in the strongest possible terms any and all threats of violence.”

Department of Public Safety spokesman Bart Graves said via email that the agency was often assigned to investigate threats made to elected state officials.

"Due to the sensitive nature of these investigations, the department cannot provide details until the investigation has been concluded," Graves said.

Ducey’s chief of staff, Daniel Scarpinato, told 12 News that Ducey was aware of the threat.

“We don’t condone threats against any elected officials and would provide any and all resources that are needed to ensure the secretary .. and her family are safe and protected,” Scarpinato said.

Track all of our current updates with Arizona politics on our 12 News YouTube channel. Subscribe for updates on all of our new uploads.