Three-quarters of the United States is needed to pass the gender equality measure. Virginia could push the amendment's ratification effort over the edge. 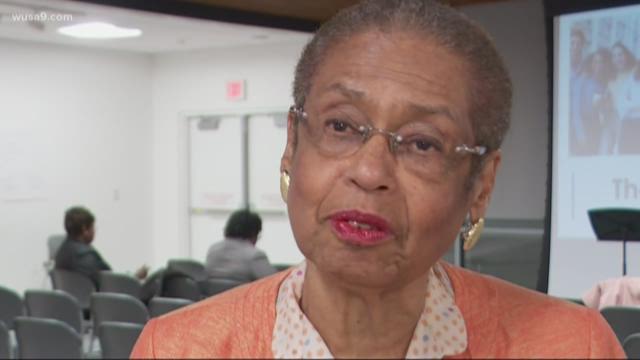 The Virginia state legislature could make history if it decides to vote on the Equal Rights Amendment in 2020.

The approval of thirty-eight states is needed to ratify the amendment across the nation. If Virginia state lawmakers decide to approve the measure in the Commonwealth next year, the amendment could finally be ratified.

Democrats now hold every statewide office in Virginia following Tuesday's election. Members of the party have previously made promises to approve the amendment.

The measure failed following a vote in February in the Virginia statehouse.

The Equal Rights Amendment seeks to end certain legal distinctions between the sexes in property, employment and other issues.

Credit: AP
FILE - In this Aug. 26, 1980 file photo, Bella Abzug, center with hat, smiles as she holds up her ERA sign in a pro-equal rights demonstration on New York's Fifth Avenue. About 5,000 marchers marched down Fifth Avenue chanting pro-equal rights slogans to celebrate the 60th anniversary of women receiving the right to vote. (AP Photo/File)

She said she was encouraged about the amendment's prospects after the Democrats' victory in Richmond on Tuesday.

"That could be the next state," Norton said of Virginia. "They did not sign on the last time. The equal rights amendment is alive and kicking. We're going to pick up some dust."

Norton was the chair of the Equal Employment Opportunity Commission in the late 1970s. She said the Equal Rights Amendment would afford women the equality they have long deserved.

"It's important because women are not found across the board in all of our occupations and in all of our opportunities," she said. "The equal rights amendment would help, very much it seems to me, to alert those who would then understand how important half the population is to the United States."