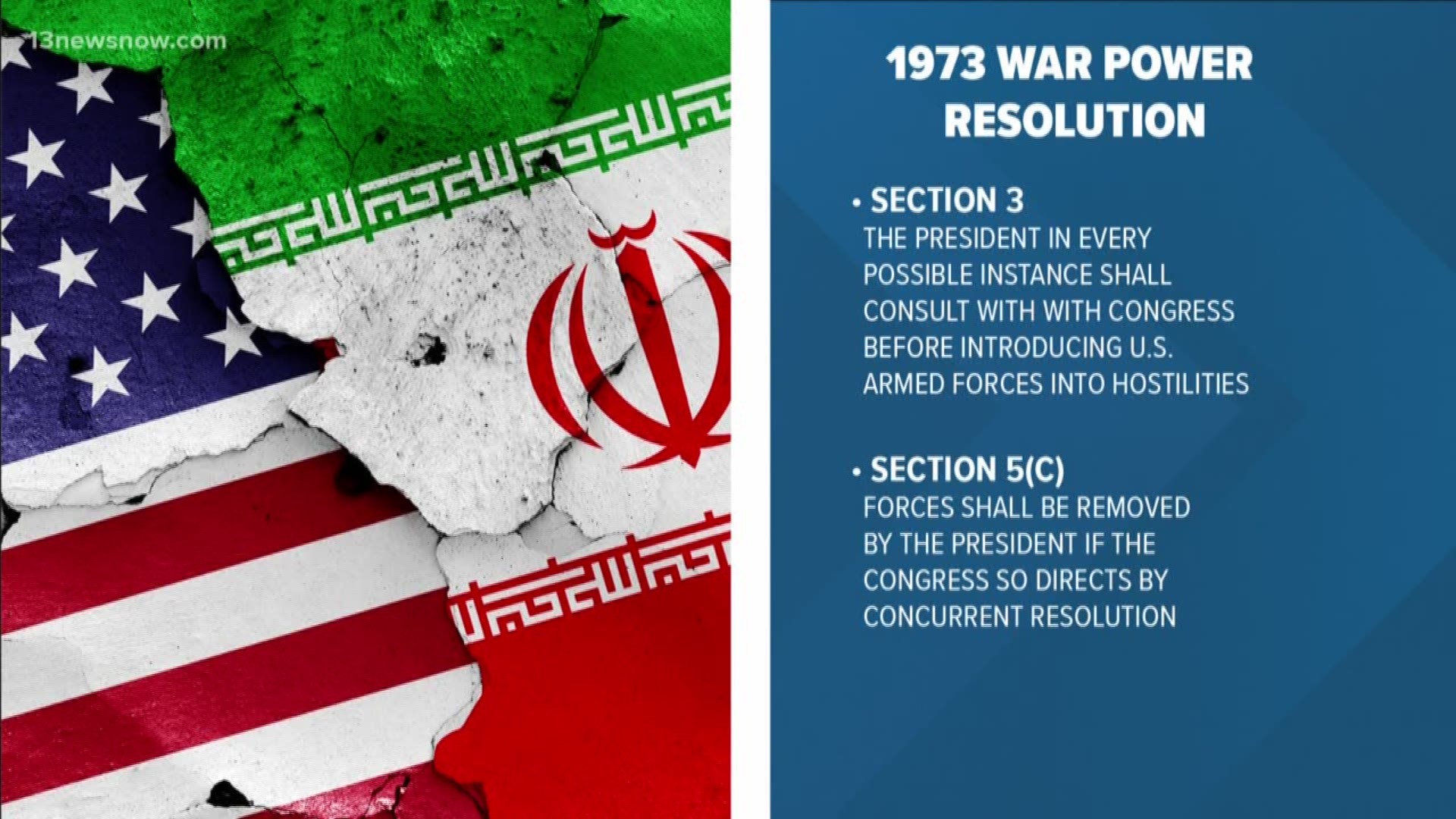 WASHINGTON — The U.S. House passed a resolution on Thursday to limit President Donald Trump’s ability to take military action against Iran. There is a similar proposal in the Senate made by Senator Tim Kaine.

Republicans in the Senate are unlikely to approve the measure.

The measure is a special type of resolution that doesn’t get the president’s signature, and the two parties disagree over whether it would have the force of law even if it does pass Congress.

Indications are there were no U.S. casualties. A few hours after the attack, President Donald Trump addressed the situation on Twitter, saying "All is well!"

Virginia congress members responded to the US House vote passing the resolution.

“Under the Constitution, only Congress has the authority and power to declare war, a responsibility I take seriously,” Congresswoman Elaine Luria said. “However, this resolution does not solve the larger problem at hand—which is that we are operating under a nearly two decade-old Authorization for the Use of Military Force (AUMF). I voted against this resolution because if we must commit our forces to sustained combat operations to protect our nation, Congress has the duty to take on the more urgent task of debating a new AUMF.”

Congressman A. Donald McEachin on Thursday also released a statement:

“The president’s briefing yesterday left more questions than answers, but made one thing crystal clear - he has no plan to keep the American people safe, achieve de-escalation with Iran or ensure stability in the region.

The decision to use military force is one of Congress’ greatest responsibilities, and the American people deserve careful consideration and thoughtful decision-making before deciding to take our nation into armed conflict. The War Powers Resolution my colleagues and I passed today, in keeping with Congress’ long-established oversight responsibilities, mandates that if the president wants take us to war, he must get authorization from Congress.

Sacrifices made by American servicemembers and their families are too costly to act without the highest level of safety, security, and consideration. The American people, especially our servicemembers, military families, and diplomats, deserve better.”

For the first time since news broke about Iran, Congressman Rob Wittman, Ranking Member of the Seapower and Projection Forces Subcommittee, released this statement on Iran:

“Last week, President Trump took action to eliminate a brutal terrorist and protect the American people. Make no mistake, Qasem Soleimani was a known enemy of the United States who believed himself and his heinous deeds beyond reproach--this is no longer the case. I agree with President Trump, additional sanctions are necessary to ensure Iran does not build up its nuclear arsenal nor continue to sponsor terrorist activity. I also agree that we must solicit the support of NATO in order to apply additional pressure on Iran. The United States seeks peace and will continue to work with the Iranian people to achieve that. I offer my full support to the president and as the situation progresses, I will continue to steadfastly support our men and women in uniform and do everything in my power to make sure they have the resources they need should conflict begin.”

This article will be updated as more statements are made.