Republican Dan Bishop won 51% of the vote against democratic Dan McCready. Bishop thanked Donald Trump, who held a rally for him Tuesday.

CHARLOTTE, N.C. — Republican Dan Bishop has won the special election for North Carolina Congressional District 9 against democrat Dan McCready. Bishop has claimed 51% of the vote against McCready's 49% of the vote.

The 55-year-old Bishop is a state senator best known for sponsoring a 2016 state law that blocked local anti-discrimination rules protecting LGBT residents. The law was repealed after it prompted a national outcry and boycotts that The Associated Press estimated cost North Carolina $3.7 billion.

Bishop didn't run in last year's election, which was scrapped after allegations of ballot tampering by a Republican political consultant.

Millions of campaign dollars have been spent in the south-central 9th district race between Republican Dan Bishop and Democrat Dan McCready. The election do-over was ordered after evidence of ballot fraud last fall that appeared to benefit McCready's then-GOP opponent.

At a rally in Fayetteville on Monday night, Trump campaigned for conservative state Sen. Dan Bishop. Opposing Bishop is moderate Democrat Dan McCready, a former Marine who narrowly trailed in an election for the seat last year that was invalidated after evidence of election fraud surfaced.

More than half the district's votes likely came from Charlotte's suburbs. When Democrats retook the House in 2018, many of their pickups were in suburbs.

One voter says he's fed up with the Republican Party and frightened by President Donald Trump. Another voter says she doesn't want to see the country become a socialist nation.

Those are just two of the diverging viewpoints at the polls in North Carolina on Tuesday for a special congressional election.

Another Mint Hill retiree, Bob Southern, said he voted for McCready because he's fed up with the Republican Party's agenda and President Trump. 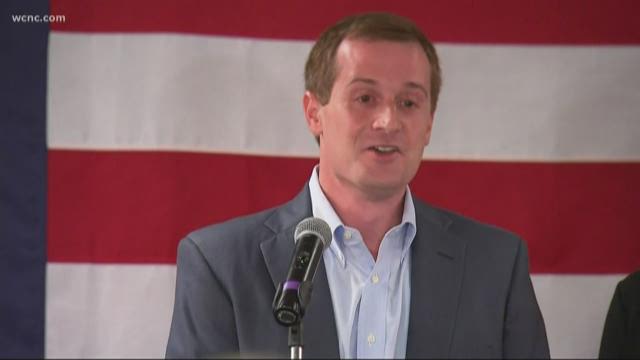 North Carolina election officials are not acting on a request by the state Republican Party to extend hours at a single precinct in the special election for the country's last undecided congressional seat.

The Republican Party on Tuesday asked that the voting site stay open an extra hour and 45 minutes because they said some 9th Congressional District voters were showing up at the old voting location in Union County, a Republican-heavy area east of Charlotte.

The State Board of Elections met and discussed the GOP request, but took no action.

Union County is seen as critical in the election prospects of Republican Dan Bishop, who is seeking to extend the GOP's 56-year hold on North Carolina's 9th Congressional District. He's running against Democrat Dan McCready and two other candidates.

A request to extend voting in one Mint Hill precinct in Mecklenburg County was approved. The location was closed for approximately 25 minutes Tuesday evening because of a gas leak.

OTHER STORIES ON WCNC

RELATED: Early voting in 9th District extended for those affected by Hurricane Dorian