Florida lawmakers think they have the secret to a 'healthy marriage'

A proposed law would create a Florida Guide to a Healthy Marriage which must be available to anyone seeking a marriage license. 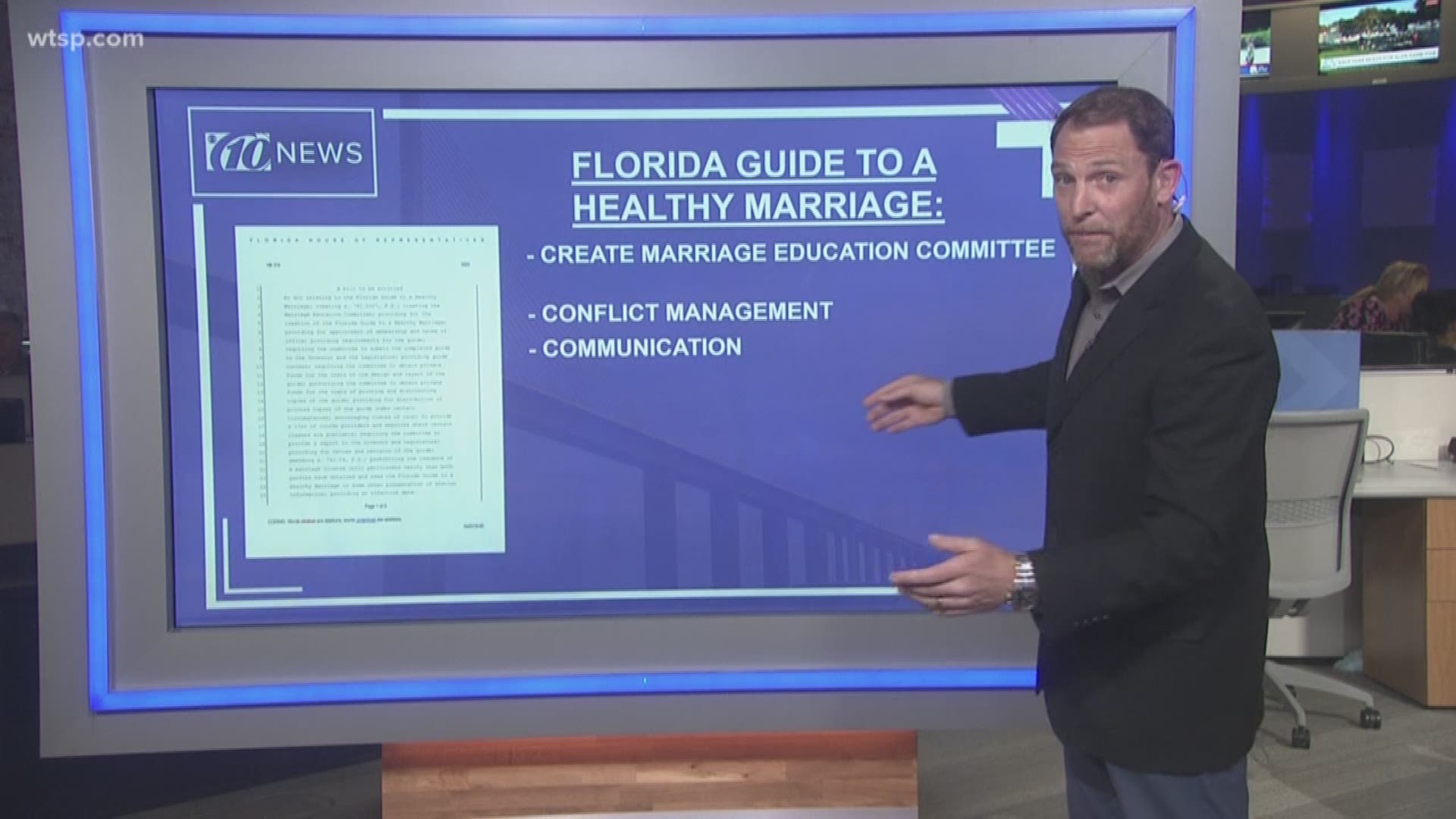 ST. PETERSBURG, Fla. — Florida lawmakers think they have the secret to keeping your marriage healthy.

Rep. Clay Yarborough, a Republican state legislator out of Jacksonville, filed the Florida Guide to a Healthy Marriage bill Wednesday for the upcoming 2020 legislative session. The 38-year-old Representative filed a similar bill two years ago which died in committee.

Under the proposed law, Floridians would be required to provide documentation that they read or otherwise accessed the information contained in the Florida Guide to a Healthy Marriage before they are issued a marriage license.

According to the bill, the guide would include: (a) resources regarding conflict management, communication skills, family expectations, financial responsibilities & management, domestic violence resources and parenting responsibilities; (b) current info from marriage education and family advocates to assist in forming and maintaining and long-term marital relationship; (c) info regarding premarital education, marriage enrichment education and resources that are available to help restore a marriage that is potentially moving toward dissolution; (d) contact info and website links to additional resources and local professional and community services to further assist a marital relationship.

Rep. Yarborough sent us this statement:

“Promoting healthy marriages and families in Florida should be a priority for all of us and is in the public interest for the betterment of our state,” Yarborough said in an email to 10News. “Not all bills make it through the process the first year they are filed. We will try hard this coming session and hopefully get it passed.”

“In 2018, half of Florida’s 156,168 marriages were dissolved through divorce or annulment (77,054),” Yarborough added. “According to a national study performed by the New York-based Institute for American Values, Florida taxpayers spend $1.9 billion annually due to family fragmentation as a result of divorce and unwed child-bearing. The cost to Florida’s child welfare system alone is estimated at $181 million. Also, in 2018 alone, in 46% of the dissolutions, at least one minor child was affected.”

RELATED: Woman swallowed engagement ring while dreaming about her fiancé

RELATED: Wedding venue says it's against its beliefs to host interracial wedding