The assault, which ended when a sheriff’s deputy killed the attacker, was the second fatal shooting at a U.S. Navy base this week. 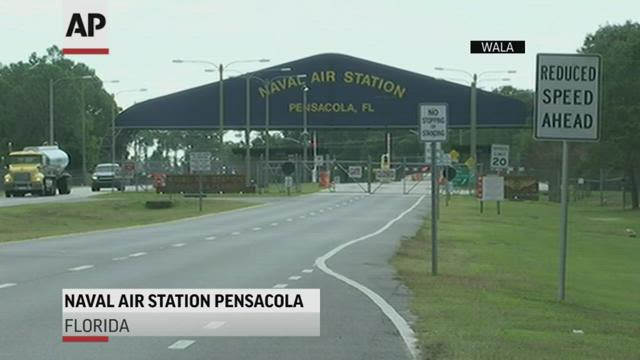 An aviation student from Saudi Arabia opened fire in a classroom at the Naval Air Station Pensacola on Friday morning, killing three people in an attack the Saudi government quickly condemned and that U.S. officials were investigating for possible links to terrorism.

The assault, which ended when a sheriff’s deputy killed the attacker, was the second deadly shooting at a U.S. Navy base this week and prompted a massive law enforcement response and base lockdown.

Twelve people were hurt in the attack, including the two sheriff’s deputies who were the first to respond, Escambia County Sheriff David Morgan said. One of the deputies was shot in the arm and the other in the knee, and both were expected to recover, he said.

The suspect was a member of the Saudi Air Force and an aviation student at the base, officials confirmed at a press conference Friday. He was identified as Mohammed Saeed Alshamrani by the FBI Saturday night.

"I think there's obviously going to be a lot of questions about this individual being a foreign national, being a part of the Saudi Air Force — to be here training on our soil — to do this," Florida Governor Ron DeSantis said at the press conference. "The FBI is working with DOD … to answer those questions."

"One of the things that I talked to the president about is ... the government of Saudi Arabia needs to make things better for these victims," DeSantis said. "And I think that they're going to owe a debt here given that this was one of their individuals."

The shooter opened fire with a handgun in a classroom building on Friday morning. The base commander said weapons are not allowed to be carried around on the base, which will remain closed for the rest of the day. Only essential personnel will be allowed in.

He says the FBI is coordinating with the U.S. Department of Defense and other agencies to conduct a complete investigation.

During a news conference, Capt. Tim Kinsella Jr., speaking on behalf of the base as its commanding officer, said a call came in around 6:30 a.m. Friday about an active shooter. The shooting happened inside one of the classroom buildings and was contained to that building.

Kinsella said they do not want to talk about the shooter at this time.

“(My) heart goes out to those this impacts...they are a part of our Naval family,” Kinsella said during a news conference.

Escambia County Sheriff David Morgan said they got a call from the base around 6:51 a.m. for an active shooter.

Morgan said two deputies engaged the shooter when units arrived at the base. One of them shot and killed the shooter.

The two deputies who engaged the shooter were both shot -- one in the arm and one in the knee. Both are expected to be OK.

The sheriff’s office said there is no reason to believe there are additional shooters.

Morgan described the scene, “like being on the set of the movie,” with shell casings and injured people located throughout a two story classroom building on base.

“This doesn’t happen in Escambia, but it did,” Morgan said.

The mayor of Pensacola, Grover Robinson IV, also spoke during the news conference, calling it “a tragic day for the city of Pensacola.”

Robinson said the city is a military town and the base has been there for 200 years.

The mayor also asked people who don’t have business in the area to stay away from the base.

Rep. Matt Gaetz, who represents the district that includes Pensacola and the base, asked for the public to "please pray for our military service members, law enforcement, and other first responders as they work to address the situation."

The White House also tweeted the President Donald Trump and his staff have been briefed on the shooting at the Naval base.

Second shooting at a military base this week

This shooting Friday morning in Pensacola was the second deadly shooting at a U.S. Navy base in the last week.

Gunshots rang out at Joint Base Pearl Harbor-Hickam just outside Honolulu Wednesday afternoon. A military official says a sailor used his service weapons to kill two civilian workers and then himself.

The Florida naval base, known as NASP, is referred to as "The cradle of Naval aviation," according to military.com.

The facility is known for its training fields and programs which are used to train all branches of the military, the Coast Guard, other agencies and foreign allies, according to the air station's website.

RELATED: Active shooter killed on Pensacola's Naval Base, home of the Blue Angels

Established as the first Naval Air Station commissioned by the U.S. Navy in 1914, NASP graduates nearly 60,000 students a year from its training program. It employs more than 16,000 military personnel and 7,400 civilian personnel.

The base is the home of the Education and Training headquarters and staff of the Naval Command. It has 10 different training programs and is probably best known as the home of the Blue Angels Flight Demonstration Squadron.

Jason Bortz, a spokesperson for NAS Pensacola, said the base is a training center for all branches of the military. He did not say if the shooter was a member of the Navy or some other branch.