The story behind the 'Frying Pan Tower' off North Carolina's coast

The structure has been out there in the Atlantic Ocean for decades, but now, it's most famously known for its live stream of powerful hurricane conditions. 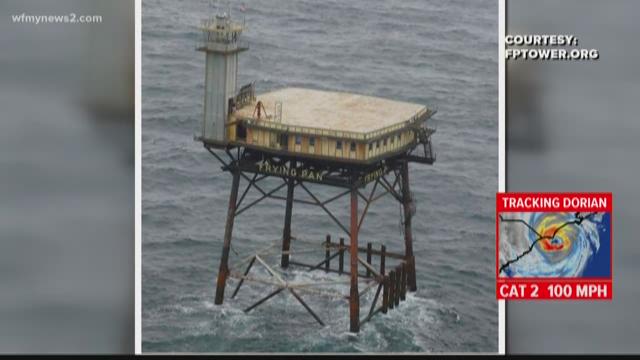 Despite wild conditions from Hurricane Dorian along the North Carolina coast, conditions have been fairly calm in the Triad.

However, even hundreds of miles away, many are glued to live streams on social media - showing the current conditions. One of those streams shows the Frying Pan Tower - a structure miles off the North Carolina coast.

The tower cam shows Old Glory, holding on tight as the winds whip by, and the ocean waves grow more intense by the minute.

We wanted to know the story behind all this - so WFMY News 2 went to the source: Richard Neal, one of the co-owners.

He says, back in the 1950's and 60's, before the days of GPS, the towers warned sailors away from dangerous shoals. Back then, there were about a dozen, but now, the Frying Pan is one of three remaining structures like it in the Atlantic Ocean.

"The tower is special because it's been out there a long time, and people are trying to restore it so we can increase our knowledge about what is going on out in the middle of the ocean," Neal explained.

What's happening now: Hurricane Dorian. Neal is not currently on it, but he has been before - for Hurricanes Sandy, Arthur, and Matthew.

"It is terrifyingly beautiful if you can imagine," he said, "You can actually see just mountains of water rolling past, so, it's awesome."

No matter the conditions outside the focus of the shot remains the American flag. Neal says this shows pride.

"There's actually a whole set of guidelines and rules, but what we found out in polling and talking to the veterans is that they prefer to leave it up and standing proud as a symbol of what we go through in America," he said.

After Hurricane Florence the flag flying at the tower was retired, and auctioned off.Neal says, proceeds from that went right back to helping the victims of Florence. The same will happen with this flag, when the team gets back to the Frying Pan next week.

RELATED: American Flag Shredded on Frying Pan Tower During Florence to Be Auctioned

RELATED: Hurricane death toll in Bahamas at 30 as aid begins to land