Christopher Rapp, one of the 12 victims killed on Friday, shared a love and passion for playing the bagpipes. 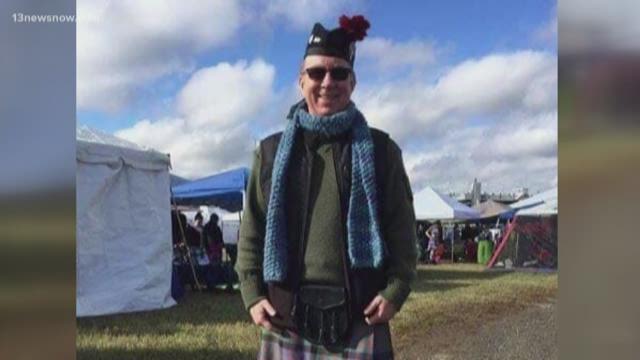 VIRGINIA BEACH, Va. — One of the victims in Friday's mass shooting was new to Virginia Beach.
He loved music and played a challenging instrument.

Christopher Kelly Rapp was one of 12 people killed on Friday in the shooting at the Virginia Beach Municipal Building.

He started working as an engineer in Public Works just 11 months ago.

But as a new face to Virginia Beach, he quickly established a bond with Tidewater Pipes and Drums.

"It is certainly a community, it's family outside of family fraternity, sorority, all of the above," said Pipe Major Christopher Pearcy.

Rapp had a passion for playing difficult instruments and right after he moved to the area, he reached out to the band to get involved.

"He was just always really happy to be with the band at practice or coming out to events," Pearcy recalled.

From practices to performances, Pearcy remembered his bandmate as the light of the group.

"One of the best ways I like to describe Chris is kind of a quieter version of Fred Rogers. Always had a smile on his face, a very positive person never complained about anything."

But now it is hard to forget the day that took him.

Three bandmates, including Rapp, worked in the municipal building. On Friday, members texted one another, doing a buddy check to make sure everyone was OK.

But they never heard from Rapp.

Pearcy said, "Everyone was going around saying, 'I haven't heard from Chris. How can I get ahold of Chris?' And I remember I was up most of the night waiting to hear something and I think past the 11 o'clock hour, I finally heard from his wife that he had passed away. It's surreal. It's unbelievable. It's really all the above."

And as he keeps moving forward, Pearcy will hold onto Rapp's contagious smile forever.

The pipe major said they've had an outpouring of support from other pipe bands across the country, and the band members will be there for Rapp's family through this difficult time.