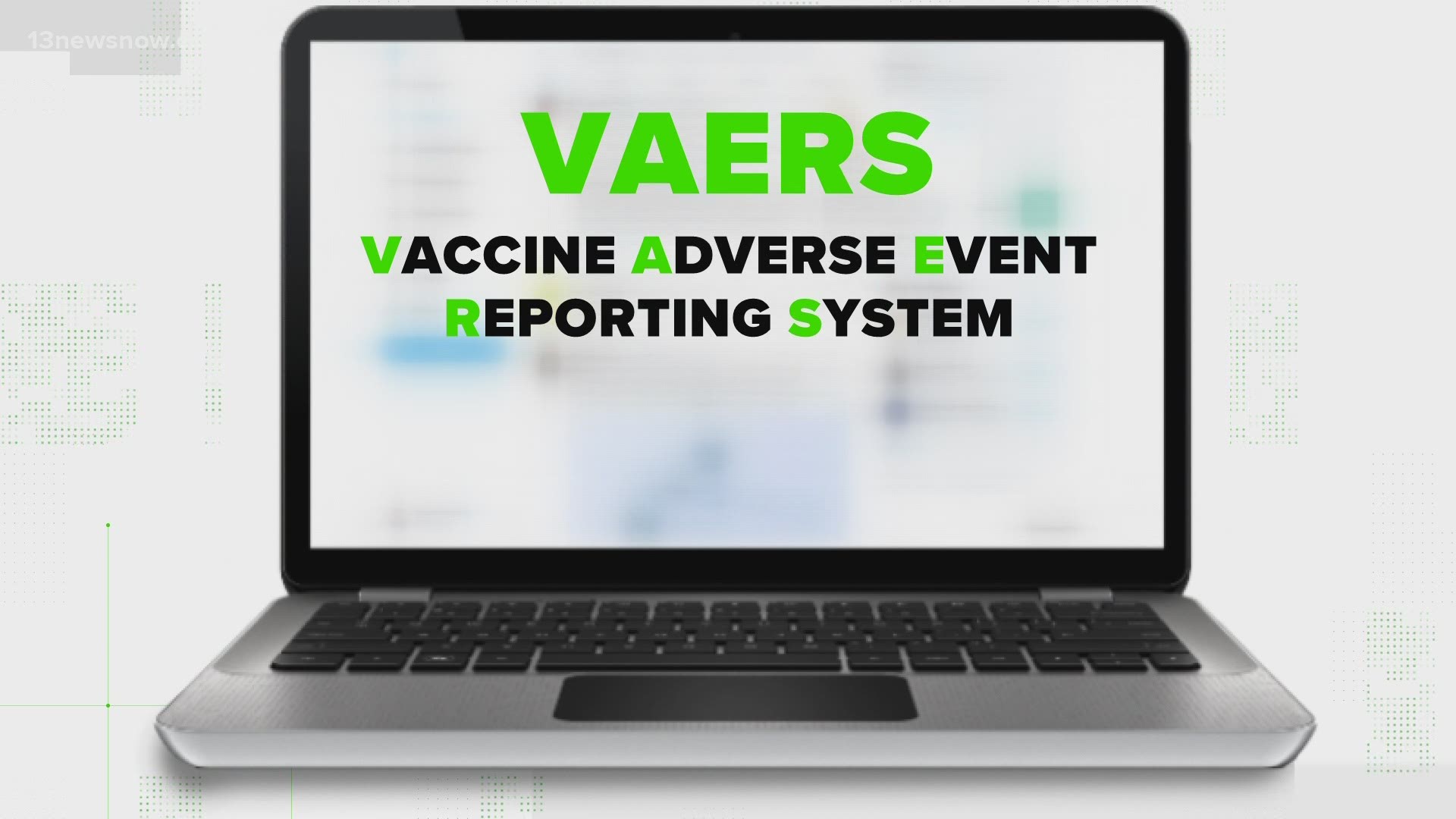 WASHINGTON — For more than 30 years, the CDC and FDA have leveraged a powerful tool called the "Vaccine Adverse Reporting System," known simply as "VAERS."

Since 1990, the system has been used to help record potential side effects for licensed vaccines in the United States. Health care professionals and vaccine manufacturers are required to report what's called "adverse events," but it's available to everyone.

Recently, some people online are posting about all sorts of severe side effects --  including deaths and miscarriages being linked to the COVID-19 vaccines and citing VAERS as their source.

Our Verify researchers looked into what the VAERS system is designed to do, and what, if any, conclusions the public can draw simply by looking at VAERS.

Every Friday, VAERS makes public all vaccine injury reports received by the system as of Friday of the previous week. The 34,444 adverse events reported between Dec. 14, 2020, and March 11 include 1,739 deaths and 6,286 serious injuries.

Liberals constantly tell us the COVID vaccines are safe.

When I ask them if they have seen data from the CDC's VAERS, they say: "what's that?"

In other words, they don't know what they're talking about.

QUESTION: What is the VAERS data base, and what can it tell us?

ANSWER: VAERS is a publicly accessible reporting and monitoring system co-operated by the CDC and FDA. It's designed to help researchers evaluate reports of side effects and detect early patterns of "new, unusual, or rare adverse events" that require deeper investigation to confirm.

Our Verify researchers spoke with Dr. Arnold Monto and Dr. Kawsar Talaat, who are both vaccine experts, and looked at guidance on the VAERS website.

She explained that the system, a collaboration between the CDC and the FDA, has some major shortcomings.

Currently, more than 164 million people have received one of both shots, according to the CDC.

As of March 26, when the latest data was processed, there were 233,394 reports in VAERS, including 1,785 reports of death and 66 reports of "abortion spontaneous," commonly called miscarriages.

While it might appear alarming, our experts emphasize that just because something is reported doesn't mean it’s connected to the vaccine.

"So what I call the VAERS system is cries of alarm," Dr. Monto said. "It doesn't mean that what is seen is actually related to the vaccine, it happened after a vaccine is received. The follow-up then is to do a study to...find out if this event was actually related to vaccines."

Dr. Monto gave the example of someone who has a heart attack two days after getting the vaccine but would have had it anyway regardless of vaccination.

"When you see numbers from VAERS, they are following vaccination, but not necessarily caused by vaccination."

The FDA actually requires that vaccination providers report any death after a COVID shot to VAERS.

The CDC says that they follow up on any report of death to learn more about what happened, and says that "to date, VAERS has not detected patterns in cause of death that would indicate a safety problem with COVID-19 vaccines."

"Over 145 million doses of COVID-19 vaccines were administered in the United States from December 14, 2020, through March 29, 2021. During this time, VAERS received 2,509 reports of death (0.0017%) among people who received a COVID-19 vaccine. CDC and FDA physicians review each case report of death as soon as notified and CDC requests medical records to further assess reports. A review of available clinical information including death certificates, autopsy, and medical records revealed no evidence that vaccination contributed to patient deaths. CDC and FDA will continue to investigate reports of adverse events, including deaths, reported to VAERS. "

When it comes to the general public, Dr. Talaat said, “you can’t draw any conclusions by looking at VAERS." 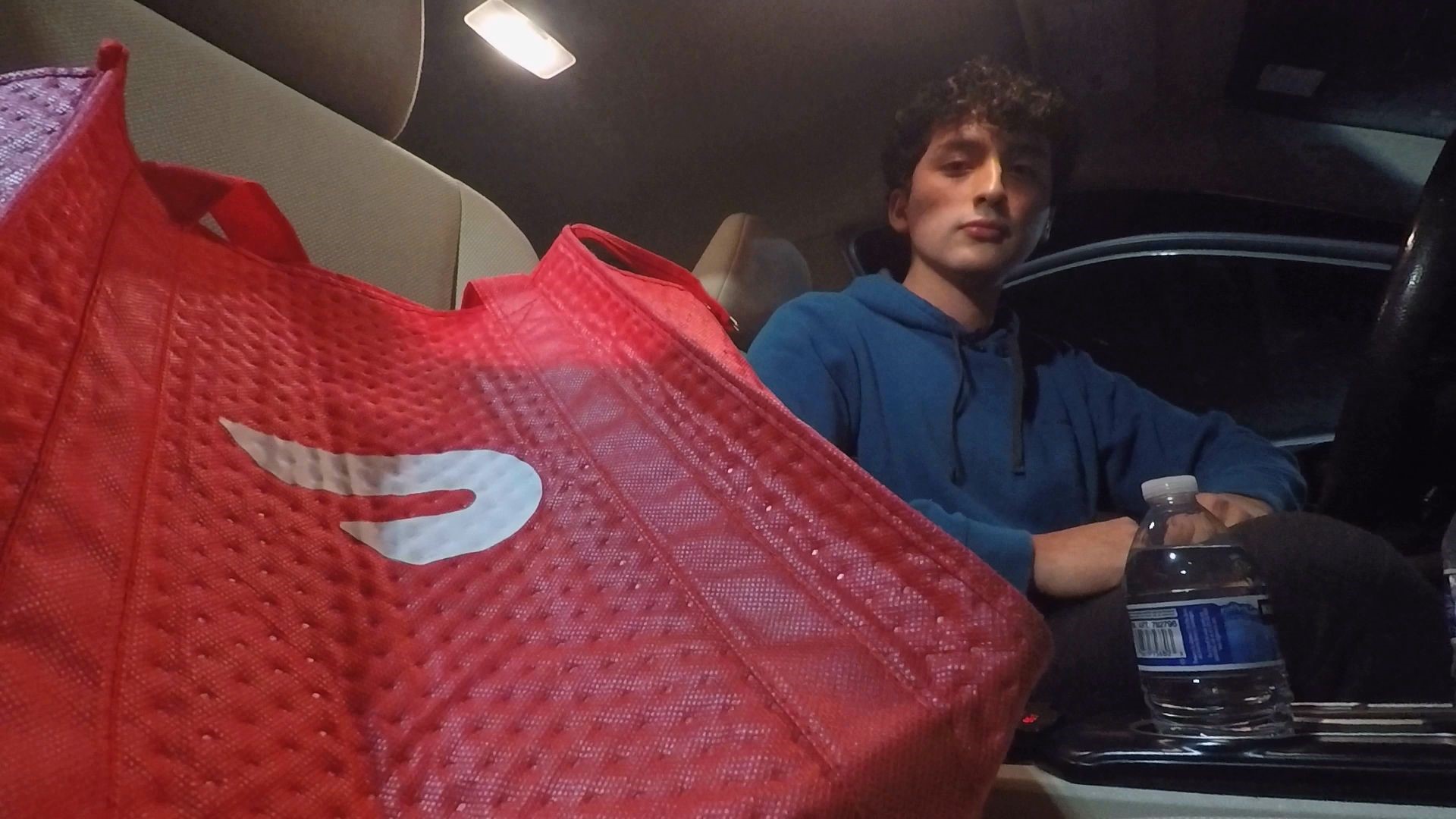 She explained that VAERS is all about creating "signals." What it doesn't do is tell you whether you would see these side effects in an unvaccinated population.

"What you need to do is look at a large population, see how many things how many of those events, deaths or miscarriages, we're seeing in the vaccinated group and compare them to a non-vaccinated group, and the tool to use for that is something like the Vaccine Safety Datalink, which monitors large numbers of anonymous data," Talaat said. "VAERS doesn't have that kind of information, so you can't draw any conclusions from it."

Finally, before even being able to access VAERS data, you need to read and accept this disclaimer, which reads in part, "VAERS reports alone cannot be used to determine if a vaccine caused or contributed to an adverse event or illness. The reports may contain information that is incomplete, inaccurate, coincidental, or unverifiable."

So we can Verify: posting stats from VAERS without context is misleading.