VERIFY: Yes, Census workers are address canvassing in neighborhoods. Here's how to know they're the real deal

Knock-knock! Between now and October 18, a Census Bureau employee that needs to verify your address might arrive at your door. 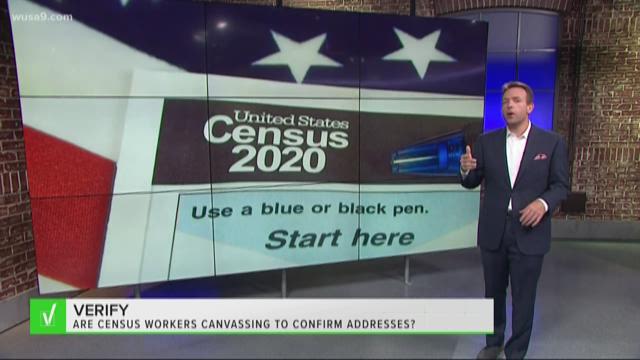 Yes, the Census Bureau confirmed agents are conducting a process called address canvassing that in August 4 continuing through October 18.

The Verify team is here to answer all questions you have related to the upcoming 2020 Census.

A viewer said a man showed up at his front door claiming to be from the Census and asked him to confirm his address.

He wants to know, is this legit? Are census workers starting to pay visits to people's homes?

Our researchers reached out to the Census Bureau for answers.

Since the 1970s, the Census Bureau has completed a count of every person living in the US and its territories by literally walking around on every single road and every single block. In 2010, it was 11.2 million blocks, or 67 million miles traveled.

This time around, the agency is using satellite technology and mapping tools to count addresses.

Credit: AP
In this undated image provided by the U.S. Census Bureau, shows census geographers at census headquarters in Suitland, Md., using the Block Assessment, Research and Classification Application (BARC) to help get an accurate population count next year. Census employees are taking images captured from satellites and planes to verify addresses in rural communities and compare them to previous maps from 2010. (U.S. Census Bureau via AP)

So far, they have verified 70 percent of the addresses in the country without anyone leaving the office.

But for the remaining 30 percent of addresses, workers must hit the streets to get confirmation.

So yes, census workers are address canvassing across the U.S. to ensure the Census Bureau list is accurate and completed ahead of the 2020 Census.

But is there a way to know if the person at your door a legit Census staff member?

The Bureau said all its agents carry special ID’s and badges, Census logo branded brief cases and official laptops with 2020 Census logo on it.

Workers should introduce themselves as Census bureau employees and you can also ask to see a second form of identification.

If you’re still unsure about their identity or suspect fraud, you can call 800-923-8282 to speak with a local Census Bureau representative.

So, we can Verify yes, Census workers are canvassing neighborhoods verifying address through October eighteenth.

It’s important to know there are certain questions and information the agency will never ask you for…this includes your social security number, money or donations, anything on behalf of a political party or your bank or credit card account numbers.

For more information on the questions asked on the 2020 Census, click here.

RELATED: VERIFY: No, a citizenship question didn't make it on the 2020 census

RELATED: Need a side gig? 2020 US Census begins hiring campaign

RELATED: VERIFY: Yes, it's illegal if you don't respond to the 2020 Census. Here are the penalties you can face