A day after congratulating his administration for the dramatic drop in cancer deaths, critics ask if it's true he tried to cut cancer research funds. 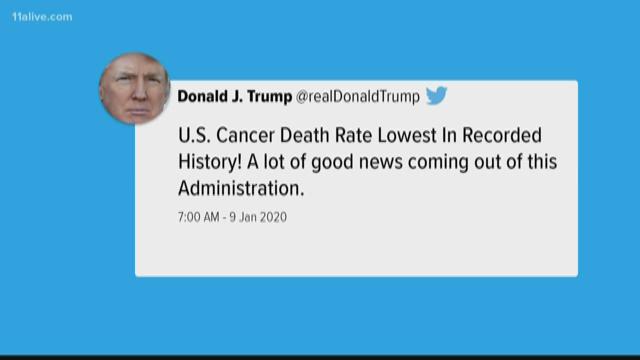 ATLANTA — Wednesday's announcement by the American Cancer Society about the dramatic cancer death rate drop was met with cheers from all corners of the nation. They reported the death rate has fallen by 30 percent since the early 1990’s and largely credit the use of new drugs for the good news.

Shortly after the announcement, President Trump tweeted about the "good news coming out of" his administration. That was met almost immediately with critics claiming he tried to cut the 2020 budget for the National Cancer Institute.

Did President Trump propose cutting the budget for the National Cancer Institute by $900 million this year while letting his administration take at least partial credit for the huge drop in cancer rates?

True. He proposed cutting the budget to National Cancer Institute by $897 million for 2020, though that is not the budget that actually passed.

President Trump’s proposal called for $897 million less than in 2019. We also found he increased funding for childhood cancer research by $500 million over the next 10 years. That averages out to $50 million a year.

However, the budget that recently was approved by Congress and signed by President Trump does not include his original proposal. The actual 2020 budget included more money for the National Cancer Institute. It was given almost $100 million dollars more to fight cancer than in 2019.

VERIFY: Does 90% of ocean plastic come from 10 rivers in Africa and Asia?