Regarding extending voter registration, Gov. Northam said on Oct. 13, "it does not appear that I have the authority to change it." Here's a look at why. 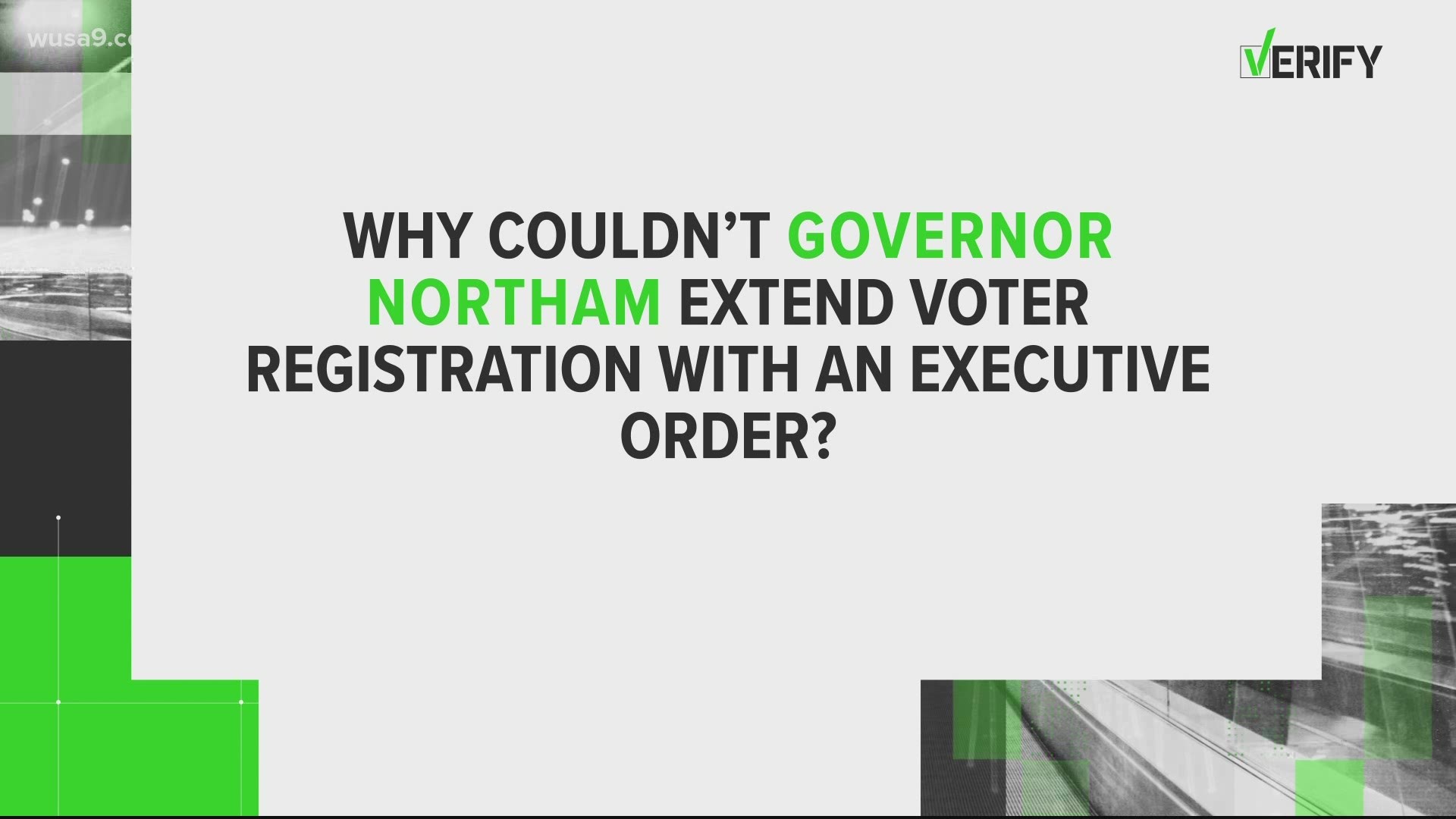 WASHINGTON — When news broke about the severed cable lots of people online were asking the Governor to extend voter registration.

Governor Northam and his counsel addressed this during a recent press briefing.

“We have been exploring all of our options to extend the voter registration deadline," Northam said. "That deadline is set in our code, and it does not appear that I have the authority to change it. That is up to the courts, and I would support a court-ordered extension of the deadline.”

First, under Virginia code, “registration records shall be closed during the 21 days before a primary or general election." This year, that's October 13, 2020.

Here’s the thing: the code doesn't explicitly say who can change that deadline.

“Well, the deadlines are set out in state code," Attorney General Mark Herring told our researchers. "So, these are laws that are passed by the General Assembly, and there's not anyone designated in the state code to modify those. So, we really had to think hard about the best way to proceed and make sure that we were able to protect people's right to vote and get registered."

We asked Governor Northam’s office why an executive order could not extend voter registration, but a lawsuit could. 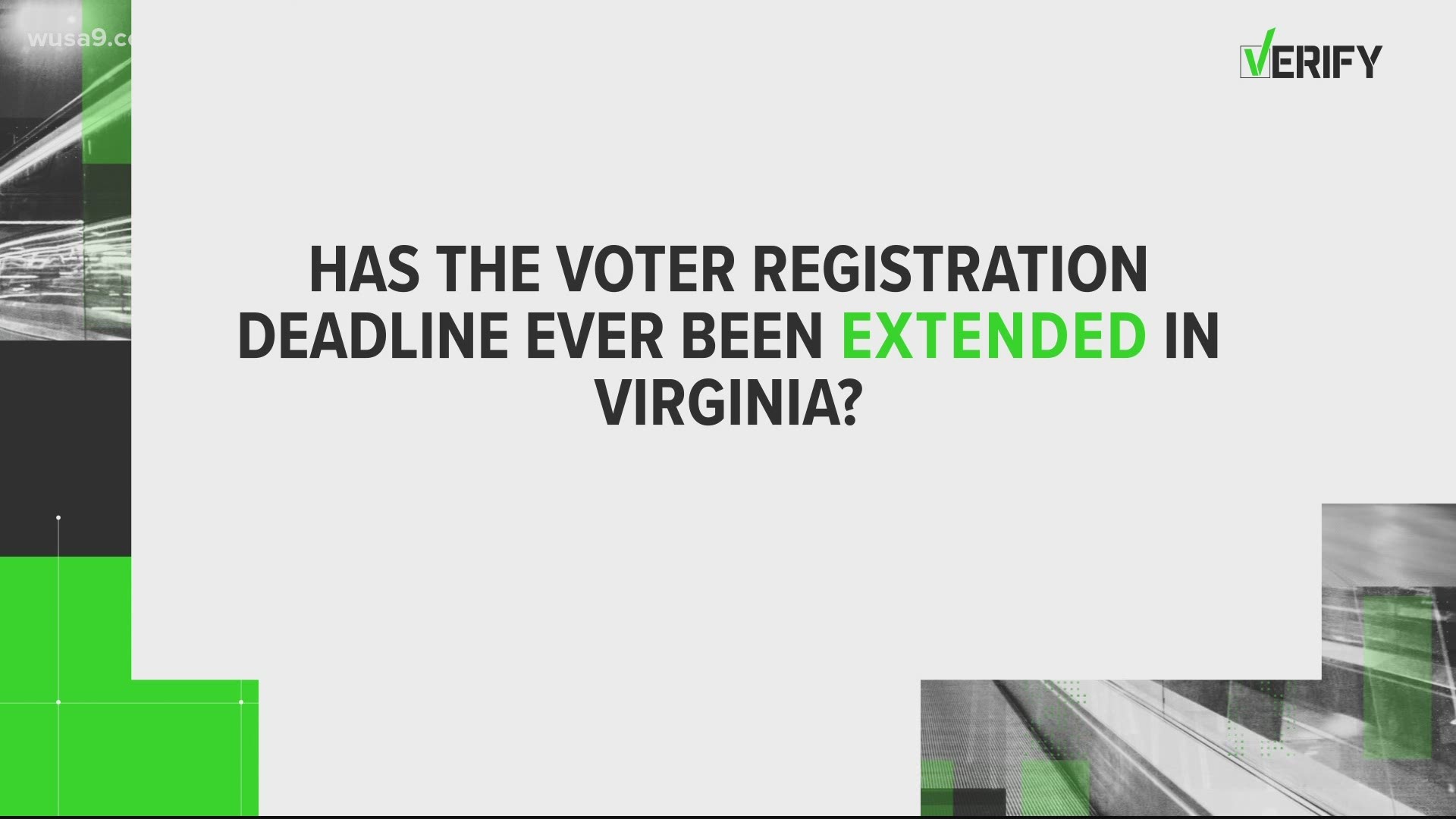 A spokesperson Governor Northam told us since the voter registration deadline is in Virginia Code, it was up to the courts to decide.

“There does not appear to be any legal authority for the Governor to use executive action to change that deadline," a spokesperson, said in part. "The executive branch of government is charged with making sure that the laws are faithfully executed. The judicial branch, however, is charged with interpreting the law and adjudicating how it operates with respect to individual rights...”

Deb Wake, President of the League of Women’s Voters’ of Virginia, who was a plaintiff in the lawsuit, agreed.

She told the Verify team that the Governor doesn’t have the power to extend the deadline. Instead, it's up to a judge -- who has ordered an extension for those in the commonwealth still needing to vote until October 15 at 11:59 p.m.

So, what happened to begin with?

The cable was struck during a county sewer installation project off Route 10, according to Teresa Bonifas, a spokesperson for Chesterfield County.  The sewage project had been ongoing since May 2020 and was to be completed by April 2021, with members of the Virginia Information Technologies Agency (VITA) and Verizon working together to complete it.

A county contractor was working for the sewage installation project, Bonifas said. Under the Virginia Underground Damage Prevention Act, utility operators are required to mark underground lines to help prevent such damages, but this line was unmarked, Bonifas said.

RELATED: VERIFY: Here's what you should do if you receive more than one ballot in DC

Credit: WUSA9
This is the message that voters attempting to register saw during Tuesday's shutdown.

How long was the outage?

The Virginia Department of Elections announced the crash around 10 a.m. on social media. Those attempting to log on to register to vote were instead greeted with messages saying the site was  “temporarily unavailable” due to a “network outage."

"This morning we were alerted by [Virginia Information Technologies Agency] that a fiber cut near the Commonwealth Enterprise Solutions Center was impacting data circuits and VPN connectivity for multiple agencies. This has affected the citizen portal along w/ registrar's offices," Virginia's Department of Elections tweeted.

By 3:30 p.m., election officials said the system was back up and running.