Vice President Mike Pence was at Regent University alongside Congressman Scott Taylor ahead of the midterm elections. The event was free and open to the public. 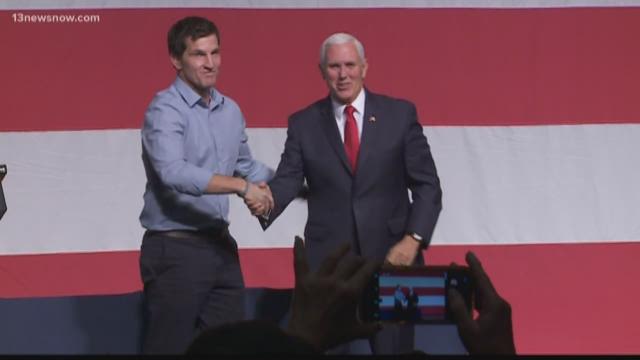 Pence was at Regent University alongside Taylor. The event was held in the School of Communications & The Arts Theatre at 5:30 p.m.

Vice President Mike Pence condemned the mailing of pipe bombs to Hillary Clinton and other prominent Democrats as he stumped for a Republican congressman in Virginia.

Pence said Wednesday in Virginia Beach that whoever is responsible will be brought to justice. He added that "threats of political violence of any kind have no place in the United States of America."

Pence is also set to campaign with three other Virginia Republican congressional candidates ahead of Election Day.

Brat is a two-term incumbent from the Richmond area in a closely watched race against former CIA operative Abigail Spanberger. Riggleman is trying to succeed retiring Rep. Tom Garrett in the 5th Congressional district, which includes parts of central and southern Virginia. McAdams is a longshot candidate trying to unseat incumbent Democratic Rep. Don McEachin.