The 1619 arrival is considered a pivotal moment in American history. It presaged a legacy of race-based slavery that still haunts the United States. 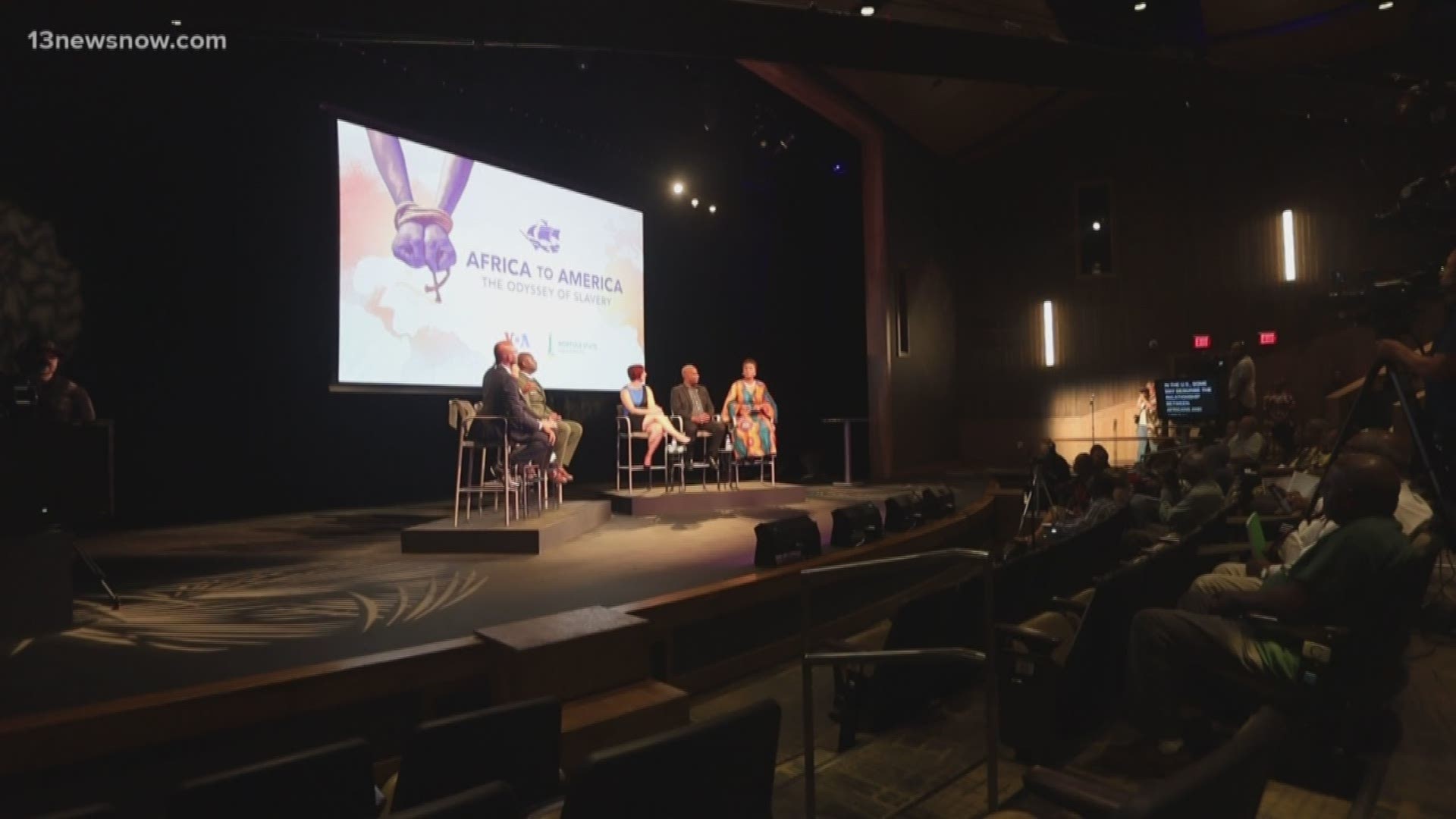 HAMPTON, Va. — Four hundred years after American slavery and democratic self-rule were born almost simultaneously in what became the state of Virginia, ceremonies will mark the arrival of enslaved Africans in the mid-Atlantic colony and seek healing from the legacy of bondage that still haunts the nation.

Yet the weekend ceremonies in Hampton Roads will unfold against the backdrop of rising white nationalism across the country, racist tweets by President Donald Trump, and a lingering scandal surrounding the state's governor and a blackface photo.

The commemoration will include Sunday's "Healing Day" on the Chesapeake Bay where two ships traded men and women from what's now Angola for food and supplies from English colonists in August 1619. A bell will ring for four minutes, while churches across the country are expected to join in.

Virginia's two U.S. senators and its governor will make remarks at a Saturday ceremony. And a family that traces its bloodline to those first Africans will hold a reflection at its cemetery on Friday.

"This moment means everything to folks like myself who are African American and to the folks on the continent of Africa as well," said Mary Elliott, curator of American slavery at the Smithsonian's National Museum of African American History and Culture.

"But it should mean something to everybody, regardless of race," she added, "because it is a moment that defined the nation — what became the nation."

Though little noted at the time, the arrival of the enslaved Africans in England's first successful colony is now considered a pivotal moment in American history.

Englishman John Rolfe documented the landing of the first ship, the White Lion, at what was then called Point Comfort. He wrote that leaders of the colony traded provisions to buy the slaves.

From the White Lion and a second ship, English colonists took more than 30 Africans to properties along the James River, including Jamestown.

By that time, more than 500,000 enslaved Africans had already crossed the Atlantic to European colonies, but the Africans in Virginia are widely considered the first in English-controlled North America. They came 12 years after the founding of Jamestown, England's first permanent colony, and weeks after the first English-style legislature was convened there.

Quentin Kidd, a political science professor at Christopher Newport University, said the commemoration's timing "speaks to the very contradictions on race that have been part of this nation from its founding."

"We want to recognize this historic event," Kidd said. "And at the same time, we have a president who spouts off racist things. And we have a governor who still has not satisfied everybody when it comes to the blackface scandal."

In February, a picture surfaced from Gov. Ralph Northam's medical school yearbook page showing a man in blackface next to someone in Ku Klux Klan clothing. Northam denies being in the photo. An investigation failed to determine whether he was or not.

The Democrat will speak Saturday about "the atrocity of slavery" and "the racial inequities that continue to persist," his press secretary, Alena Yarmosky, wrote in an email.

The 1619 commemoration comes at a time of growing debate over American identity and mounting racial tension, from Washington to the site of a mass shooting in El Paso, Texas.

It also follows recent racist tweets from Trump. One called on four Democratic congresswomen to "go back" to their home countries, even though three were born in the U.S. Another tweet attacked Democratic Rep. Elijah Cummings, calling his majority-black Baltimore district a "disgusting, rat and rodent infested mess" where "no human being would want to live."

Yet Trump also signed into law the "400 Years of African-American History Commission Act," requiring a panel to develop programs that acknowledge the Africans' arrival and slavery's impact.

Among the commission's members is Terry E. Brown, the first black superintendent of the Fort Monroe National Monument, a former U.S. military base in Hampton that is on the site of the Africans' 1619 arrival.

"For me, a great nation pays attention and remembers its history no matter how complex it is," said Brown, who will launch the countdown for the bell ringing on Healing Day.

Brown said the idea of Healing Day is for people from all walks of life "to talk, to laugh, to cry and in some small way to break the insidiousness of racism."

"I want the nation to walk away knowing that the contributions of Africans and African Americans in this country are so significant that they warrant an anniversary like this," he said.